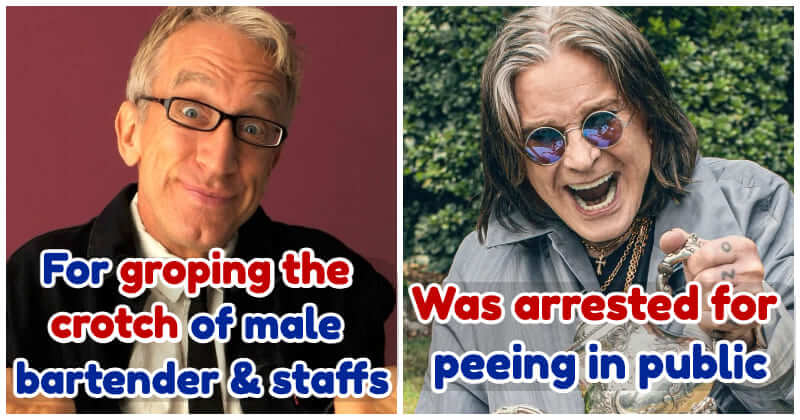 We “ordinary” people still tend to put celebrities on a pedestal and make them role models. This is why we become obsessed with entertainment news sites whenever a story breaks about a scandal or legal issue involving a celebrity. Just like the rest of us, celebrities have humiliating incidents in their past that they would just as soon forget ever took place.

Sometimes, these awkward incidents involve the police and an arrest; even though embarrassing arrests happen to average individuals, it seems much weirder when a celebrity is arrested. Ozzy Osbourne may be best known for The Osbournes, but he’s also a heavy metal icon. As Black Sabbath’s lead singer and solo performer, he’s been called the “Godfather of Heavy Metal.” Ozzy was arrested for public urination and drinking in Texas in 1982. Ozzy urinated on a statue in the Alamo, a source of pride for native Texans. He was released on a $40 bond and banned from San Antonio for ten years until he donated to the Daughters of the Republic of Texas, who maintain the Alamo. George Michael rose to stardom in the 1980s and 1990s with his post-disco dance-pop music. Michael has sold more than 80 million records worldwide, but that doesn’t prevent lawbreaking. In 1998, an undercover police officer detained him for “indecent behavior” in a Beverly Hills park lavatory. Michael admitted the undercover cop followed him into the bathroom, where they played “I’ll show you mine, you show me yours.” He pleaded not guilty, served 80 hours of community service, and paid 810$. Eddie Murphy is remembered for his stand-up, SNL appearances, and roles in The Nutty Professor, Dr. Dolittle, and Shrek. Murphy was stopped in 1997 while driving with a transsexual prostitute. Murphy stated he was a “good Samaritan” by giving the prostitute a ride, which worked since he was let go while the prostitute was jailed. This incident may not have resulted in the celebrity’s arrest, but it was included because it was embarrassing for Murphy. Andy Dick is a TV actor known for his controversial stand-up comedy. Dick has been arrested multiple times, but his most odd arrest occurred in 2010 when he was charged with sexually abusing a bartender and a patron. Dick pleaded not guilty, posted a $60,000 bond, and had the charges dropped following delays and good behavior. Both victims sued Dick for unspecified damages. People will always remember Shia Labeouf from Even Stevens and the Transformers movies. Shia’s most odd run-in with the authorities occurred in 2007. After refusing to leave a Chicago Walgreens, Labeouf was detained. Shia admitted he was inebriated and only went Walgreens to buy cigarettes (which he didn’t). Shia’s criminal charges were dropped, and he now warns against “drinking and buying.” Charles Barkley played 13 years in Philadelphia, Phoenix, and Houston and is now a TNT analyst. He was busted for DUI in 2008 after running a stop sign with a female passenger. His blood alcohol level was double the legal limit at the time of his arrest, but what makes this case so unusual is that he admitted to blowing the stop sign because he was in a hurry to have oral sex with his female passenger. Barkley pleaded guilty to DUI and spent three days in jail. Matthew McConaughey has been a known big actor since his breakout appearance in Dazed and Confused. He may have starred in several bad romantic comedies, but with his role on HBO’s True Detective and his Oscar-winning performance in Dallas Buyers Club, he proved to be a good actor. In 1999, he was arrested in Texas for drug paraphernalia. This arrest is strange because the cops responded to a noise complaint from one of Mcconaughey’s neighbors. When the cops arrived, they found McConaughey playing his bongos while nude and dancing. All charges except the $50 noise fine were withdrawn.

Two Familiar ‘Sisters’ From “You Belong With Me” Will Reunite In Taylor Swift’s Midnight Album?

5 Already Famous Actors Who Had To Audition For The Roles

Top 15 Famous Celebrities Who Had Kids Before 20