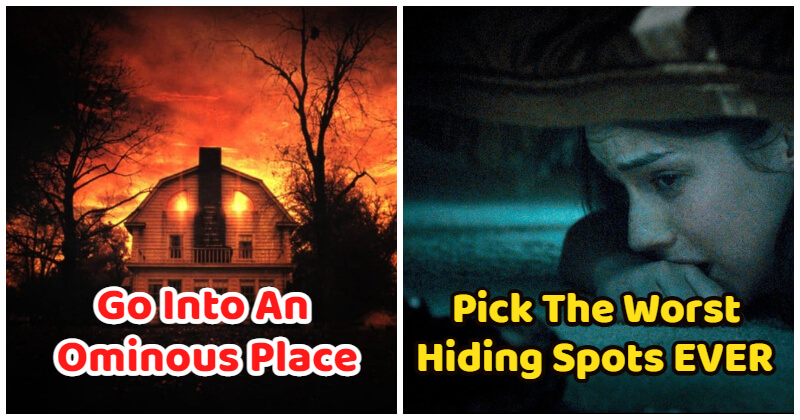 Have you ever watched a horror movie expecting to be scared, only to feel anger because of an overused trope instead? For the horror fans out there, we feel you. Sometimes the actions of the characters are just completely ridiculous. Their stupidity makes us wanna scream “Why did you do that!?” to our screen in frustration. Their choices make no sense!

So let’s gather around and see what are the worst clichés in horror movies that are more annoying than scary. What trope do you loathe to see? Countless horror movies happen to take place in an ominous place that normal folks will never set a foot in. A dark basement, a creepy cabin in the middle of nowhere, or a haunted house where people previously died or disappeared in there. These places are bound to be trouble, yet the main characters still stay. It should be obvious to move out after the walls of your house start to bleed. Where is your common sense? What is worse than staying at a haunted place with ominous signs? Investigate those ominous signs ALONE. Have any of these characters heard of the buddy system? It seems unlikely, as every group of friends in horror movies decides to split up as soon as they hear or see something suspicious. By walking around on your own, your chance of being taken down just skyrockets. Everyone should stay together and figure out how to survive. Why is it that the parents in these movies always ignore what their kids told them? Sure children can say the silliest things ever, but if your kids suddenly tell you there’s a spooky man in her room, or draw some creepy painting about a dark figure, then trust them and get help immediately. Don’t wait until they start to levitate and speak Latin.

4. Answer Late-night Phone Calls When They’re Not Expecting A Call Friends and families rarely call in the middle of the night, and if it’s a call from an unknown number then you should just ignore it. It will help you on saving your money on your phone bill, or wasting your time on scammers, or getting killed if you’re in a horror movie. The more advanced cell phone technology gets, the more difficult it is for us to watch this trope. As soon as you get yourself into a dangerous situation, your phone becomes useless. It’s either has no reception, on low battery or just straight out dead. We get it that it’s meant to show that the person is in real trouble, but it just feels too convenient! This trope is really overused at this point. How many times can you trip while running? Not much if you’re a real person in real life. A lot if you’re a character in horror movies. Whenever a pursued character is running away, they are destined to fall. No matter if the ground is completely flat and they’re wearing sneakers, some unseen force will cause them to trip and fall. That’s just a convenient way for the killer to catch the protagonist.

And the worst part about this cliché is that they continue to crawl the rest of the way instead of getting up and running like a normal person in real life would.

7. Running For The Staircase Instead Of The Door When a murderer is running after you, going for the stairs instead of the front door is the worst decision you can ever think of. If you run upstairs with the hope of exiting through a window, chances are you’re gonna plummet to the ground with some serious injuries. If you run down the basement, well it’s the endgame for you as you have no place else to run to. Obviously, you should always go for the front door. But the characters just can’t help themself. Directors and screenwriters call it the “fight or flight” instinct, but we all know that it’s just plot convenience. Another way to corner yourself is to hide under a bed or in a closet. Think about it. Where is the first place that you will go looking when you’re the seeker in a hide-and-seek game? Yeah, it doesn’t take a genius to go for the closet or the bed. The serial killer who is chasing you think the same. Just like the phone, as soon as you get chased and need to get away, your car will bound to be useless. The car can magically run out of gas, or its engine won’t start when the killer gets close. We understand that this detail is to push the tension of the movie up to the nail-biting level, but nowadays it’s just frustrating. And last but not least, the most annoying trope of all: Excessive jump scares. Nowadays horror movies a filled with them. A good jump scare can leave you haunted for days. Unnecessary jump scares are just tiresome. A good horror movie rarely relies on jump scares to be scary.

Then And Now: Photos Of 15 Famous Long-Term Celebrity Couples