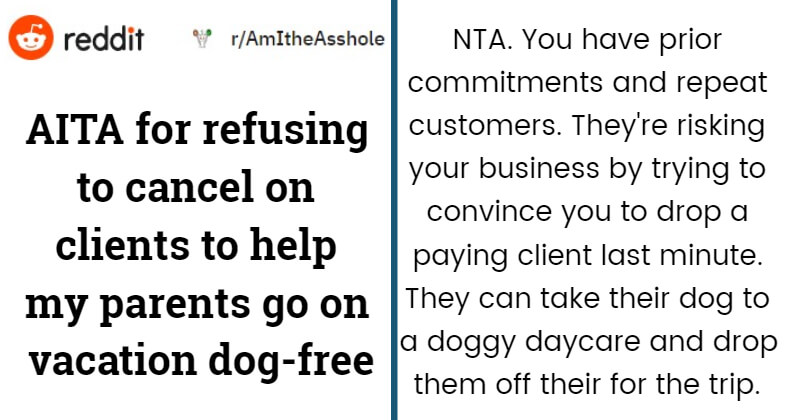 Undoubtedly, it is inevitable to encounter entitled people though we all wish to avoid them as much as possible. These people often drive others mad as they believe the whole world always revolves around them. Therefore, they blame anyone for not doing as they expect. Unfortunately, while we could easily overlook an unreasonable stranger on the street, we are likely to struggle with entitled individuals having much impact on our lives, such as bosses or neighbors. In the below story, the poster is tired of dealing with her irrational parents. A woman took her story on the popular subreddit AmItheAsshole to ask if she was terrible for prioritizing her business over her parents’ request, and the internet supported her.

The poster provided dog walking and pet sitting services, and her clients often booked about 6-9 months in advance. During peak travel time or holidays, they may book for a year before the due date. The Redditor tried her best to manage sudden cases, but she would be frank with the clients if she couldn’t make it.

In June, her parents asked her to take care of their 15-year-old dog for two separate weeks in July when they would be on vacation. Though the Reddit user could accommodate the first week, she refused to help in the second week because that time had been booked almost a year prior. When she informed her parents about this, they seemed to understand the situation.

According to the Redditor, the first week was horrible when she had to look after her sister’s 3 months old dog beside her parents’ dog. As the two dogs weren’t used to living together, the woman had to ensure they were kept separately to avoid fights. In addition, she struggled to keep the hyperactive puppy away from the senior dog.

After the first set of dates, the user’s mother expected her to take care of the pet in the second period, impervious to her words a month ago. When the poster explained to her mom again, her mother wanted her to cancel the booking on those days. The woman refused to do it because her parents changed their minds at the last minute, and they could still take the dog on vacation with them if they wanted.

The poster’s mother then accused her of being hard on them. This annoyed the Redditor as she believed she did nothing wrong. She had made it clear to her parents multiple times that her schedule was occupied, but they intentionally ignored what she said.

In response to the thread, netizens sided with the poster while roasting her parents for their ill manner. The user was apparently not responsible for their pet, so it wasn’t her fault if she couldn’t take care of it. Netizens agreed with the woman’s action because her business depended much on word-of-mouth, which meant she should be careful about her credibility and reputation.

What do you think about the poster’s parents? Would you react as the woman if you were in her position? Please share your view with us in the comment below!

Meet Starlight, The Sunburned Kitten Grows Up To Be Gorgeous And Fluffy

Meet American Dipper, The Only Aquatic Songbird In The World That Can Walk Underneath The Water