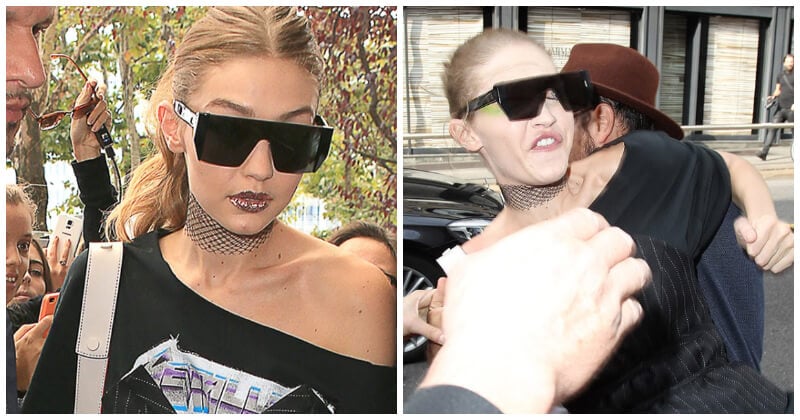 There’s nothing wrong with admiring famous people and expressing your admiration and love for them. And it’s understandable if you can’t hold back when seeing your idol in real life. Normally, we can see fans tend to burst into tears, scream and shout out of their lungs when meeting celebs that they love for a long time.

Still, there are many cases even can’t control themselves and behave too overly. That’s called “crazed fans”. They uncontrollably reach out to the idols and brutally grab them. Sometimes, they leave some accident to the idols they love. They likely think that’s the way to make their idol remember them.

In this post, we compiled 10 times famous people who have been attacked by crazed fans. From hugging, and snatching to even stabbing, they’re so terrifying. Keep scrolling down to check them out. In 2022, the Netflix Is A Joke event was held in Los Angeles, California, and controversial comedian Dave Chappelle performed there. A man slipped onto the stage as Chappelle was performing his routine and threw him to the ground. After a brief altercation, the man rose to his feet and sprinted past numerous security personnel in the direction of the backstage area.

Unluckily for him, the enormous number of people hunting him down eventually caught up with him. Chappelle made light of the situation while joking with the audience. The police charged the intruder, who had weapons on him. Thankfully, no one was seriously injured. Then Chris Rock entered the stage and playfully inquired as to Chappelle’s identity. A crazy “fan” who is actually a serial attacker of celebrities named Vitalii Sediuk grabbed Gigi Hadid as she was exiting a fashion event during Milan Fashion Week and snatched her up. As the tough former boxer and volleyball player that she is, Gigi elbowed him in the face to get him to free her.

When media sites falsely claimed that Gigi had attacked a fan, she refuted their claims by stating that Vitali had intruded into her personal space and that she had every right to protect herself. Miley Cyrus was attempting to get to her car with Liam Hemsworth in 2019 while performing at the Primavera festival in Barcelona, Spain. While the gathering of fans was unruly, things were contained. Up until a fan saw a security lapse and grabbed Cyrus by the neck. Then, as she struggled to escape, he attempted to kiss her. Security quickly removed that improper fan.

Fans of Miley often approach the singer in an inappropriately close manner. She performed “The Climb” in 2011 in Melbourne, Australia. A fan hugged Cyrus after sneaking up next to her and slipping onto the stage. As another guard dealt with the fan, security escorted the startled Cyrus off the stage. There seem to be a lot of really loyal fans drawn to the Queen of Pop. During a 2017 performance in Las Vegas, Nevada, Spears just finished performing “(You Drive Me) Crazy.” As she looks around, Britney discovers her security has put a gentleman to the ground on stage. After she wonders what’s happening, security removes her off-stage while other guards and backing dancers deal with the person. Later, she came back to complete her set.

In 2009, Spears was involved in yet another incident in Connecticut. A fan unexpectedly arrives in front of her and starts dancing as she sings “Womanizer.” The backing dancers pounce on Spears as he retreats in shock. Fortunately, she quickly regains her bearings and continues the song. When Justin Bieber’s Believe tour 2013 stopped in Rio de Janeiro, Brazil, was about to come to an end, a fan stormed the stage, jumped on Justin, and waved to the crowd while doing so. Fortunately, security personnel nearby swiftly took charge of the issue and escorted the guy off stage, but Justin’s experience could not have been nice. Another celeb who was attacked in a concert in 2013 is Beyoncé, and also in Brazil like Bieber. One extremely crazed fan decided it would be a good idea to grab Beyoncé as she sat on the stage while singing close to the audience. I have no idea what their strategy was, but rushing security dragged the singer away and stopped them.

She resumed her set right away, acting as if nothing had happened. Beyoncé went into a mosh pit to have fun while watching her husband Jay-Z play at “Radio 1’s Hackney Weekend” the year before. But things quickly turned ugly as a belligerent supporter started cursing at her. Security immediately arrived and kept the two apart. Although WWE wrestling and feuds are just performances, many fans keep thinking as if they’re real. Seth Rollins at this time acted as a heel character and gained much hate from viewers. One audience scales the barrier, dashes up the ramp, and spears the wrestler.

However, Seth “Freaking” Rollins already has the attacker in a chokehold while security and authorities arrive at the spontaneous altercation and restrain the attacker. The startled audience watches as The Architect stands up at this point and starts cursing and making fun of the man. Unsurprisingly, the attacker was taken into custody immediately after his idiotic appearance. Morrissey’s performances appear to frequently feature stage trespassers who give the former Smiths singer sensuous hugs while he continues to perform. 2014 was no different in San Jose, California. But during the encore, things really heated up. As Morrissey continued to shout his song, more and more fans came onto the stage to embrace him. Poor security personnel had a difficult evening as audience members kept flooding the stage.

At some point, the situation became so terrible that Morrissey was knocked to the ground by the melee and was unable to continue performing. The group quickly hurried to assist in removing the clueless devotee. Even so, the gig had to end abruptly due to this incident. Slash is a rock music legend. And he furthered his notoriety in 2010 when performing in Milan, Italy. The Guns N’ Roses guitarist was in the middle of an impressive solo while playing the well-known “Sweet Child O’ Mine.” However, a topless fan suddenly materialized from behind and started charging the unaware Slash.

A security guard hilariously rugby tackles the fan off the stage as soon as the other person touches him. Slash scarcely notices the interruption and keeps performing. A technician had to replace the guitar because it had been harmed by the fan incident. Perla Ferrar, Slash’s ex-wife at the time, claimed that the fan descended from the rafters for his brief presence. At just 20 years old, Monica Seles was the top-ranked female tennis player in the world in 1993. She faced Magdalena Maleeva in the quarterfinals of the Citizen Cup that year in Germany. Seles was ahead in the game during one of the gaps in the action. The tennis legend was stabbed in the back with a knife by a fan who crept up behind her as she rested.

Security tackled and detained the attacker before he could lunge again. Steffi Graf, a rival of Seles, was apparently the target of the attacker’s obsession. Despite being physically okay after the incident, Seles missed two years of professional tennis. That terrible day in 1993 didn’t let up for her throughout her career, even after she returned.