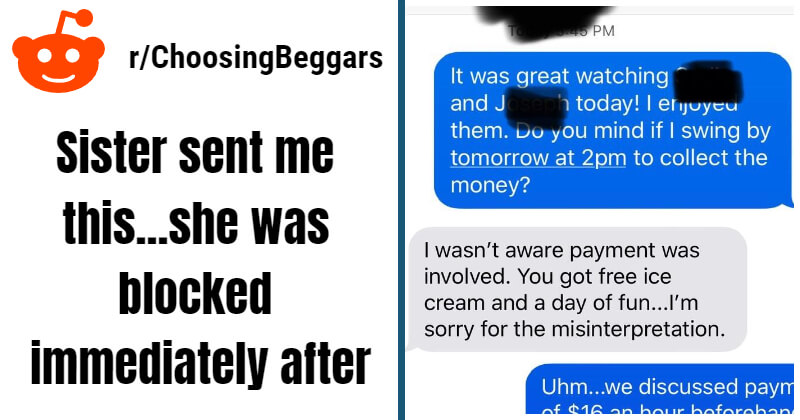 We all know that being a mother is never easy, especially in the modern era when women can pursue a career like men. Mom has to sacrifice their time, job, and even hobbies to take care of their children. As a result, babysitters are all the rage to help mothers look after their kids in exchange for a reasonable wage. However, can you imagine a woman who pays her babysitter with ice cream and a day of fun? Lately, the user u/VortexThing posted their sister’s unbelievable story to the subreddit r/ChoosingBeggars and gained over 84,900 upvotes and 4,300 comments from the internet.

The thread with the caption “Sister sent me this…she was blocked immediately after” included four screenshots about the conversation between Redditor’s sister and a woman. The user’s sibling was a babysitter, and in the message, she asked the kid’s mother about the time she could get her money. Surprisingly, the woman replied that she was under the impression that the babysitter voluntarily did the job. She added that the poster’s sister had got free ice cream and a happy day with her kids as if that was enough to compensate her wage. When the babysitter mentioned the number they had agreed on before, the mother wanted her to show the evidence. Therefore, she sent the woman a snapshot of their consensus. According to the texts, the mother had concurred that she would pay $16 for an hour of babysitting. Nobody could imagine she would refuse to pay for the babysitter after reading the conversation. Nonetheless, the mom claimed she had deleted all the messages. In contrast, the babysitter emphasized that she needed to receive her money. The mother continued startling the public by accusing the babysitter of being arrogant. She believed $16 per hour, which meant $128 for an 8-hour working day, was incredibly expensive. She offered $20 for a day because it was easy to handle her children. Though the babysitter conceded and hoped to be paid only $100, the woman roasted her for being conceited. Eventually, the mother blocked the poster’s sister without paying her what she deserved. The internet raged at the mother’s demeanor in the story. Undoubtedly, she tried to steal money from the babysitter. Netizens mocked her ridiculous excuse about deleting messages often and her delusion that free ice cream and a fun day could pay for a babysitter.

Many encouraged the babysitter to take the case to small claims court. They believed that if she gave it in, many other babysitters would likely suffer from this terrible mother. Some also suggested she shame the woman on social media until she got her wage.

What do you think about the mother in the thread above? What advice can you give to the babysitter in this situation? Have you ever been through a similar circumstance? Please write down your thoughts and ideas in the comment below!

Teenager Slammed By Stepmother For Not Giving Room For Stepsister, But Reddit Cheers Her On

Discover Internet Habits Of A Virgo Through 15 Hilarious Memes

If You Can Spot These 10 Movie Mistakes, You Have Eagle Eyes

Sagittarius Are Children Who Never Grow Up, Showing In 20 Memes

20+ Amazing Pictures That Reveal The Secrets Behind The Scene

Aggressiveness – Sign To Identify An Aries, Proving In 16 Hilarious Memes