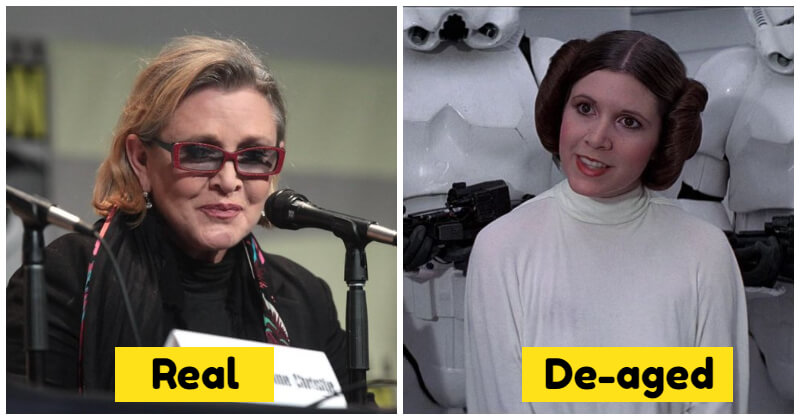 While acting means actors can become any character the script needs, there is one character they cannot: their younger selves.

Yes, it’s impossible for actors to play their younger selves in movies. Usually, when movies need a flashback of a character, a younger and different actor will play the younger version of the character in question. The actors will have to share similar physical traits, which makes casting a very different task.

Not to mention ageism. Unless you have proven yourself with loads of awards, Hollywood always favors the younger actors. And even these actors find their pool of acting projects shrinks as they get older.

But not anymore! Thanks to the advances in CGIs, now we can de-age actors to their younger selves. Means, there are a lot more options for actors whose looks have long past their prime.

So, which actors were brought back to their prime with digital de-aging? Here are 15 de-aging success stories of solder actors. In ‘Pirates Of The Caribbean: Dead Men Tell No Tales,’ Johnny Depp was 54. But for the flashback sequence, he has to look like a teenager. And he did, thanks to de-aging technology. When he was in ‘Captain Marvel,’ Samuel L. Jackson was 70. But as the story takes place decades ago, he was de-aged instead of recast. When he was in ‘Terminator: Salvation,’ Arnold Schwarzenegger was 61. But he was de-aged to play the T-800 in the past (or future?) In ‘Guardians Of The Galaxy Vol. 2’, Kurt Russell was 66 years old. But for the flashback scene on Earth, h was de-aged to his mid-thirties. Robert De Niro was 76 when he was in ‘The Irishman.’ But digital de-aging takes a few decades off of him. In ‘Ant-Man And The Wasp,’ Michelle Pfeiffer was 60. But she looked a lot younger in the backstory, because of digital de-aging. Anthony Hopkins was 78 when he appeared in ‘Westworld’. But he looked a lot younger with digital de-aging. Michael Douglas was 70 when he starred in ‘Ant-Man.’ But for the backstory sequence, he was de-aged. In ‘Rogue One,’ Carrie Fisher was 59. But she was de-aged to look the same as Princess Leila in her heyday. For a flashback sequence, of course. When he was in ‘Captain America: Civil War,’ Robert Downey Jr. was 51. For the flashback sequence, he was de-aged to his teen. Al Pacino was 79 when he starred in ‘The Irishman.’ Like his fellow actors in the movie, he was also de-aged in flashback sequences. When he was in In ‘The Curious Case Of Benjamin Button’ Brad Pitt was 44. But he was de-aged to his early-20s in this heavy flashback movie. In ‘X-Men: The Last Stand,’ Sir Ian McKellen was 67. But he looks a lot younger in the flashback sequence, thanks to de-age technology. In ‘The Hobbit’ Orlando Bloom was 35. But as elves don’t age, he was de-aged to look the same as Legolas when he was in LOTR.

When he appeared in ‘’Pee-Wee’s Big Holiday,’ Paul Reubens was 63. But he looks decades younger thanks to digital de-aging, as the movie takes place long ago.