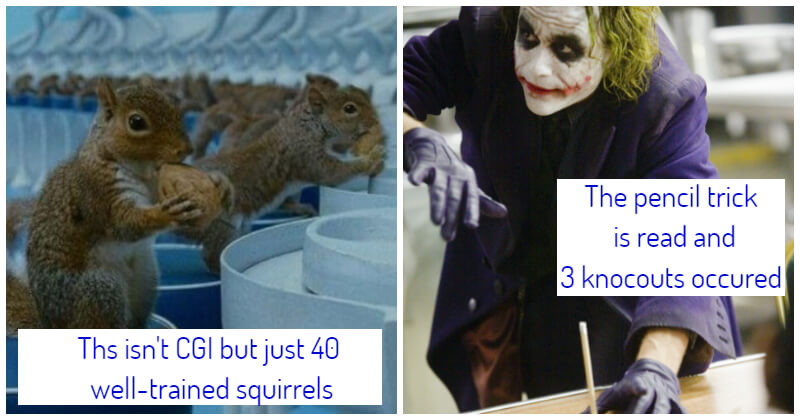 With CGI being rampant in the movie industry, it seems like everything is possible… Before, to get a special shot, actors, directors, makeup artists, and cameramen had to go through the wringer, with dozens of shots retaken just to get that one perfect shot.

But now, thanks to CGI, a lot of cool shots in movies can be done with ease… and money. Creating the images digitally takes a huge load of work off the movie crew when it comes to making awesome movie magic.

However, some movie aficionados argue that digitally creating movie shots kills the magic. Well, they might be right. Some of the most classic movie scenes in cinema history are filmed by hand. Gruelingly, one takes after another until the director gets the perfect shot.

So, do you know about all of these practical effect movie shots? Even movie fans don’t know about these 15!

#1 Mission Impossible 2 (2000): As many practical effect shots as possible Tom Cruise requested John Woo that this shot be taken during the knife fight sequence; no CGI was utilized, and the knife was hooked to a steel cable.

#2 The Dark Knight (2008): The Disappearing Pencil Trick Was Shot Practically The famous Joker pencil scene took two days and 22 takes to film. Nolan chose to perform the act for real, with the stuntman pulling the pencil away at the last second, and the sequence reportedly had “three knockouts” while filming. Source: The Lord of the Rings: The Two Towers / New Line Cinema

One of the Rohan warriors had only one eye at the battle of Helm’s Deep. This was not a CGI effect. Peter Jackson let extra Wayne Phillips flaunt his condition.

#4 The Spider-Man (2002): Tobey Maguire Caught The Items On The Lunch Tray Manually The lunch tray scene was not CGI. Tobey Maguire needs 156 takes to pull it off on camera.

Instead of utilizing CGI, the movie production spent 19 weeks training 40 actual squirrels to sit on a stool, crack nuts, and drop them onto conveyor belts.

#6 Terminator 2 (1991): Some of the best tricks were done via practical effects

With the assistance of Linda Hamilton’s twin sister, Terminator 2 (1991) included some awesome practical effects! When Sarah puts a hole in the T-800’s skull, a replica of Schwarzenegger’s head appears in the foreground, the actual Schwarzenegger appears as his own reflection, and Linda’s twin sister imitates her motions.

#7 Interstellar (2014): The Corn Was Planted By Christopher Nolan Christopher Nolan planted 500 acres of maize specifically for Interstellar because he did not want to CGI the farm. After shooting, he went around and sold the maize, recouping his investment.

For the Basketball scene, Sigourney Weaver rehearsed for two weeks and made the shot in one take. The shot employed no camera trickery or CGI. The combat sequence in the hotel in Inception was done without CGI. The actors were actually struggling! Scott really throws a bundle over his shoulder into the garbage bin in one shot. Director Edgar Wright wanted the throw to be real for credibility in a film with so much CGI and SFX. It took him 33 attempts. Instead of utilizing CGI or wires to achieve the sense of zero gravity in Apollo 13 (1995), the filmmakers employed a cushioned, windowless Boeing 707 that soared up to 30,000 miles, allowing them a 23-second time frame to capture the shots. The actors and crew did this roughly 40 times. Martha May Whovier’s Christmas light gun would be too expensive and time-consuming to recreate in CGI for the live-action version of How The Grinch Stole Christmas, so the actual prop gun was made to wind up and pluck the lights off the home, and the film was simply played in reverse. When Jackie is fighting Benny Urquidez, Benny’s kick is so powerful that it extinguishes all of the candles without the use of any special effects or CGI.

For inside shoots in the sky tower sequences, 12 projectors were utilized instead of green screens. This meant that the sky would be mirrored in the players’ eyes and on the house’s surfaces.

What These 9 Celebrities Would Look Like If They Aged Naturally