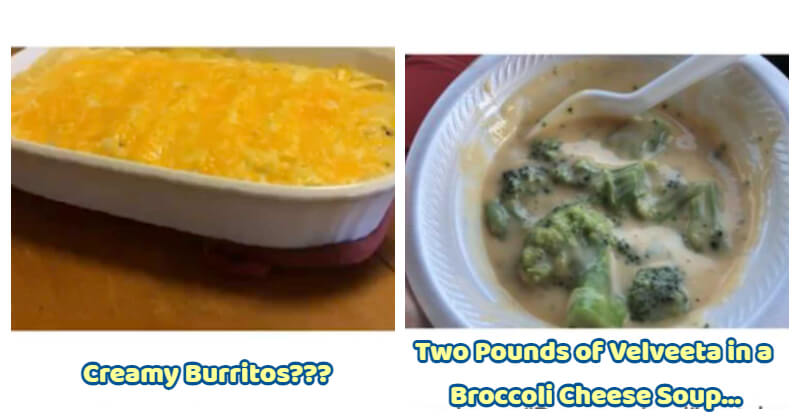 19 Kids and Counting is a marvelous show, attracting audiences of all ages with its unique concepts. Fans can’t wait for the weekly Tuesday to enjoy the life around the Duggar family, especially how they raise 19 kids. Each member of the family earns a great number of fans. And some members’ activities on social media pretty much draw attention. One of them is food sharing.

Over the years, several Duggar members have shared their ultimate recipes. Many of them are made with a tight budget to feed a huge crowd. However, some of their recipes are really strange that even spoil our appetite. Even when we are not someone like Gordon Ramsey, we can still want to critique these “freaking” ones.

In this post, we’ve enlisted the top 15 weirdest Duggar Family recipes that ignite many controversies. Keep scrolling down to check them out. Warning: This post may not be suitable for someone who is enjoying their incredible meals. The first dish is from Jill Duggar – Momma’s Stew. The former Counting On star shared that she grew up eating this stew, but it was one of those recipes that her mom didn’t have written down in her recipe box. And you know, we wished that her mom did it.

This stew is made from ketchup, canned veggies, and a ton of sugar. That even spoiled my appetite once thinking about that. Now is Spaghetti Pie, a name that may spark your curiosity, yet it turns out … a blatant mess. It seems like lasagna rather than spaghetti and crammed in a pie crust. We really can’t understand how Jill’s husband loves that “spaghetti pie” As busy people, we hand down approve the quick cooking for an easy dinner. But this Chicken ‘n a Biscuit really has something wrong. Canned chicken is used instead of fresh, along with gravy, cheese, and three cans of crescent rolls. That used to serve all the Duggars at once. There’s nothing wrong with the name, but the way Jessica made it is wrong a fair bit. Before combining the remainder of the ingredients for the soup, including a cup of heavy cream, onions are sautéed in a whole stick of butter. Who wants to try that now? This could be the most “normal” recipe out of Duggar foods on this list. But what ties us up in knots is the number of muffins they made – 11. We always make 6 or 12 muffins at a time. How can they make 11??? Broccoli Cheese Soup seems to be another normal recipe from the Duggar family. But what’s wrong with that is two pounds of Velveeta (yet again), along with an entire quart of sweet whipping cream were added instead of real cheese. Imagine how sweet it is!!! It’s not a typo, it’s really called “baguette bread”. But what made this Anna’s recipe confusing is that it’s not baking bread, it’s something already made. Then slice it up and spread it with a whole block of cream cheese, tomatoes, and basil. Barbecue sauce and tuna fish don’t usually go together, but this recipe, which Jill says is one of Jim Bob’s favorites. Blend drained canned tuna, your favorite barbecue sauce, and onions on bread or saltine crackers. Jill claims it’s a hit with the kids, but we have our doubts. We’ve seen a lot of recipes that call for Fritos over the years, but Michelle Duggar may be the first to call them “good for you.” She’s stated that this is her go-to recipe when she needs dinner on the table quickly. It has ground beef, chili beans, cheese, and sour cream, as well as Fritos.

#11Chicken on the Ritz Normally, we’d be down for any meal that involves Ritz crackers, but Chicken on the Ritz is a completely different beast. This one mixes cream of mushroom soup, a container of sour cream, a stick of butter, vegetables, a staggering 10 pounds of chicken, and an entire box of Ritz crackers to make Michelle’s favorite casserole. We don’t normally associate the descriptor “creamy” with burritos, but here we are. This recipe originated from one of Jill’s friends, and it’s a little suspect, especially since the cream of mushroom soup and whipping cream aren’t generally considered burrito ingredients. Tater Tot casserole is one of the most renowned – and notoriously awful – Duggar recipes. This dish is fairly satisfying because of the high carbohydrate content, but keep in mind that tater tots are processed and often contain additives and chemicals. Furthermore, the recipe asks for two canned soup concentrates, which are high in salt. Ground turkey is the only thing that makes tater tot casserole healthy. This dish comes from Jessa (who says it’s a Seewald family favorite, so perhaps her husband Ben is to blame). Combining bacon with vegetables isn’t unusual, but it’s a bit of a puzzle that the recipe calls for frozen green beans and bacon bits rather than fresh beans and cooked bacon. Chicken Etti is Anna’s family meal that has been incorporated into the Duggar repertoire. It tastes just like chicken and noodles. It wouldn’t be a Duggar dish without a pound of Velveeta and a can of cream of chicken soup, of course.