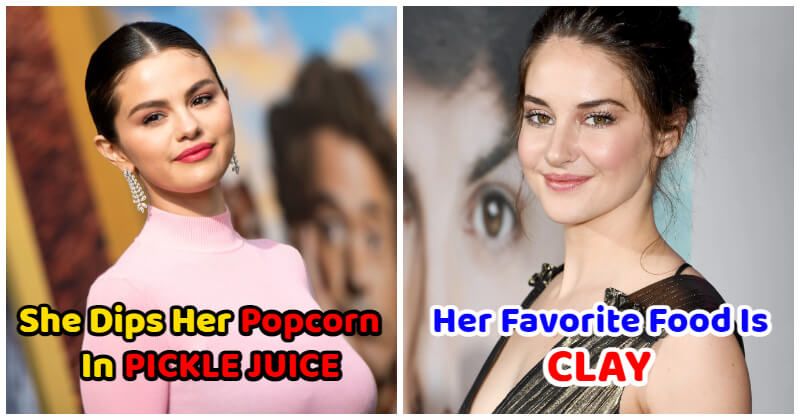 Everybody knows that most celebrities are eccentric. In some cases, that will extend to the food they eat. Their preferences are quite interesting, if not outright bizarre. From peanut butter scrambled eggs to pickle pepperoncini juice, these celebs’ favorite foods are most definitely NOT just any ordinary comfort food.

Read on to know more about the weird, wild, and wacky culinary world of some of the most famous stars. Are you brave enough to try their favorite foods?

1. Shailene Woodley Is Into Eating Clay Shailene Woodley’s favorite food to eat isn’t even food. It’s something that most of us would never eat: Clay. Yes, you read that right. In a 2014 interview with Into the Gloss, Woodley declared her love of eating clay, insisting it’s “one of the best things you can put in your body.”

Woodley was first turned onto the idea by an African cab driver. She explained the health benefits that clay could give your body in interviews before. In her 2014 appearance on The Late Show with David Letterman, when curious host Letterman questioned her about the clay-eating habit and asked her what was the difference between clay and dirt, the actress admitted that she was “not smart enough to answer that question.” Forget salt and butter! According to the famous singer Selena Gomez, you should upgrade your popcorn by dipping it in pickle juice. She dubbed her bizarre food combo “Texas popcorn.” Basically, you pop a bowl of popcorn then toss everything with pickle juice, Tabasco sauce, and a pinch of salt. Will the Texas popcorn taste good, or completely ruin your movie night? You decide. Halle Berry once shared with The Insider that she has been experiencing cravings for salty things during her pregnancy, especially pepperoncini. These peppers are mild and sweet Italian peppers that have a slight heat.

There is nothing wrong with liking them, only the famous actress didn’t just stop at the pepper. No. Her comfort food was the brine. “I just eat them out of the jar and then drink the juice!” Halle said. Despite being known as a Food Network chef, Giada de Laurentiis has one weird food combination that will make many people cringe. And that is dipping cookies in lemonade. Yes, lemonade, not milk.

The chef shared that she liked to dip chocolate cookies, preferably Milano cookies, or vanilla wafers in lemonade. She also said that she sometimes dips them in a fizzy beverage. “You’ve got to try it,” she insists. No thanks, we think we will stick with good old classic milk. Another famous star who seems to not like milk in classic food combinations is Kylie Jenner. Her post in 2018 saying she tried milk-dipped cereal for the very first time sure made a lot of people confused. Before that, the influencer only ate dry cereals and never felt the need to add milk to them. She also said that the experience was life-changing for her. To this day we still wonder how she could go most of her life without trying cereal and milk together. Gwyneth Paltrow is well-known not only for her amazing works but also for her dietary habits, which can be quite unusual. The girl must have some magic potion or something cause she appears to remain ageless. Her favorite drink might be that potion.

Paltrow described a drink that she enjoys as a special treat in her third cookbook. The ingredients include almond milk, coconut sugar, minced ginger, and toasted sesame oil all mixed up together. Paltrow admits that the drink smells like salad dressing, but she claims it is “the most perfect and warming treat for a rainy afternoon.” We know Meghan Markle through her title as the Duchess of Sussex and her amazing fashion sense. But not many of us know about her weird food choices. Apparently, Megan Markle’s favorite dish is American Cheese Pasta with zucchini and bouillon in the sauce.

Markle prepares her cheesy spaghetti and then tops it with mashed zucchini and bouillon. This food combination is bound to make the Italians angry. Can you call a bunless burger a burger? Well, Kristin Cavallari certainly does. Cavallari is known for her show Very Cavallari, but not many people know about her strict diet. Cavallari said she likes to have burgers during the week, but she doesn’t use a bun because she sticks to a low-carb diet. We can all see that the diet keeps her in fabulous shape. The actress and the narrator of NBC’s reality TV show The Biggest Loser has an obsession with blueberries. Her burning passion for the fruit makes her put them in every one of her meals, even burgers. Instead of ketchup, Sweeney pours blueberry jam on top of her turkey burger. When you’re a Top Chef host like Padma Lakshmi, peanut butter and jelly can be too boring for you. Lakshmi loves her “pomtoast,” which is the fancier version of PB and J. It’s made by spreading peanut butter on a piece of sourdough toast and topping it with pomegranate seeds. The chef shared her recipe on her Instagram and the post quickly became viral. Her fans and followers started posting about their own version of the hand-made pomtoast on their personal Instagram profiles. Yum! In 2017 when Scott Foley shared his scrambled eggs recipe, the Internet went wild. The star of Felicity posted a video on Instagram in which he scooped out a great big dollop of Skippy peanut butter and smeared it all over a plate full of scrambled eggs. Needless to say, everybody was horrified.

Foley refused to admit his bizarre food combination was anything other than awesome. To him it was delicious. “It’s so good. Don’t knock it till you try it,” said Foley. Banana and mayonnaise should never be in a food combo, but racecar driver Dale Earnhardt Jr. made it happen. His favorite food is mayonnaise and banana sandwiches. You’re truly a brave human being if you dare to try this. It takes a lot of guts to stomach this combo, both physically and mentally.