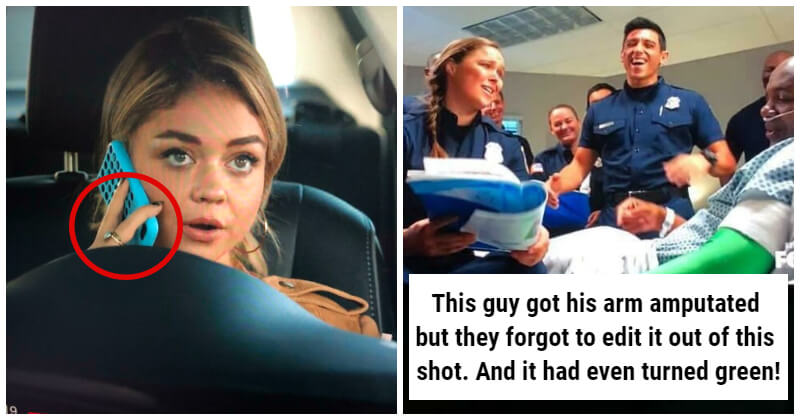 Undoubtedly, watching movies is a popular pastime in this day and age. Sitting comfortably on the couch and binging on the bucket of popcorn on a Sunday evening while immersing in a drama or action film might be the perfect time for many people.

If you are into movies and TV shows, there must be a list of favorite series you rewatch thousands of times. This leads to the inevitable moments when you notice something wrong on the screen. Though the programs and movies have been checked over through myriad eyes of directors, editors, and producers, they still may contain mistakes from time to time. That’s why the ‘Movie Mistakes’ subreddit is created. 144k eagle-eyed fans have joined this group to share funny unreasonable points they found out in their beloved movies.

Let’s scroll down and have a look at the collection of 30 interesting movie mistakes shared on Reddit! The animation released in 2016 told the story occurring in 19th-century France. At that moment, the Statue Of Liberty was being constructed in the original bronze color. However, the famous statue appeared in the film with the blue-green color you see today.

#2 In The Lion King (2019), Baby Pumbaa Looks Nothing Like A Warthog Piglet #3 In Teenage Mutant Ninja Turtles (1990), There Is A Shot Where You Can See The Actor’s Mouth Inside Of The Suit A noticeable mistake in the movie is the line “ART DEPT” at the bottom of the garbage can which is knocked over by David. In this movie, the character’s words are inconsistent with what the tombstone shows. While Forest is sure that Jenny passed away on a Saturday morning, her gravestone writes March 22, 1982, which was a Monday.

#7 About 50 Minutes Into Hereditary, All I Could See Was Toni Collette’s Wig’s Lace #8 Live Action 101 Dalmatians, Pongo Who Is About To Father 15 Puppies Is Played By A Neutered Dog The movie is set in 2002 when Serbia and Montenegro were one country, the Federal Republic Of Yugoslavia. They only became two separate countries by 2003, meaning their flags shouldn’t have appeared on the wall in the film. In addition, the flag of South Sudan, which gained independence in 2011, should have been removed. In the scene captured above, Brad Pitt is having a conversation with his father in the weightlessness, so it must be impossible for his tears to roll down his cheek. In Ep17 season 4 of this TV program, the agent Prentis stops her car next to a bar. The word “bar” should be written inverted when it is reflexed in the car’s window. #13 In Pulp Fiction You Can See The Bullet Holes On The Wall Even Before The Guy Comes Out From The Bathroom, shooting!

#14 In The Final Scene Of The Movie Pirates Of The Caribbean: The Curse Of The Black Pearl (2003) A Crew Member With A Cowboy Hat Can Be Seen On The Ship If a person takes a gun out and shoots, most of us expect the image of injured people. However, an FBI agent in “Passenger 57” has the gunshot even before the woman pulls the trigger. When Dorothy and the scarecrow are trying to get the apple, the producer forgets the girl’s ruby red slippers. She wears a pair of classic brown shoes in that scene. You could see that the towel John Hammond uses to clean the glass magically changes from white to pink after a shot. #21 The Last Of The Mohicans

“In Barry” is a movie telling the story of Barack Obama when he was at Columbia University in 1981. However, when Obama entered the Harlem Project, the post on the window wrote in Chinese that “Trump wins big in New York primary”.

#23 Live Streaming Video In Oceans 8 Has Jpeg As Extension In fact, the ship’s fourth funnel only exists to make it seem bigger, so it doesn’t emit steam as in one scene of “The Titanic”. It seems that a 2019 Model Mustang car has traveled back 3 years to meet its owner Richie, who is living in 2016, according to the movie. The symbol of Christ cross on the Spanish Galleon’s sails actually belongs to Portugal instead of Spain.

Since the September 11th attack in 2001, vehicles haven’t been allowed on ferries due to the cost of security. Therefore, it is ridiculous when cars and motorcycles appear on the Staten Island Ferry’s bottom deck in the movie.

Have you ever noticed one of the above mistakes while watching movies? If you spot any other weird scene in a film or TV show, please share with us in the comment below!

12 Hidden Film Details That Only The Most Attentive Viewers Notice