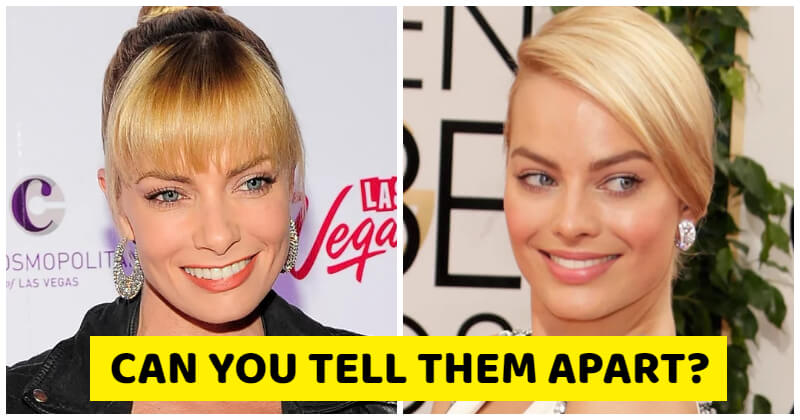 While the chance of us encountering real doppelgängers is one in a trillion, we all gotta admit that many celebrities really look similar to each other. From Daniel Radcliffe to Keira Knightley, tons of celebs have been mistaken by fans, which can lead to some pretty hilarious moments. Some stars are pretty cool with the whole look-a-like thing, while others feel annoyed when misidentified.

So read on and check out their striking similarities. It’s really shocking! Radcliffe explained the reason he often gets mistaken as the famous hobbit Elijah Wood in an interview with Marc Maron. He said that the reason people often confuse him and Wood is that they are both short guys with big blue eyes and brown hair. And also because they both played in fantasy movies that released at the same time. Amy Adams and Isla Fisher often play around with their similarities. Fisher once made a joke PSA to remind people that she’s not Adams. When the famous Lady Gaga mistook her for Amy Adams, Fisher just went with it. She even pointed at Amy, who was walking into the party, and said “There’s Isla Fisher. She’s not even nominated for anything. What’s she doing here?” On the other hand, Zooey Deschanel wasn’t so thrilled with her celebrity doppelganger comparisons. The actress told New York magazine that she kinda felt annoyed when she had to answer more questions about Katy Perry than about her own family.

By 2011, Deschanel seemed to soften her attitude about their lookalike situation. The actress even jokingly suggested on her Instagram that they should dress up as the twins from The Shining for Halloween. Brad Pitt has been mistaken for Matt Damon several times by fans. They even asked Pitt for Damon’s autograph. Instead of correcting them, the famous actor just did exactly what they asked. He was pretty chill with the whole situation too. “I’ve actually signed autographs as Matt,” Brad Pitt said. “They’ll figure it out later.” It’s not that surprising that Jaime Pressly and Margot Robbie get mistaken for each other a lot. The similarities between them are just phenomenal! If you don’t pay close attention, you can easily be confused by them. For years people have mistaken these two amazing actresses for each other. In fact, they look so identical some of their fans even suspect that they might be related, or can even be twins! A fan even mistook Kiernan for Emma on her own Instagram profile. Another awkward moment is the case of Lucy Hale and Selena Gomez. People just can’t tell her and the famous singer apart! So one day someone approached her, totally convinced that she was Selena, and tried to take Hale’s phone because they wanted to call Justin Bieber. Hale later tweeted about the whole accident on her Twitter page. Morgan knows how easily he can be mistaken for Bardem, and he made the best of those comparisons to prank Bardem a few years ago. This happened back when Javier Bardem won his Oscar and Morgan also happened to be in New York. The press got really confused. The paparazzi came at Morgan screaming Javier’s name, and Morgan flipped off the cameras. This later landed Bardem in hot water when tabloids ran the picture with Bardem’s name instead of Morgan’s. Hadid shared with Fashionista that people confuse her for the Award-winning actress pretty often. “Multiple times a day. Probably today it’s already happened like five times,” she said. Maybe because they have the same heart-shaped faces and almond-shaped eyes? Knightley shared on The Graham Norton Show that people mistake her for Portman all the time. She was even chased through airports while people were screaming Natalie’s name! Knightley felt bad for her lookalike, saying “I feel quite sorry for her because she must get chased a lot because it’s happened like five times where someone’s been like, ‘Natalie! Natalie! Natalie!’ And I’ll sign and take a picture as Natalie.” Stamos posted video proof on Instagram that fans confuse him and Rob Lowe with the hashtag #AwkwardVacationMoments and tagged the fellow actor. The video showed that Stamos was traveling when someone thought he was Lowe. Stamos played along with the funny fan encounter. Their striking blue eyes and sculpted face really make many people think Kevin Zegers is the Canadian version of Zac Efron. Zegers himself admitted this, even saying their similarity was “both complimentary and completely unsettling.” He suggested busting out the Siamese Twins screenplay. Another case of the press completely messed up. Teen Vogue once misidentified Kunis as Hyland in a red carpet gallery. Luckily, both Hyland and Kunis are pretty chill with this. They got mistaken for each other so much that they even joked that they pretended to be each other in public sometimes.

“She came up to me and said she gets called me all the time too,” Hyland said. “She said that sometimes she pretends she’s me because it makes her feel young. I asked if I could pretend to be her next time somebody asks me if I’m her, and she said OK.”