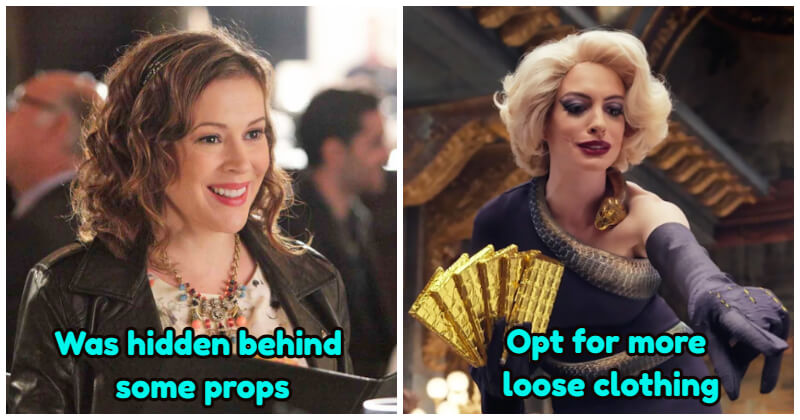 Motherhood is sacred… and unexpected. In fact, many expecting mothers are just as surprised when they discover their little bundle in the oven.

But as beautiful as it is, motherhood sometimes interrupts a mother’s work. Especially in movie and TV production, when filming can last for months and months. And months on end.

However, when an actress gets pregnant during filming, things get a bit tricky. Because actresses need to look… consistent across the entire shoot, there are creative ways filming can be altered to accommodate the growing belly.

In the past, actresses might be considered for a recast or even written out of the show if they became pregnant during filming. But with feminism on the rise, more and more productions are becoming accommodating to pregnancy.

So, which 12 actresses are expected during movie and TV shows productions? And how do they conceal the growing baby bump? Take a look at this blog to find out. While filming the 11th season of “The Big Bang Theory,” the actress who played Bernadette was pregnant. While it is challenging to insert this pregnancy into the plot, as the couple already has one kid, the writers are more than accommodating: By introducing a second baby right after the birth of the first one. Anne Hathaway was pregnant while filming the movie The Witches as the Grand High Witch. The biggest issue, from the perspective of the wardrobe, was the slim purple dress with the golden snake. Eventually, it was decided to opt for more loose clothing because something with a thin waistline was not an option. Alyssa Milano, who portrayed Savannah Davis in Mistresses, became pregnant just before the start of Season 2 filming. The series’ makers went to such lengths to conceal her pregnancy by hiding it behind bags and menus, and she was asked to hold props. Caterina Scorsone, who portrayed neurosurgeon Amelia Shepherd on Grey’s Anatomy and its spin-off Private Practice, became pregnant three times while filming. Her first and third pregnancies were incorporated into the plots of the shows. Sydney Bristow’s pregnancy was announced in Alias’ season 5, the show’s writers didn’t have to conceal the actress’s increasing baby belly any longer. They also introduced Rachael, a young special agent, to the show, and Sydney became her supervisor. A lot fewer action scenes while technically still doing action scenes, don’t you think? Gillian Anderson’s increasing baby bulge was first hidden by clever camera angles and baggy clothing. To explain Dana Scully’s absence during Gillian’s maternity leave, the writers invented her abduction by aliens. The shot of her on the extraterrestrial spacecraft even displayed the heroine’s large baby belly. Candice King’s Caroline became a pregnant vampire in Season 7; a surrogate mother for twins by magic. This storyline is because Candace became pregnant. Despite the fact that she was pregnant, the actress was forced to wear a prosthetic stomach over her own due to not looking pregnant enough. When Jenna Fischer, who portrayed Pam, was pregnant with her first kid, she and her on-set husband already had one child. When hiding her baby bump became impossible, Jenna admitted everything, and it was determined that she would incorporate her pregnancy into the series naturally — by having the couple have a second kid. Source: © Once Upon a Time / ABC Signature and co-producers

Ginnifer Goodwin, who played Snow White in the series, revealed her pregnancy during filming of the show’s third season. However, the showrunners swiftly discovered a way out Giving Snow White and Prince Charming their second child. Marcia Cross turned 44-year-old when she became pregnant with twins. The show’s writers had to come up with a strategy to hide her increasingly growing baby belly. Bree began to wear more sweaters and shoot more close-ups. In one instance, they even created a gingerbread house to conceal her stomach. Emily Deschanel and her alter-ego Temperance Brennan were pregnant in the first half of Season 7. The actress gave birth to her baby a bit earlier than her character’s due date. She had to put on an artificial tummy after childbirth to film one episode, which is super hot! Costume designers and cameramen had to do their best to make Rosamund Pike look the same in the frame and try to hide her rounded baby bump with camera angles and dark clothes. However, the actress thinks her gaining several more pounds while filming only made the character look more human.

20 Celebrities You Probably Didn’t Know Were Cheated On