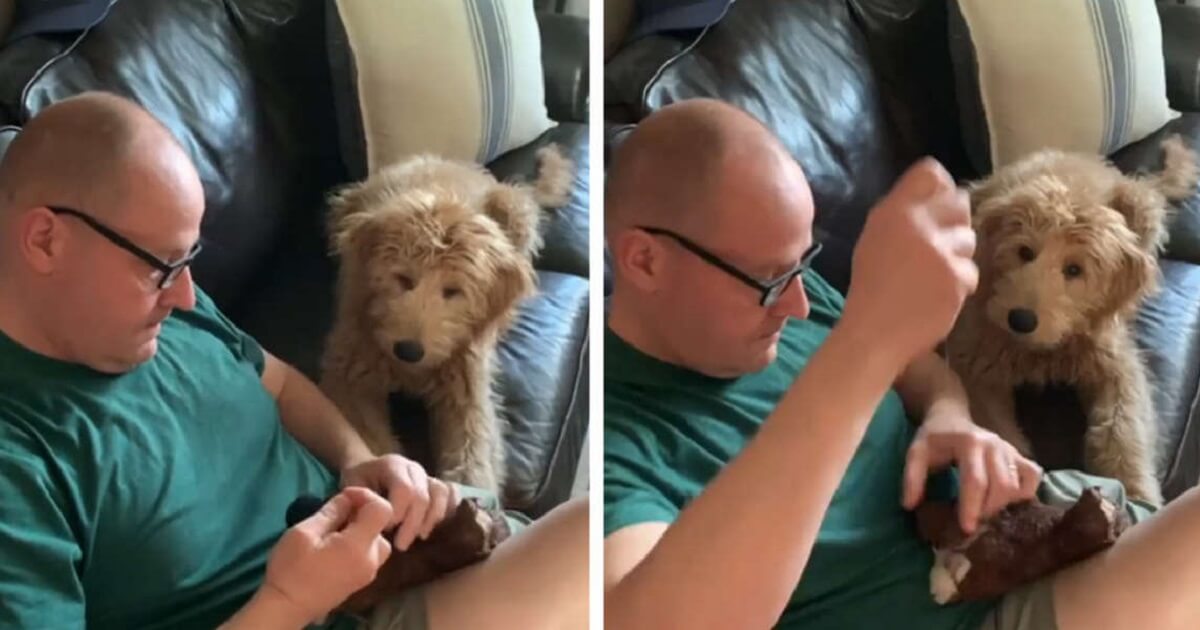 Meet Leo, a golden-doodle who loves his family and his special friend – a brown stuffed animal he takes with him everywhere. This cute canine has been winning hearts online due to his intense stare and concern as his favorite toy is repaired in an adorable video. One day, Leo was playing with his plush toy when mishap struck. Somehow, Leo managed to accidentally rip a hole into his favorite stuffed animal. And this tragedy threatened to Leo and his toy. Clearly, he was devastated.

“It is his favorite toy,” Hayley Alaxanian, Leo’s owner, told The Dodo. Thankfully, Alaxanian’s dad saw what was happening and stepped into action. “[My dad] took the toy away from him and put it away, so he couldn’t reach it, but he was crying and trying to reach for it,” Alaxanian said. “That’s when my dad decided to get his sewing kit out and started sewing it back together.” Worry-stricken Leo refused to leave his toy’s side and watched patiently as his dad stitches it back together. After several tense moments passed, the repair work was a complete success and the soft toy was returned to Leo. Leo couldn’t have been more relieved, and he was barely able to contain his excitement. He gleefully leaped into the air to catch the toy and then showed it off to Labrador brother Rowan. Finally, the pup and his plaything were happily reunited. “It is the sweetest thing ever,” Alaxanian said.

If you love the adorable dog Leo nicknamed ‘Bones’ and his brother Rowan known as ‘Beef, you can visit and follow them on Instagram to keep up with their adventures.

Puppy Instantly Regrets His House Escape Attempt, Then Rings Doorbell To Get Back Inside

Get Your Tissues Ready! Puppy Was Abandoned At Airport Along With Heartbreaking Note From His Owner

‘We All Have This Friend’: Shiba Inu Goes Viral For Constantly Ruining Group Pics