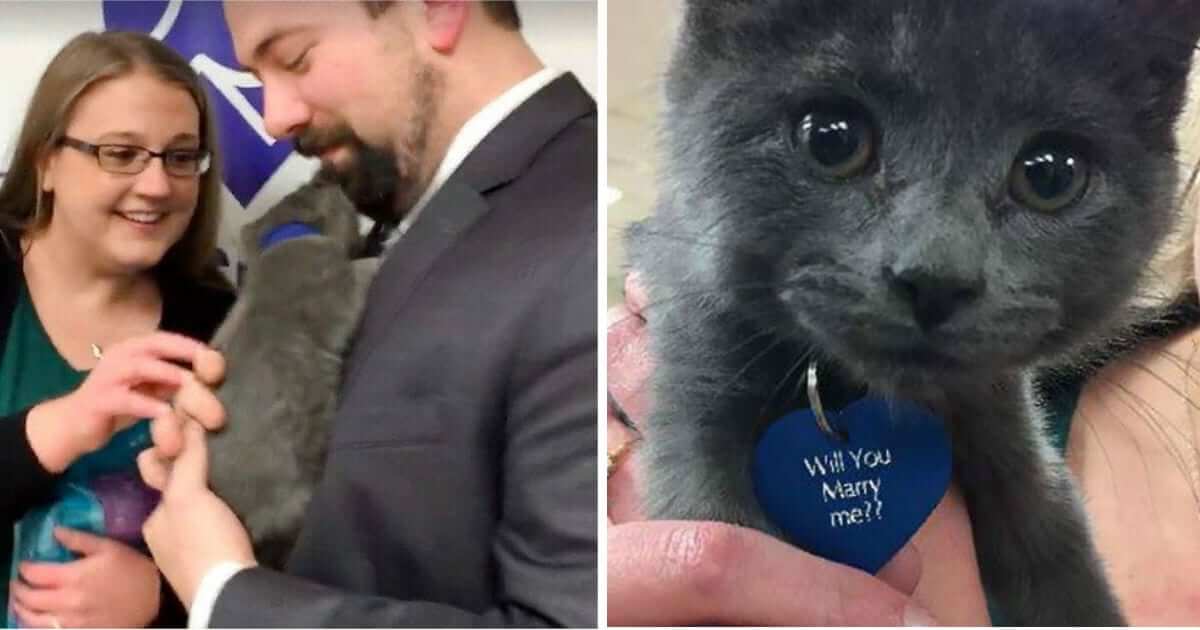 In 2014, Jerad Forsyth and Kat Woodley met on a blind date and they immediately fell in love. And after two years together, Jerad decided to propose Kat and he wanted it had to be special. Fortunately, the couple was going to adopt a kitten from their local shelter, and Jerad knew it was his perfect opportunity. Jerad went to the shelter and adopted an adorable gray kitten named Gandalf. He also called the Erie County SPCA and told them his plan, and they were happy to help. Jerad said he had to work, so Kat went to the Erie county SPCA and pick the cat up alone. What she didn’t know was that her man was planning to propose to her at SPCA and was preparing a surprise. “I was very surprised… They handed me [a cat] and asked me to read the tag. Jerad’s aunt works at the SPCA so I figured she bought us the name tag,” Kat told Metro. Kat read the tag around the kitty’s neck and she was stunned with the question “will you marry me?” The next second Jerad showed up, he wore in a suit and getting down on his knee to propose her. Kat was so happy and said ‘yes’ to Jerad and the kitten. SPCA captured the whole thing in a video and it instantly went viral.

Can't think of a better way to head into the Thanksgiving holiday! Love is in the air here at the SPCA! That's a "Will You Marry Me?" tag on tiny kitten Gandalf! After meeting on a blind date Thanksgiving 2014, Jerad knew Kat (yes, her name is Katherine!) was the only one for him…and decided to tell her so with a proposal moments ago when she came in to adopt Gandalf! Kat thought she was being filmed for an adoption video…but we knew otherwise! Congratulations to the happy couple – lots to be thankful for!!!

Now the animal loving couple Jerad and Kat are enjoying their married life as a family of four, with a pup named Shamus and the rescue kitten. Congrats to the happy couple! Woman Paid A Stranger’s $600 Vet Bill, Got Criticized By BF For Her Random Act Of Kindness