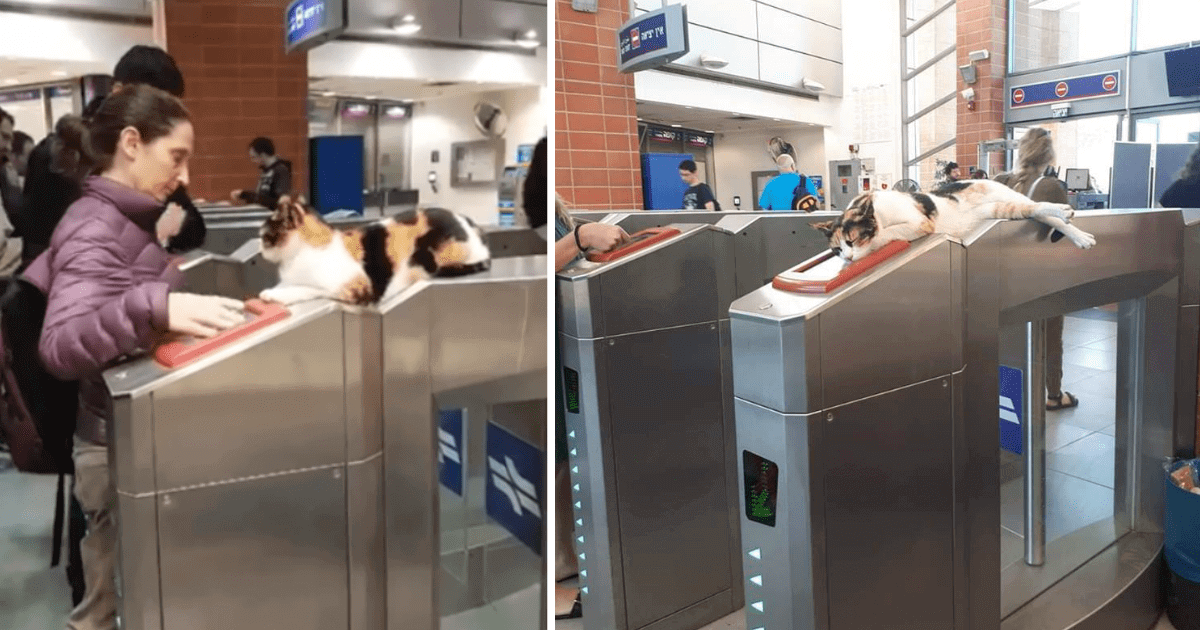 If you go to Petah Tikva Train Station in Israel, you will be greeted by a local cat known as Shawarma. She is a stray cat who spends most of her time at the train station greeting commuters as they come to the turnstiles and swipe their tickets. All the passengers know about Shawarma and nobody looks surprised to see the cat there because she has been a fixture in the train station for months and everyone is used to her presence. One local, Dan Kashani, decided to film what regularly happens at the station every day and share it with the internet.

“I was coming back from work,” Kashani told The Dodo. “As soon as I got to the gate I saw the cat lying on the gate and it was very cute — it made me smile.” Shawarma loves nothing more than to relax and lie on the turnstiles. When commuters stop by to swipe their tickets, they are greeted by her smiling face. A few of them say hello to Shawarma, but most simply go through the turnstile without stopping to pet her or give her a cuddle.

The two-minute video of Shawarma sitting on the turnstile that Dan posted quickly went viral and received over seven million views. There were tons of Facebook comments about the fact that so few people stopped to give Shawarma lots of love. People couldn’t understand how the passengers could resist petting the adorable cat. Dan explained that Shawarma is famously unpredictable, so most people don’t pet her. And that’s the dilemma facing the daily commuters at a train station in Israel every day.

“You can pet her if you offer your hand and wait and see if she’s into it,” Kashani said. “But sometimes she’s not into it, and she’ll let people know with a slight scratch or bite. She has to be into it.” Everyone loves the adorable cat Shawarma and finally she has found a great place to live and work. Now that Shawarma has taken the Internet by storm, we’re sure more people will start visiting her at the train station.

In the meantime, take a moment to watch this adorable video and don’t forget to share it with your friends and family!