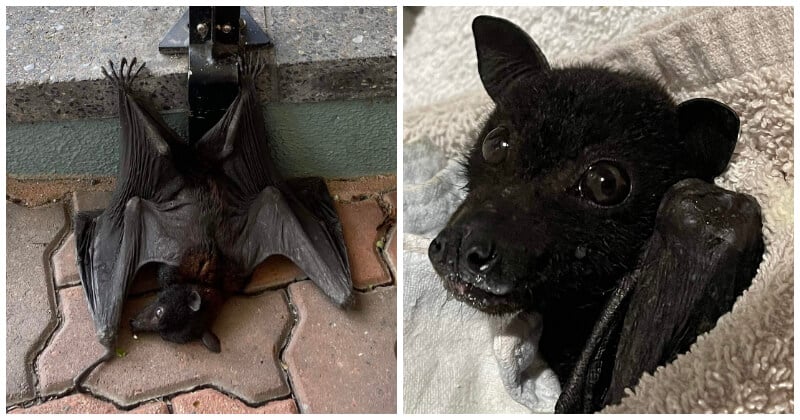 Habitat loss caused by human activities pushes many wild animals to the verge of extinction. Some vulnerable species are sent to sanctuaries and safaris to be protected from potential dangers. Other species have to struggle in the concrete jungles and may lose their life due to the shortage of food.

Recently, a feeble bat was found hanging on the edge of the sidewalk in the streets of Brisbane, Australia. People who spotted him didn’t know what they should do, so they contacted Bat Conservation & Rescue. “We were worried he would crawl off somewhere and be hard to locate or in danger,” the rescuer Rebecca Appleton said. “But [when I arrived] he was still doing his best to hang.”

When Appleton arrived at the place, she saw the poor animal trying his best to cling to the sidewalk. Her heart was broken due to the bat’s miserable appearance: “He looked so sad and I couldn’t wait to get him warm and safe.”

The animal was so weak that he didn’t react when Appleton grabbed him: “He let me grab him very easily, as he was very weak.” The little bat was named Donnie Darko, and the staff took him to the rescue center to care for him. It turned out that the young guy was struggling with a food shortage resulting when the temperature got lower and more rains poured down. Luckily, thanks to the rescuers’ care, Donnie recovered quickly. He was even jealous of other bats because he didn’t get a medication syringe. The caregiver had to give him pretend syringe to prevent him from stealing it from others.

“Donnie was a total sweetheart,” Appleton shared. “The other bats had to have medication each day in a syringe mixed with food, and once he realized they were being hand fed, I had to make him up a pretend medication syringe to stop him trying to steal from the others.” The guy seemed to depend less on the rescuers, which meant he could return to the wild soon. Everyone hoped he could manage to have a pleasant life when he left the center.

“Please keep a look out for bats hanging alone during the day as these bats need help,” the conservation stressed. “And please plant locally native species in your garden to help ease these food shortages and provide food and habitat for local wildlife.” How do you feel when you see little Donnie? Have you ever given a wild animal a helping hand? What can people do to help wildlife? Please let us know your views in the comment below, and don’t forget to share this heartwarming story with your fellow animal lovers!

Wally The Bunny With “Wing-Like Ears” Is Famous On Instagram, And He’ll Win Your Heart

8 Cat Puns That Will Make Your Day

5 Facts About Saola Animal – Why Is the Saola Endangered?