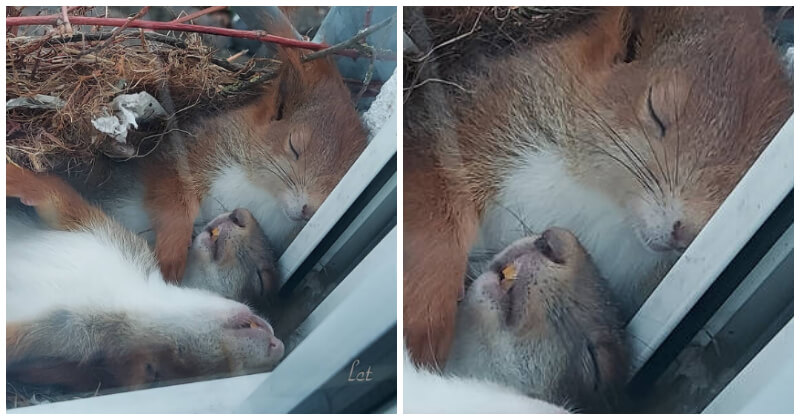 More and more wild animals are suffering from habitat loss caused by the expansion of human activities. As a result, some species have to manage to find a new home. This explains many unusual stories in which people are shocked after suddenly realizing there are more than their family members living in their houses.

Ludwig C. Timm was such a lucky man when he found out there was a squirrel family residing on his house’s windowsill. It was when he looked through the window in his bathroom that he spotted something strange.

“At first, we only noticed a few small twigs that were lying on the windowsill. We thought the wind had blown it there,” Timm remembered. “Then we saw the squirrels building.” A squirrel had chosen a spot on the window to build a nest and start his little family. Timm couldn’t believe that he could be so lucky to have an opportunity to observe the squirrels so closely. He was a photographer, so he decided to make the best use of this golden chance. He caught warm-hearting daily moments of the animals and posted the best photos on social media. One of the cutest pics was taken when all three furry family members were taking a nap. The image’s vibe was so sweet that it melted everyone’s heart.

“It was very lucky for me to be able to take the picture of the sleeping squirrels,” Timm said. “Normally they’re inside the nest, but it was hot that day, so they slept where I could see them.” It is obviously fantastic to have a chance to witness this adorable creature growing up. “It’s a very nice coincidence [that they chose that spot],” Tim added. “We got to see the squirrels grow up.”

Let’s share this lovely story with your friends and your family, and don’t forget to comment your thoughts down below!

20 Unique Animals Who Surprised Us With Their Stunning Looks

Meet Darius, The Talented Rat Who Was Taught To Paint With His Feet

Mom Asks Daughter To Stop Talking To Her As She Almost Makes Little Sis Lose Her Cat, Resulting In Her Having To Move Out Of Their House