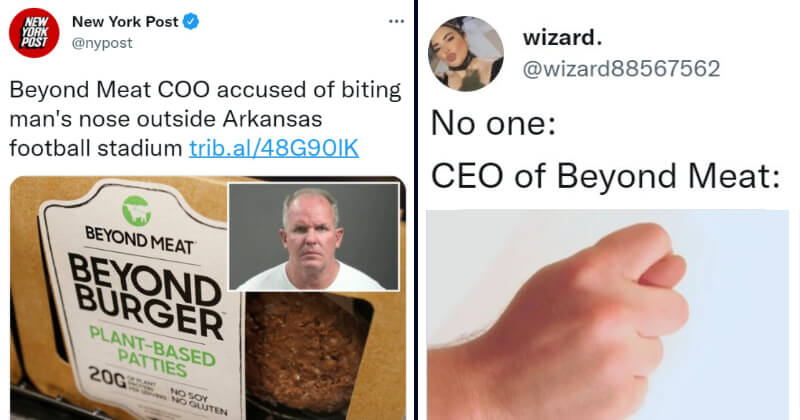 Nowadays, people are increasingly looking for healthy diets, and a plant-based diet is one of them. Due to this popular demand, a company called Beyond Meat has created a product known as imitation meat—an ideal alternative to meat products. This meat substitution is widely known and trusted by consumers, all thanks to its real meat-like taste and texture. However, while their product is excellent, we cannot say the same about their employees, and the story below will explain it to you!

While leaving the Arkansas Razorbacks stadium, Doug Ramsey, an executive of Beyond Meat, got into a fight with a Subaru driver. The incident ended with Ramsey biting the man’s nose, tearing off some of the skin. As a result, the executive was arrested. How ironic is this? An employee of a meat substitute company was arrested for biting a… human? When Twitter users learned about the event, they immediately reacted, even turning the executive into a hilarious meme. Below, we have gathered some of the best memes and jokes. Let’s scroll down and check them out! 2. Gotta do what ya can when inflation is this high! 3. “Because nobody’s nose is better than us!” 6. “What’s the appropriate wine to go with a nose? Asking for a friend” 7. Also, a time traveler is being discovered LOL 9. It was the COO, but this is still funny LOL 10 Weird African Foods Only The Brave Can Eat – Do You Dare To Try?

Is This Redditor Acted Like A Jerk For Refusing To Babysit Her Sister’s Kids? Here’s What People Said

Students At Kyoto University Turned Their Graduation Ceremony Into A Costume Contest, Here Are 20 Of The Best Outfits

15 Posts That Will Restore Your Faith In Humanity

17 Pics Of Objects That Decided To Reveal Their Real Faces

This Teen Moves Into A Retirement Community By Accident, And She Loves It

20 Times People Misunderstood Each Other And It Was Funny Result

Karen Confuses The Restaurant Owner With A Waiter, Treats Him Terribly, And Ends The Night With An Unexpected $4k Bill

People Who Are True Definitions Of Patience

30+ Stupid Gendered Marketing Tactics That Will Make Your Eyes Roll

Are You Smart? These 14 Confusing Photos Will Definitely Make You Doubt Your Brain

When You Think Things Are Bad, Some People Are Much More Unlucky Than You

Cringiest People Who Need To Be Banned From The Internet