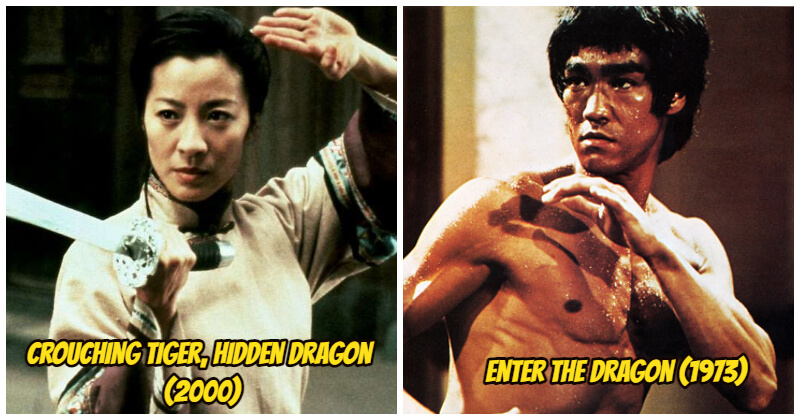 Moviegoers, especially fans of the action genre, can’t get enough of fight scenes, which give us heated vibes. Given that, directors and actors tend to work at full throttle to make amazing combat scenes that float the viewer’s boat, which requires creativity, patience, and even scarification of stars who involve in the scene.

So far, the number of great fight scenes from action movies has been countless. Most of them are marvelous and meticulous, leaving a huge impact on audiences. James Bond’s fight scenes are a great example that rocked the world of cinema, and also amped up the emotion of viewers.

Along with James Bond, we’ve compiled 15 top-notch fight scenes in movie history. From Captain America: The Winter Soldier (2014) with the elevator fight scene to the hallway fight part of Oldboy (2003), that’s really worth a shot. Keep scrolling down and check them out! “The Matrix” was first released in 1999 and rocked the cinema world. With its splendid scenes, it has always been considered one of the best sci-fi action movies. But the star of the movie is the fight scene between Neo and Agent Smith.

Neo is able to embrace the impossibilities of this universe for an exciting battle when he encounters the invincible Agent Smith. It incorporates wirework into contemporary action films and mixes the grounded and stylized choreography of kung-fu flicks. “Captain America: The Winter Soldier” was obviously the best MCU film at the time it was released. The great combinations of marvelous editing, special effect, and stunts make the film a solid choice for picky moviegoers. The movie features arrays of eye-catching scenes, yet its scene of the close-quarters brawl between Captain America and a gang of mercenaries is a sheer cherry on top.

This scene is so catching that Cap finds himself surrounded by opponents who he mistakenly believed to be his pals. But he doesn’t back down from the challenge, and in the crowded, disorderly brawl, he kills them all. Speaking of “From Russia With Love” (1963), the scene of fighting between Bond and Red Grant, a SPECTRE assassin is considered one of the most shockingly brutal fights in the entire franchise. In that scene, Red Grant confronts Sean Connery’s 007 on the Orient Express. He first holds Bond at gunpoint, but Bond disarms him with one of Q’s gadgets.

Thanks to Terence Young’s mastery of tension and Sean Connery’s believable depiction of a Bond who is fearful for his life despite his suit of narrative armor, this brutally violent episode still has the power to astound spectators more than fifty years later. The heated fighting between Lee and Han made Enter The Dragon at forefront of the action movie, along with Bruce Lee acting. After defeating Han’s army of thugs on his own in the climactic scene of “Enter the Dragon”, Lee meets Han in his personal museum. The two get into a tremendous showdown towards the end. Han runs away to a room filled with mirrors, and until Lee breaks them all, he is unable to determine which Han is the real one. He then kills him. Park Chan-wook’s vengeance thriller, Oldboy, features a combat scene that is breathtaking. Every time they witness the ultraviolent opera Oh Dae-su, who was wrongfully imprisoned, takes on a corridor full of goons, fans are in awe. You can never stop being sensitive to it.

With the exception of when Oh Dae-su is stabbed, the crew nailed this scene in 17 takes over the course of three days (Choi Min-sik was committed to the role, but not enough to take an actual knife in his back). Raiders of the Lost Ark fans can’t get enough of the scene where Indy fights the mechanic down on the airfield. Indy notices the revolving propellers of the plane coming up behind him and cowers when the technician cockily prepares to deliver the final fatal blow. The mechanic, who is caught between the propellers and sprayed all over the plane’s wing, realizes too late that it is too late. The fighting in the alleyway in John Carpenter’s They Live is masterfully produced and frequently cited as one of the greatest fight sequences ever captured on camera. Roddy Piper and Keith David were adamant not to turn over control to a stunt unit for the fight scene involving John Nada and Frank Armitage over a set of sunglasses that allow users to view the Earth for the brainwashed, alien-infested nightmare it truly is.

Carpenter was so impressed that he decided to leave the full battle in the picture, which runs for five and a half minutes, uncut. The fight was only scheduled to continue for 20 seconds, but Piper and David opted to fight for real on the day. Jackie Chan excels at portraying exciting on-screen fights possibly more than any other actor. He is an outstanding physical comedian as well as a master martial artist, and he combined these skills to create his own subgenre of action comedies.

One of the better examples of this is The Legend of the Drunken Master, as evidenced by the comical market brawl. Chan takes on a band of bad guys while getting more inebriated, making him both a tough and a buffoon. The battle in the bathhouse in Eastern Promises is a shocking act of violence. Semyon leads Nikolai to a bathhouse in the hopes that the Chechens will mistake him for Kirill and kill him because they are unaware of Kirill’s appearance.

Nikolai, however, fights back as the Chechens attack him with linoleum knives. Despite being repeatedly stabbed and narrowly escaping death, he kills both of them, foiling Semyon’s schemes. Films by Quentin Tarantino are well known for their extreme brutality. With Once Upon a Time in Hollywood, which features very little violence throughout, he broke the mold. Then, in the breathtaking climax, Tarantino delivers a single horrific blow that equals the savagery in the entire film. In the same way that Tarantino eliminated Hitler in Inglourious Basterds, he changed history in Once Upon a Time in Hollywood.

The Manson murderers go to Rick Dalton’s house next door instead of killing Sharon Tate and her pals because Cliff Booth and his pitbull Brandy serve some quick vigilante justice to the tune of Vanilla Fudge’s “You Keep Me Hangin’ On.” “Kill Bill” is another hit by Quentin Tarantino that has indelible fighting scenes. Tarantino mixed a variety of genres—from spaghetti westerns to exploitation films—into one chaotic journey for this action film. This is also the first film embrace classic kung-fu films, resulting in the beautiful climactic showdown.

The Bride, armed only with a sword, slices stunningly bloodily her way through the Crazy 88 gang. Although it is undoubtedly over the top, Tarantino’s action direction and the stunt performers are incredibly talented. “Crouching Tiger, Hidden Dragon” is famous throughout the world for its martial arts sequences and for the characters’ acrobatic, balletic fighting techniques.

The film’s high point is the confrontation between Yu Shu Lien, played by Michelle Yeoh, and Jen Yu, played by Zhang Ziyi. Lien constantly changes up his arsenal in an effort to match Yu’s Green Destiny sword’s accuracy. The two exchanged physical and verbal punches throughout the altercation. Rocky Balboa and Apollo Creed made history with their extremely intense fight scene in Rocky II. In particular, the final fight of them defies genre conventions and establishes the film as a love story above all, when Creed defeats Rocky and doesn’t care since Adrian is by his side no matter what.

After a few rounds, both Rocky and Apollo are worn out. Rocky only succeeds because he is (barely) still standing when Apollo collapses from weariness. His knockout triumph is the result of his unwavering resolve and tenacity. The Mission: Impossible series made its fame for death-defying stunts, courtesy of Tom Cruise. It, therefore, comes as a surprise when Mission: Impossible – Fallout provides one of the best scenes, which features a vicious and gory hand-to-hand battle in a public restroom.

The suspect surprised Ethan Hunt and Walker by having far more fight in him than they had anticipated when they cornered him in a lavatory. It is a theatrical and magnificent moment, with Henry Cavill cocking his hands and a pipe being pulled straight out of the wall. In Hard Times, Walter Hill’s first feature film as a director, Charles Bronson delivered one of his signature performances. He portrays Chaney, a bare-knuckle boxer with an invincible fighting style who is taken under the wing of a hustler by the name of Speed.

In the pivotal smackdown, Chaney finally faces an opponent who actually has a shot against him after winning matches left and right in New Orleans without incident. Street presents a distinctive challenge to Chaney’s brute force as a slick, agile fighter.