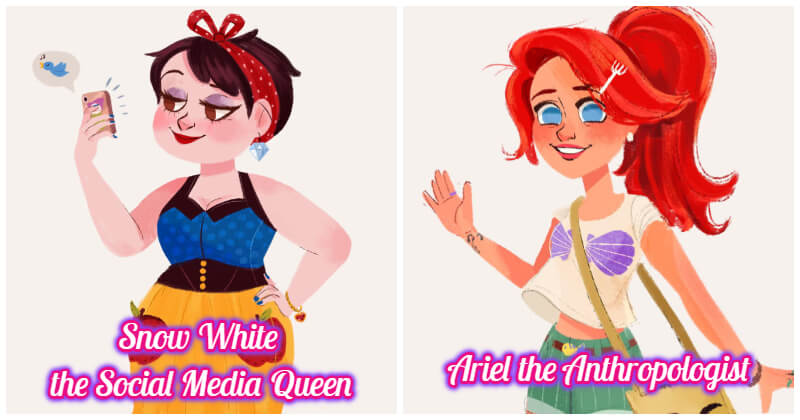 All Disney movies, which depict the lives of princesses, were produced in the 1900s while “Snow White and the Seven Dwarfs” is the world’s first full-length animated feature and the first Disney animated featured film. So, princesses’ wardrobes are full of classic dresses, from simple long nightgowns to stunning dresses. Our beautiful princesses melted not only their princes but Disney fans when stepping out in them. But, have you ever wondered how they would look in our modern-day world?

A children’s book illustrator and character designer for animation from Canada, Anoosha Syed, created a series of digital illustrations of what she imagined these girls would be like as 21st-century young adults. The artist tried to be accurate in their personalities.

Keep scrolling down to enjoy her pictures. Ariel is an expert on marine animals, so it’s no wonder why she becomes a marine biologist. However it wasn’t her dream, she follows in her father’s footsteps. The girl loves studying humans and different cultures. Merida is good at riding horses and has an archery scholarship. Look at her outfit, we can guess she has a passion for punk rock. Merida is certainly a brave and strong girl. Unlike Merida, Snow White is interested in fashion so she becomes a fashion blogger with vintage fashion and old movies. She nearly sticks with her iPhone and always takes selfies. Because of her humble nature, she quickly gains a large number of followers. Pocahontas loves languages so she works as a translator while studying Linguistics at university. She is also an adrenaline junkie and sometimes hikes mountains and kayaks through rivers. Esmeralda overcame many obstacles to become a professional ballet dancer. She often volunteers at refugee camps and is a part of the social justice community. This girl loves Paris but her favorite place in the whole city is definitely the beautiful Notre Dame. Mulan wanted to follow in her dad’s footsteps, so she decided to join the military school. To enter the school, she disguised herself as a man. Although her secret was revealed, she proved herself to be an excellent cadet. Her actions encourage the school to open its door to female students. Tiana becomes one of the youngest restaurant owners in the world. Her restaurants are well-known for fantastic family recipes, beignets, and weekly jazz shows. Belle is addicted to TV shows and movies. She even stays up at 3 am or 4 am to reading fanfics or binge watching Game of Thrones. Jasmine loves exploring the world and immersing herself in different cultures, so she becomes a travel blogger. She always looks out the plane window while soaring through an endless diamond sky. Jane Porter graduated with a scientific illustration degree. Her father wanted her to support him in his research of African gorillas.