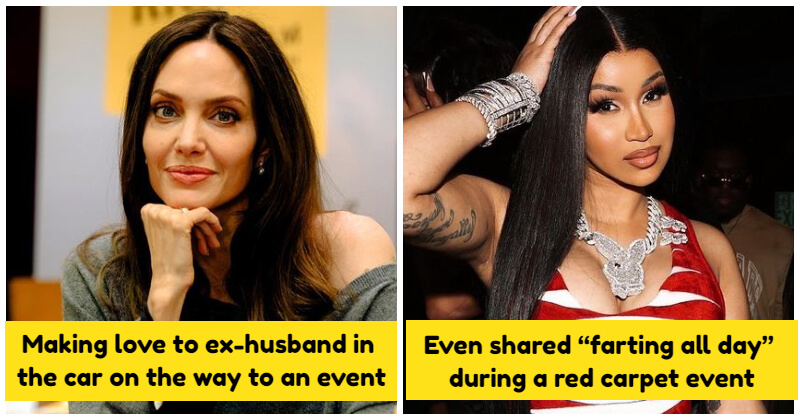 First things first, we have to make it clear that calling a celebrity a chronic overshare might sound like we’re throwing shade at them. Still, we are interested in celebrity gossip and drama, and feuds and rumors, so we love the oversharer. More interestingly, the sources of gossip and drama come from our celebrities!

Sometimes, the oversharers might regret being so frank. And yes, sometimes a little bit of poop talk will go a long way. Below, we’ve compiled 14 living celebs (and one who has sadly passed away) who are our lead finalists for best celebrity in the habitual oversharing competition. Let’s scroll down and check them out! Miley Cyrus never minds letting it all hang out. She can show us how comfortable she is in her skin and many half-naked photos as well as she’s been candid about her sexuality, her experiences with drugs, and drinking. Her former husband describes the singer as an open – and sometimes a bit troubled – book. Gwyneth Paltrow might not be the first name that comes to mind when we think of oversharing celebs, but please remember that this is a woman who sells a candle that she claims smells like her vagina and who has a lucrative hustle going of selling vibrators and jade eggs meant to go in the said vagina. She’s an oversharer who is making a lot of money from it. It’s no doubt that Chrissy Teigen was one of the oversharing queens before she quit Twitter. She was known for nearly naked photos and stories about her plastic surgery decisions or even private stories between husband and wife. Nobody enjoys ending up on a Real Housewives franchise by being private, demure, or timid. But it was a really huge overshare for Denise Richards to claim that she was “on the hunt” to find someone to give her husband a massage that finished with a “happy ending” (PSA: that is an NSFW Google). OMG, that was a lot. To be fair to Angelina Jolie, she’s not nearly the overshare that we know. Back in the Billy Bob Thornton days, she shared too much about their sex life. In one red carpet interview when the former duo revealed that they’d made love in the car on their way to the MTV Movie Awards. People should remember Whitney Houston as one of the best singers of all time. And we also remember her amazing pipes, but we can’t forget the awkward moment on the show Being Bobby Brown in 2005 when Bobby recounted that he’s manually helped Whitney relieve some constipation by removing poop from her body with his hands. Oh, God. We don’t need to know that, even if it was an act of love as she described. Kelly Clarkson always gives that best friend vibe. We can imagine Clarkson as another one of our friends sitting on the porch, sipping wine, and swapping stories. One story she could swap – as she shared it on her talk show – was about being hit with a sudden poop situation and having to go in a trash can, leaving it “destroyed.” Cardi B has a larger-than-life personality and style, and one of the things that fans appreciate about her is that she always keeps it real – even when it’s really about farts. For example, she shared that she “farts all day” from stress during a red carpet moment in 2018. Related but an over-share, so welcome to this list, Cardi! Perhaps we’re a bit old-fashioned, but we remember when smoking weed was a lot more illegal and a lot more taboo (at least in some places), so most celebs kept pretty quiet about their pot usage. Not Seth Rogen, who has proudly “shown off” that he smokes “all day, every day,” and has for 25 years. Another celeb who seems to have no control over his impulse to say whatever’s on his mind is Kanye West.  He tends to speak out about everything, from his sex life and his offensive views on slavery to his frustration with his soon-to-be ex-wife, his documented struggles with mental health, or his genius creative side. This one is a potentially controversial addition to the list. While Taylor Swift never gets graphic about sex or bodily fluids, some people feel that she overshares her relationships through her music. Others think she’s just mining her real life in the service of great art. We’ll let the imaginary jury decide if she overstates, but we’ll state that the 10-minute version of All Too Well is the BOMB and we love every gossipy detail about it. Oh, Adele. We love you and we love that you are a kind mother. But maybe we could’ve lived if we didn’t know that you pick your kid’s nose, then roll up the boogers and glide across the room. She shared this anecdote in 2016, prompting fans to wonder why one of the most successful singers of all time apparently doesn’t have access to a box of tissues. Jada Pinkett Smith is the host of her own talk show and is not afraid to get messy with discussions about sex, love, and marriage. She’s been shockingly open about the challenges in her marriage to Will Smith, including infidelity on both sides and the role that sex does and doesn’t play in a long-term relationship. Jessica Simpson’s penchant for oversharing has made her a fan favorite on her MTV reality show Newlyweds, and it’s made her memoir, Open Book, one of her own. best celebrity biographies of all time (no, we’re not even joking). It does, however, also lead to moments like her sharing during an interview that she doesn’t brush her teeth every day because she doesn’t want them to feel too slippery. Yikes!