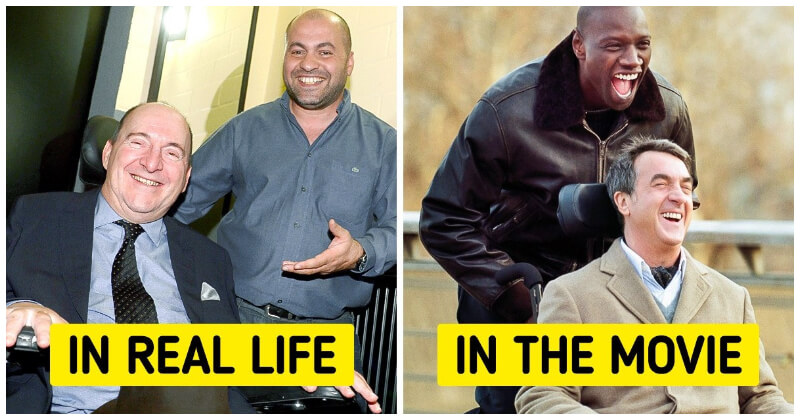 There’s something powerful about watching a movie based on a true story. Movies relied on true stories to demonstrate that reality may be more mind-boggling, fortuitous, motivating, or frustrating than anything you can think. After all, the only thing that makes a crazy plot or character even more unbelievable is knowing you could actually meet them in real life. In other words, it would be kinda cool to cross paths with the real-life version of Philippe Pozzo di Borgo and Abdel Yasmin Sellou’s characters from “The Intouchables”, right?

Today we’re going to take a look at the movie that took the box office by storm as critics hailed it as a comedy masterpiece – “The Intouchables”. The movie is based on the true story of a wealthy paraplegic (Count Philippe Pozzo di Borgo) who develops an unlikely friendship with a guy from the street (Abdel Yasmin Sellou) whom he hires to be his aide.

Philippe Pozzo di Borgo is a Corsican-French businessman who serves as the director of Pommery and formerly owned a historic hotel Particulier in Paris that is now used as a function hall. He is the second son of the French duke Pozzo di Borgo and the Marquis de Vogue. The noble family had its roots in the 1500s. He started working in the champagne sector as soon as he finished his education. Before his job as director of Pommery, Philippe was a manager at Moët and Chandon.

Philippe di Borgo became a diabetic quadriplegic in 1993 after a paragliding accident. Because of his disability, he attempted to commit suicide by wrapping an oxygen tube around his neck. For him, the sadness “was unbearable because I was always in control, and suddenly I was dependent on everyone, especially a wife who was ill.”

The background of Abdel Yasmin Sellou showed that he was not an employee of the month.

In stark contrast to Philippe, Abdel’s background was not good. He grew up in a low-income family of eight siblings, where he acquired an impulsive disposition and a very nasty temper. He was forced to move to Paris at the age of 10 to live with relatives who could look after him, and at the age of 16, he was expelled from school for stealing from his peers. Far from correcting himself, he was arrested for the first time at the age of 18 for stealing tourists’ cameras. Abdel’s future was dismal because of his young and dubious activities. But if there was anything about him that set him apart from other people, it was his charisma, which drew people to him and endeared others from the very first moment they met him.

While serving a one-and-a-half year prison sentence, he had a chance to be released in 10 months provided he reintegrated into society by taking mechanics courses. However, he chose to find a new job —any job—as long as it prevented him from returning to jail,  instead of taking the course. He ultimately applied for a position as a tetraplegic millionaire aristocrat and his sick wife’s carer. He had no idea how the work would change his life.

Hiring him seemed like a terrible decision, but it produced the best results.

So what made Philippe, a rich, successful, and sophisticated man, hire someone like Abdel? Philippe actually chose Abdel because he liked his straightforwardness and irreverent sense of humor. Philippe didn’t want any pity; he just wanted to be treated the same as everyone else. Despite being aware of Abdel’s history, Philippe recruited him and they hit it off right away.

As Phillipe said, “I needed to be back on track. Pity is the last thing you need. The pity is hopeless. Pity is what someone gives you because he is afraid to take care of you.” He also felt that Abdel was the perfect person for him and said, “I don’t care that he is out of jail. I needed him. And he became a friend afterward.”

Unexpectedly, their huge difference was the bridge that brought them together when they discovered that they both needed healing.

It’s hard to believe but it’s true. In stark contrast to the etiquette Philippe was accustomed to, Abdel offered comedy, spontaneity, and humility. However, because of that, Philippe gradually recovered from his depression. “He treated me as I needed to be treated,” the count told. With his unorthodox care, Abdel was able to drive outside the speed limit with Philippe as his co-driver, go jogging with Philippe, and grasp onto his wheelchair to create exciting situations. Philippe was once again able to enjoy life and break up his monotonous routine thanks to these incredibly bizarre circumstances.

A friendship that saved them and touched many hearts.

This incredible story will teach you to believe in true friendship. They are an excellent example to demonstrate how even completely different people can find each other and be forever connected by friendly relations. As Abdel shared about what it was like before they became friends: “We were 2 desperate people looking for a way out; the rich man mad with grief over the death of his wife and the young gangster just out of jail who wanted to blow it all up. 2 outcasts supporting each other.” After ten years of mutual friendship and learning, their paths eventually separated in 2003 while traveling to Morocco, where they both found partners.

Philippe moved to his wife’s country of origin to start a family after marrying a Muslim woman. Around the same time, Abdel also got married. He now owns a poultry farm in Algeria and has three kids who refer to him as their uncle.“Before, he wouldn’t have even asked me about settling down,” Abdel said. “I was simply interested in women if they were fast food. Now I’m settled, focused on my new life.” Both men authored novels from their respective points of view following that friendship that changed their lives. Philippe authored Untouchable, which served as the basis for the French film based on their love, while Abdel wrote You Have Changed My Life.

Nowadays, Philippe, Abdel’s friend, calls him to hear about his experiences and strange incidents when they aren’t in direct contact. Philippe is the one who travels to Morocco occasionally to visit Abdel. Both instances demonstrate that even the most wealthy or humble individual can survive extreme adversity. But just as issues don’t differentiate between social classes, neither do affection nor friendship. And even when we feel as though we are falling, there is always a helping hand that can encourage us to push ourselves beyond our comfort zones.