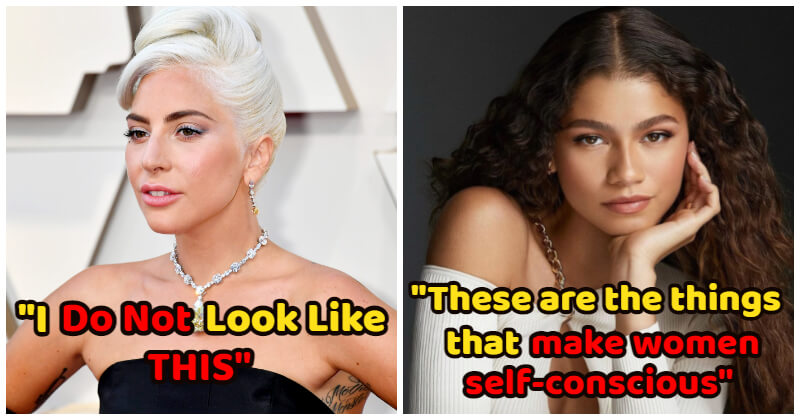 Photoshopped pictures have long become the norm in the entertainment industry. We see picture-perfect models and influencers everywhere these days. They were featured on the cover of the latest magazines, on television shows/movies, and everywhere on social media pages. These unrealistic images have raised beauty standards to an unattainable level.

Lucky for us, more and more celebs are taking a stand against the heavy-edit photo trend. From Zendaya to Cindy Crawford, famous women everywhere are standing up for body positivity by saying no to digitally altered photos. Let’s check out who these amazing stars are and what they have done to make every girl feel beautiful. During her time modeling for H&M’s beachwear collection, Beyoncé caught wind that the fashion brand had edited her silhouette to make her look slimmer. The queen bee was unimpressed. Beyoncé insisted to use the original photos, and her team refused to approve the edited shots. In the end, H&M gave in. A spokesperson for the brand later confirmed that they were only discussing the idea of editing Beyoncé’s photos but never got to turn their thoughts into action. Popular rising-star Zendaya is known for her down-to-earth personality, so it was a total shock for her to see her images were photoshopped by Modeliste magazine. They edited the pictures so that her thighs and hips looked smaller. The actress called the magazine out on her Instagram in 2015, by posting a before-and-after picture of her photoshopped body. She wrote, “Had a new shoot come out today and was shocked when I found my 19-year-old hips and torso quite manipulated. […] So I took it upon myself to release the real pic (right side) and I love it”

The former Disney Channel star also exposed the dangers of over-edited photos: “These are the things that make women self-conscious, that create the unrealistic ideals of beauty that we have. Anyone who knows who I am knows I stand for honest and pure self-love.” In 2013, Lady Gaga was featured on the cover of Glamour but she didn’t appreciate the heavily photoshopped picture. She said that this wasn’t her, saying “I felt my skin looked too perfect. I felt my hair looked too soft. I do not look like this when I wake up in the morning.” The famous singer also urged readers to fight back against the forces that make them feel like they’re not beautiful on the stage of Glamour’s “Women of the Year” Awards. “What I want to see is the change on your covers…When the covers change, that’s when culture changes,” Gaga explained. Cindy Crawford once said: “I wish I looked like Cindy Crawford.” Now we know that even world-famous supermodels can have insecurities about how they look. In her 2015 book Becoming, Crawford wrote: “Sometimes, I forget that the images I am used to seeing of myself aren’t real, that they are all part of the illusion of being Cindy Crawford. And then, I will catch a glimpse of the real, un-retouched Cindy or see an unflattering paparazzi shot, and it’s a shocker.”

She also shared that the fashion industry’s expectations feel overwhelming, especially for a female model. Crawford then said the most meaningful way to cope with inevitable changes of aging “is to live in the present moment, continue to evolve, and to feel enormous gratitude for all that I do have: a happy marriage, a relationship with my kids that fills me with pride, and work that continues to inspire me.” In 2014, Lorde praised the aesthetic of a shoot she did with Fashion magazine but was quick to point out where they went wrong, tweeting: “apart from the fact that I’m pretty sure this magazine gave me a new nose, I really like this photo”.

Lorde also disliked the edited photos of herself that removed all her acne. The singer encouraged her fans to embrace any blemishes or imperfections they may have, saying: “Remember flaws are ok.” Empire magazine surely didn’t afraid to mess with the Scarlet Witch. In May 2018, the magazine featured a photo of Elizabeth Olsen on its cover, the only problem was it looked nothing like her. The picture was heavily edited so she could have uber-sharp cheekbones, a slimmed-down nose, and pursed lips. Needless to say, Olsen wasn’t happy about this. She claimed her face on Empire magazine’s May 2018 cover looked nothing like her. The Marvel actress showed her displeasure through her now-deleted Instagram post, asking “does this look like me?” Nicki Minaj called out ESPN magazine for editing her face beyond recognition on its cover in 2014. The rapper shamed the magazine for over-editing her face, namely her forehead, to the point that it looked nothing like what she looked like in real life. “When retouching goes wrong,” she wrote. She also posted about the shoot again on Instagram, saying: “I love my personal unretouched photos where my forehead doesn’t mysteriously grow in length.” If the other stars were having trouble with their photos being over-edited by magazines, then Jessie J was having the same problem but with her fans. The singer called out her followers who dramatically alter her appearance for fan edits. She shared on her Instagram story: “I am noticing more and more pictures my fans are posting of me where my face is edited. My nose is often made smaller and pointy, my chin is smaller, and my lips are bigger. Please STOP EDITING MY FACE. I look like what I look like. I like my face, flaws, and all. If you don’t like my face the way it is, then don’t post pictures of it.” Award-winning actor Lupita Nyong’o was not a fan of Grazia’s heavy-edited cover photo of her. Lupita Nyong’o wanted this to become the chance to show other dark, kinky-haired people, particularly children, that they are beautiful just the way they are. but Grazia completely smoothed out her kinks and curls, which completely defeated the purpose of the look.

In a now-deleted Instagram post, Nyong’o wrote: “I am disappointed that @graziauk invited me to be on their cover and then edited out and smoothed my hair to fit their notion of what beautiful hair looks like. Had I been consulted, I would have explained that I cannot support or condone the omission of what is my native heritage with the intention that they appreciate that there is still a very long way to go to combat the unconscious prejudice against black women’s complexion, hair style, and texture.” Demi once told E! News how frustrated she was when people photoshopped her body without her consent and edited it to the point that it doesn’t look like her anymore. “Like, no no no, my thighs are bigger than that, can you put them back to the way they were? I’ve literally done that before where I’m like, ‘No, put my legs back on me. Those aren’t my legs,’” she said. In an effort to stand up against this trend, the singer posed for Vanity Fair completely nude and makeup free.