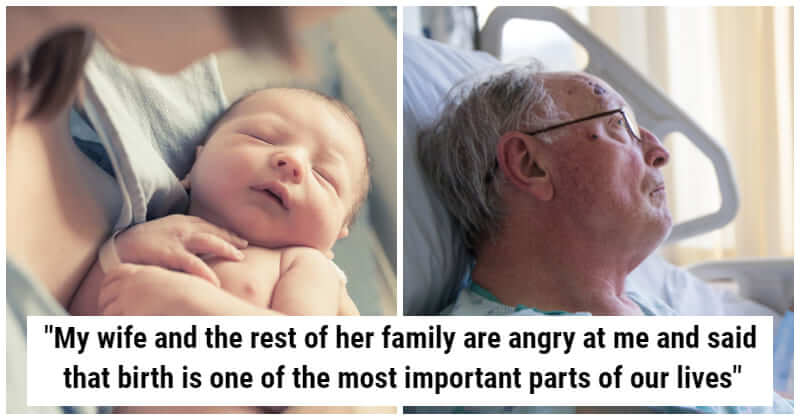 Every day, a sea of decisions stretches before us. While some are little and irrelevant, others have a larger impact on our lives. Therefore, making decisions is never simple. Although we carefully weigh all of the options and the pros and cons of the problem, we are not always able to make a perfect choice. Especially for family men, these moments are more poignant. Choosing one person over another, for example. Which one would you choose between your spouse and your parents? It’s tough, isn’t it?

Considering the case of the Reddit user in the story below. The guy felt like he was a jerk, a terrible husband to his wife, and an unfilial son to his dad. Then, he decided to post his story on the popular subreddit, Am I The A**hole? (AITA) to ask other people for their opinions. In this post, he shared that he was put under pressure in choosing between his child’s birth and his dying father. If you were him, what would you do? Staying for your child’s birth? Or leaving to meet your father? Scroll down to check out the whole story. And let us know your thoughts.

“The hardest decision of my life”: Guy asks Redditors for their opinion on whether or not he was a jerk for skipping his child’s birth to see his dying father Source: istockphoto (not the actual image) Here’s what Redditors had to say about his story: 20 People Share The Most Unique Parts Of Their Houses

15+ Funny Photos Collection That Make You Laugh To Tears

We All Have Rough Days, This Time I’m Just Glad Because It’s Them, Not Me

16 Most Awful Homes You’ll Ever Find On “That’s It, I’m Home Shaming”

New Fear Unlocked: Guy Refuses To Let Anyone But His Wife Cut His Hair After Getting A Haircut From A Barber

11 Funny Parenting Incidents That Are Just Too Funny