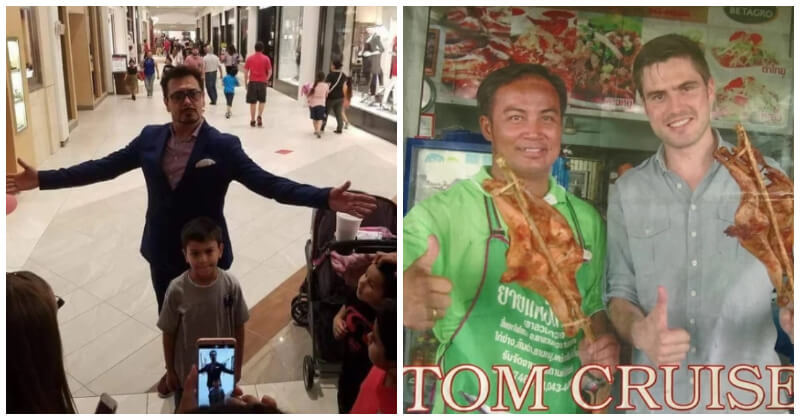 Taking a picture with a favorite celebrity is one of the coolest things to happen to normal people. This is especially true when it happens in a place where famous people don’t settle down or rarely frequent. So, it would be a massive shock when they realized that they got the wrong person.

In fact, many people hold the title of famous people’s doppelgängers. Because of their mistaken identity, they always get mobbed. However, what happens next completely depends if they tell the truth to the fans who get confused. And if they do, it can break fans’ hearts.

Scroll down to check out the pictures of “celebrities” whom people met and see if you’d get mistaken by their looks. Look at this man, we can guess that he is either a huge fan of Robert Downy Jr. or interested in grabbing others’ attraction. From the suit to the glasses, this man seemingly prepares for a mistake. Because of being so drunk, this guy mistook a man for Christ Pratt. It’s more hilarious when the other guy was so drunk to protest. Not one but three people thought this guy was Ed Sheeran. And look at “Ed Sheeran”’s smile, there is something mysterious. The man looks like exactly Johnny Depp when putting on eyeglasses with black rims and a bit of eyeliner on his water line. These women are so happy when they think they meet a famous actor. The lady yelled at Mark Wahlberg’s name when she thought she met a celebrity. She was over the moon when getting a picture with him. The guy was enjoying the attention when being hugged by a stranger. Well, you should take every chance you get to make people happy, right? This man was running a small restaurant so he took advantage of a picture that he took with Tom Cruise for marketing. Unfortunately, he got the wrong person. Luckily, this guy didn’t have the guts to walk up to the other table. Otherwise, he’d just be embarrassed to realize it wasn’t actually Vin Diesel. The man thought he was lucky enough to take a picture with Larry David. The man is spitting image of Michael Cudlitz, from his hair to his beard. The similarity is so uncanny. He looked so excited when taking a photo with his favorite star. It must be a huge shock if he knows that this guy isn’t John Legend. There was bad news to this girl that the man is not Black Shelton and of course, is not his twin either. I wonder how these ladies feel when they find out the man is not Rod Stewart. It looks like Deadpool has been kicked out of Hollywood. Here is a picture of him in his new uniform. Must admit that this person is a replica of Hugh Laurie.

Then And Now: 10 Sets Of Siblings That Were Child Stars