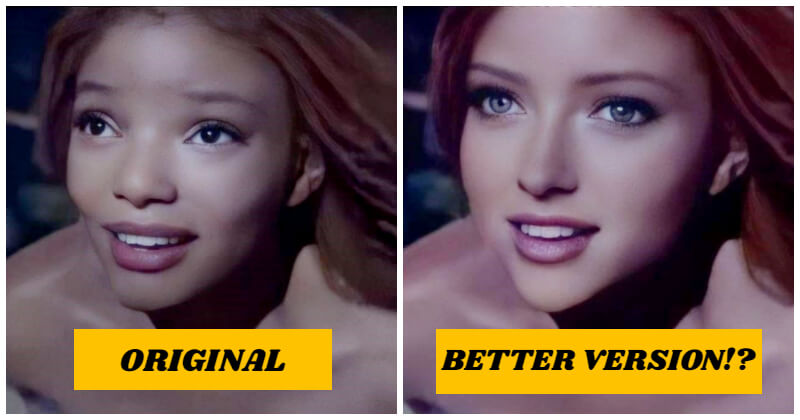 Disney’s most recent live-action The Little Mermaid started a controversial culture war. The movie featured Halle Bailey, a black actor as the main character – Ariel. Right after the trailer dropped, the video was bombarded with racist comments and more than 1.5 million dislikes. Hashtags like #notmyariel are bouncing everywhere around social media, raising many heated arguments over the skin tone of a fictional mermaid. Some even go as far as using AI to “fix” the movie, like the Twitter account named TenGazillionIQ.

🎶"Wish I could be part of that AI"🎶 pic.twitter.com/C1V8xogBgq

The engineer and the man behind the account TenGazillionIQ, Dr. Walid, seems to have since deleted the tweet, but it can’t hide the fact that Walid regularly posts anti-feminist and anti-diversity content online.

This is the “better version” of Ariel according to Dr. Walid

People are commenting everywhere and claiming that Hans Christian Andersen’s short story The Little Mermaid is a Danish story. That means the original mermaid should be Danish, therefore she should be white. Well, not exactly. According to the text, Ariel and the rest of her mermaid kin are from “far out in the ocean” at the “bottom of the sea”. So not Denmark or anywhere near it.

And if you were passionate enough to research the source material, then you will know that there isn’t any happy ending in Andersen’s short story. In the original ending, the prince chooses another princess, and the mermaid is told to kill her prince if she wants to reunite with her family. She chooses to throw the knife away in despair and dissolves into sea foam instead.

Andddddd it was originally a sublimated allegory for a closeted queer man. So there goes your “original” version.

The original The Little Mermaid is a queer man's self-insertion character, longing to be able to be in a relationship with another man, and at the end the mermaid dies.

You don't care about the original, mate.

On the other hand, outraged fans of the classic Disney animation are spitting fire. They claimed that Disney should have stuck to the beloved 1989 version and honored it by casting the actors with the same features as the characters. But looking back at it, the first Disney version made Ariel’s home a fictional amalgam of Greek and Mediterranean mythology somewhere in the middle of the North Atlantic sea. So the idea of strictly Caucasian mermaids is a stretch.

Many are enraged that their little mermaid is not a sexy aquatic caucasian redhead like this.

Not only that, Jodi Benson – who voiced Ariel in the original 1989 animated film, shared a congratulatory note on social media over the weekend praising Bailey’s take on the role. She was excited about the upcoming movie and even praised Halle “Halle, you were absolutely amazing! I’m SO proud of you and your beautiful performance as Ariel.” If even the original Disney mermaid supported the new one, then what is your excuse? Kat Tenbarge of NBC News called the criticism out for what it is, “just racism”.

There is no “deeper meaning” or misunderstanding as to why people hate Halle Bailey’s Ariel, whitewash her with AI, and dislike the trailer 7x the amount of likes. It’s just racism. It’s a constant in online fan communities. The people being racist know what they’re doing and why

Most importantly, the release of the trailer has been inspiring little kids everywhere. It might be hard to imagine why this is inspiring to white guys. They grew up with no end of TV shows and movies starring boys and girls who looked like them. But try to put yourself in black people’s shoes. Those people grew up rarely seeing someone like themselves be a hero onscreen. The reaction of black girls watching the Little Mermaid trailer and getting excited “she’s like me! She’s like me!” is just undeniably wholesome. If you are upset with that, then there is something deeply wrong with you.

At the end of the day, we can all see the ridiculousness in fighting over the proper skin tone of a half-fish girl. She isn’t even real in the first place, so why should it matter if her skin is dark or pale?