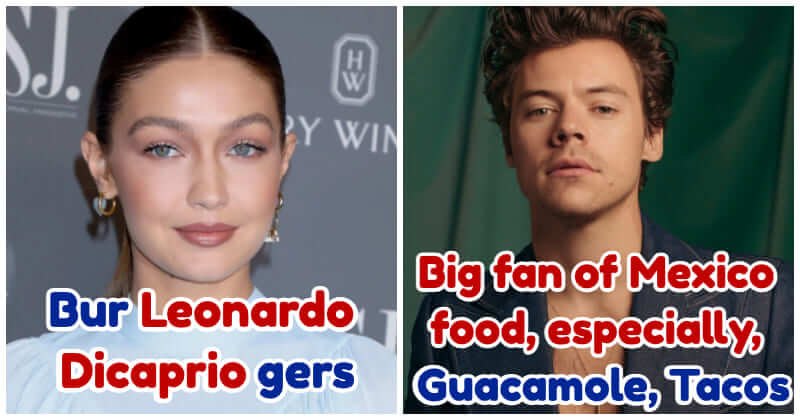 The question begs to be asked: what’s your favorite dish? In general, everyone owns at least one. There is always that one meal, sweet, or packaged corporate treat that you can’t get enough of. The dish you always prepare for special occasions. The one thing in your pantry that makes your sadness more manageable. The dish always makes you think of them when you eat it. The one dish that makes all other meals worthwhile.

Each of us has our own “one food.” Such as your most admired literary figure, musical artist, or historical figure. Their preferred dish shows that they are not so different from us. Perhaps you and a famous person have the same favorite dish. At the very least, that actor from the movie you saw a few months ago. Harry Styles has always loved Mexican food, even back in his One Direction days. Harry is happy to eat Mexican food for any meal of the day. I mean, who could blame him? To be more specific, tacos and guacamole are two of Harry’s favorite foods. If you need any more proof that Harry Styles is just like the rest of us, consider the fact that he is a huge fan of Mexican cuisine. Jennifer Aniston loves a big plate of nachos. According to the information we were given, Jennifer stated that she would eat nachos out of the trash if she found any. She also likes to fry her chips when making a plate of nachos. She claims that cooking them in coconut oil is the key to delicious nachos. Katy Perry’s apparent fondness for fungus fits perfectly with her image. Katy adores mushrooms not only for their deliciousness but also for the health benefits they provide. She has a soft spot for several different types of mushrooms, but truffles are her absolute favorite. Among all mushrooms, truffles are the most pricey to purchase. We can’t say we blame her for being so fond of them; their flavor is exceptionally robust. It’s common knowledge that Selena Gomez, the famous singer, has a serious obsession with pickles. Pickles are one of Selena’s favorite foods, so she packs them for every concert. She can’t leave the house without her favorite snack. We can understand why pickles have such a special place in her heart because they are tasty. All of Jennifer Lawrence’s adoring followers must agree that she is as refreshing as her preferred snack food. Some individuals enjoy these crunchy ranch-flavored chips, but Jennifer Lawrence is the only one who has publicly declared them to be their favorite. Congratulations, Jennifer! What about burgers? Do models chow down on them? The case here most certainly does! Gigi Hadid says that burgers from JG Melon are her absolute favorite fast food. So, as Gigi puts it, “eat clean to keep healthy, enjoy a burger to stay sane.” This model has no shame in admitting she enjoys a delicious burger now and again. She’s the kind of role model young women, who often struggle with their weight and eating habits, need to see today. Candied yams are known as sweet potatoes in the United Kingdom. The famous Kylie Jenner likes them no matter what you call them. Kylie’s first recipe for her cooking show on YouTube was this extremely sugary dish, which quickly became a fan favorite.

No Talent, No Problem: These Stars Are Famous For Doing Nothing At All