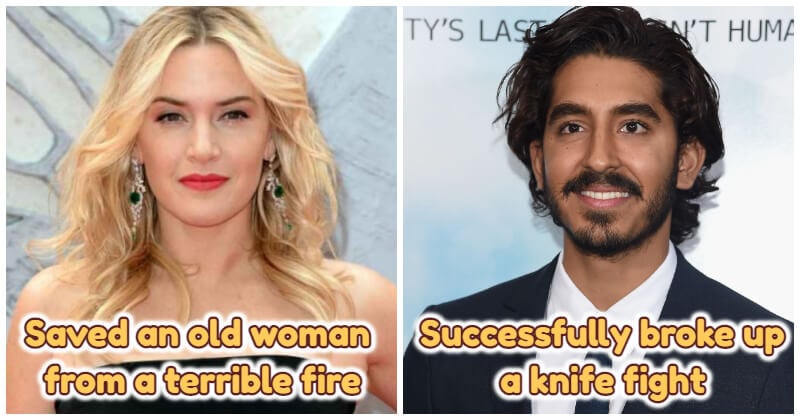 Since the dawn of celebrity culture, public figures have been notoriously associated with narcissism and arrogance, often being known for being superficial about everything around them.

Sure, some of them play heroic characters in films and TV shows, but that doesn’t make them real-life superheroes, does it? However, life turns out to imitate art more than you might think.

But are they really saving ordinary people’s lives? You could argue that’s not their job. And you’d be surprised to learn that actors actually stepped up to the plate when the opportunity came up. Celebrities such as Leonardo DiCaprio, Tom Cruise, and Harrison Ford have intervened in real-life crises to save the lives of people in danger.

Throughout the years, numerous celebrities have saved lives by putting their own at risk. From successfully breaking up knife fights to rescuing surfers trapped in raging riptides, here are ten stars who have done such outstanding deeds that you’ll find yourself rooting for them more than ever. In 2018, Benedict Cumberbatch and his wife Sophie Hunter were riding in an Uber when they witnessed a Deliveroo cyclist being brutally assaulted by a gang of four muggers. Cumberbatch allegedly jumped out of the car and yelled at the attackers before engaging them physically.

“I had hold of one lad and Benedict another,” Uber driver Ma­nuel Dias told The Sun later. “He seemed to know exactly what he was doing. He was very brave. He did most of it, to be honest.” Dias went on to describe how the gang tried to harm Cumberbatch, but he fought back by pushing them off their tracks. “Then I think they also recognized it was Benedict and ran away… If he hadn’t stepped in, the delivery cyclist could have been seriously injured.” Slumdog Millionaire actor Dev Patel successfully broke up a knife fight in Adelaide, Australia, on Monday, August 1, 2022. A man and a woman were reportedly feuding in the street and later inside a service station when the former was stabbed in the chest.

“We can confirm that last night, in Adelaide, Dev Patel and his friends witnessed a violent altercation that was already in progress outside of a convenience store,” the actor’s representative told Variety. “Dev acted on his natural instinct to try and de-escalate the situation and break up the fight. The group was thankfully successful in doing so and they remained on site to ensure that the police and eventually the ambulance arrived.” Dolly Parton is literally out there rescuing lives when she isn’t helping to fund vaccine research or supporting the Black Lives Matter movement. Dolly Parton reportedly saved her nine-year-old co-star, Talia Hill, while filming Dolly Parton’s Christmas on the Square, by pulling her away from an oncoming vehicle.

“We were on set, and I was at the hot chocolate station, and they said ‘Go back to your beginning positions’,'” Hill told Inside Edition. “So, there [was] a vehicle moving, and I was walking, and somebody grabbed me and pulled me back—and it was Dolly Parton.” “One of the places I went was this amazing beach called Manuel Antonio that I didn’t realize had an insane riptide,” he told Playboy in 2018. “While I was swimming there—this is a story I’ve never told anybody—this Costa Rican girl and an American guy were swimming right next to me, and we were knee-deep. I went underwater for a second, and when I came back up he was screaming at the top of his lungs. Literally, in three seconds, the girl had been swept 150 yards out.”

Krasinski’s mother, fortunately, was a lifeguard and had taught him to swim from a young age. “At that moment, I didn’t ask anyone. There was no one to help me. I just went out and tried to save her, ” he explained. “And then of course when I got out there, I was in a crosscurrent with her. It was one of those moments of ‘Oh my God, you just made a poor choice and it might cost you your life.’”

However, Krasinski’s survival instincts kicked in, and he was able to get the girl “within 20 yards or so of the shore” before other surfers swam out to assist them the rest of the way. When a fire broke out at Richard Branson’s $70 million private residence in the British Virgin Islands in August 2011, Kate Winslet rescued his 90-year-old mother, Eve.

“I’d just about got outside and the rain was pouring down and I didn’t have my contact lenses in, but I was making my way out and Kate and her two children were behind me,” Eve told The Observer in 2014. “Then she just sort of picked me up and took me down four steps and that was it. I’m sorry, I can’t make a story out of it.” I suppose I might have been a bit slow for her.” Leonardo DiCaprio may not have fared well in large boats on Titanic, but that is not the case in real life. On December 30, 2019, DiCaprio and his girlfriend were on a rented boat with friends when they heard an emergency call about a man who had drunkenly fallen overboard from a yacht.

When the man was spotted and rescued in rough water, DiCaprio’s boat happened to be in the same area. “Leo and his friends and their boat captain decided to join the search and their efforts resulted in helping save a man’s life,” a source told People. “It was reported that the man had been treading water for 11 hours.” Meryl Streep and Cher were out for ice cream in New York City when they noticed a woman being assaulted in the distance. “We walk down the street and we hear screaming,” Cher said on The Late Late Show with James Corden. “We come around the corner and this gigantic man is ripping the clothes off of this girl. And Meryl starts screaming, and I start screaming, and we run towards this gigantic man and he turns and starts running towards us.”

“We split and he ran through us,” she went on. “We went up to the girl and all of her clothes were torn and she was clutching her bag. So we’re putting her together and trying to get her to look a little bit like she hasn’t just been ravished, and she looks at us, and she goes, ‘Oh, my God, I’ve been saved by Meryl Streep and Cher! ’.”

Streep had previously spoken about the incident at the Committee to Protect Journalists awards in 2017. “Someone else was being abused and I just went completely nuts and went after this man. Ask Cher—she was there. And the thug ran away, it was a miracle, ” she stated. Ryan Gosling rescued a woman in Manhattan from being hit by a taxi in April 2012. “I literally, literally just got saved from a car by Ryan Gosling. Literally. That actually just happened,” British journalist Laurie Penny tweeted first, sparking a Twitter frenzy.

“I was crossing 6th Avenue in a new pink wig. Not looking the right way because I am from London,” she continued. “Ryan Gosling grabbed me away from a taxi.” You’ll be disappointed to learn that Gosling didn’t say, Hey, girl.” However, he did say, “Hey, watch out! ” In 2021, the actor rescued co-star Elisabeth Shue from a helicopter’s active tail rotor between scenes. She began running to the back of the helicopter, unaware of the deadly spinning rotor, when Cruise “lunged after her, but only was able to grab her legs, tackling her to the ground.”
According to The Sun, aerial camera operator Bill Bennett admitted, “At that point, she turned white, and he pulled her back towards the front of the helicopter and they walked away,” “Tom had, in that instant, truly saved her life.”

In 1996, Cruise allegedly rescued five people who had become stranded in the Mediterranean after being forced to abandon their burning sailboat.