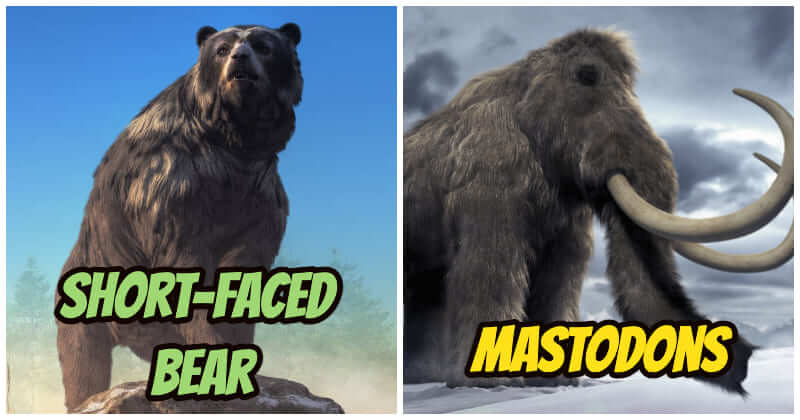 Have you ever wondered what animals 10000 years ago looked like? America’s cheetahs, massive armadillos, and sloths all called North America home until the end of the last ice age. However, it has long baffled scientists why these and other megafauna, or animals weighing more than 100 pounds, became extinct about 10,000 BCE.

According to research published in July by the journal Science, the demise of the continent’s megafauna can be attributed to rapid warming periods termed interstadials and, to a lesser extent, ice-age people who killed animals. The human aspect has been highlighted in other studies, and some researchers have pointed the finger at several contributing factors. There is no doubt that investigations and discussions into what led to the demise of these species will persist. Meanwhile, scientists keep unearthing fossils of these huge animals.

1. What Animals Were Around 12000 Years Ago? Mastodons According to the Yukon Beringia Interpretive Centre in Canada, mastodons (Mammut) arrived in North America some 15 million years ago over the Bering Strait land bridge, centuries before the arrival of their close relative, the mammoth. They were likewise far less developed than the mammoths. To gnaw on the leaves, twigs, and branches of deciduous and conifer trees, mastodons developed simpler teeth with cone-shaped cusps on their molars. Wetland plants were also a staple in their diet, MacPhee explained, because they had none of the abrasive substance typical of land plants.

According to an article published by Live Science in 2013, mammoths and mastodons both grew to a maximum height of between 2 and 4 meters (7 feet). Both were warm and snug in their shaggy coats. However, the mastodon’s huge, curving tusks may reach a length of 16 feet (4.9 meters). In comparison, mammoths’ tusks were more intricately curved. According to the San Diego Zoo, mammoths (Mammuthus) arrived in North America between 1.7 and 1.2 million years ago. Mammoths and mastodons belong to the same clade of animals called proboscideans, despite their distinct physical features. A story published in Live Science in February 2013 explained that mammoths’ fatty humps on their backs provided them with food and warmth during chilly seasons.

Compared to the mastodon’s cusped teeth, the mammoth’s flat, ridged molars were more advantageous for cutting through fibrous vegetation, as explained by MacPhee. MacPhee pointed out that modern elephants, particularly the Asian elephant, are closer to mammoths than mastodons. You may find these weirdest animals appearing on earth interesting. This massive bear didn’t have a small muzzle despite its moniker. MacPhee argued that it appeared due to the proportion of its short head to its long limbs and legs. Because its legs were at least a third longer than a typical grizzly’s, he likened it to a bear on stilts. He speculated that the animal’s speed was enabled by its “extremely lengthy forelimbs and rear limbs.” He said, “but they’re not runners.” Modern bears can burst into speed for short distances but are not runners.

The bear’s lengthy limbs continue to baffle researchers, though. This is no longer the prevailing explanation, but he did say, “One notion is that short-faced bears rushed down their prey as cats do.” “The reason they evolved to have such long legs is a mystery to us,” MacPhee added that scientists are now hunting for evidence that could tell whether the carnivore was a hunter, scavenger, or both. You may have an interest in these most dangerous under-the-sea animals.

If you could travel back in time 50,000 years, you would have been able to observe two different species of giant prehistoric elephants (Palaeoloxodon Namadicus and Stegodon Namadicus), as well as a hippopotamus, Hexaprotodon sp., and a zebra-like horse, Equus Namadicus, along with other great beasts that roamed the Indian subcontinent at the time.

‘No Words Can Measure How Much Pets Love Humans’, Showing In 25 Pictures