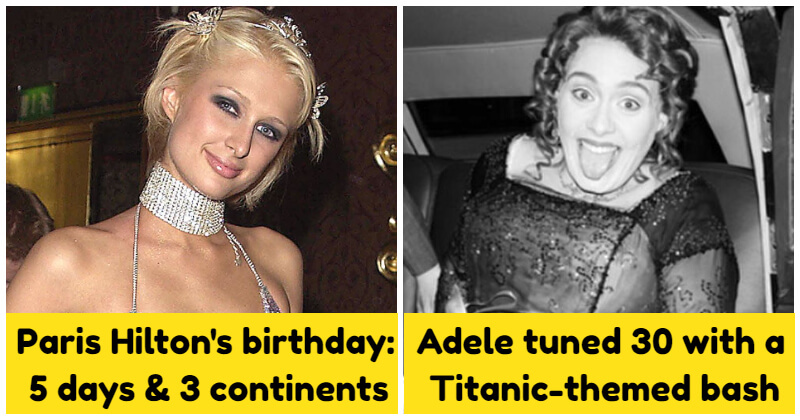 Do you enjoy attending celebrity parties? The ones with red carpets, paparazzi, and all the celebrities gathered in one place? Obviously, many of us do!

Whether it’s an exclusive occasion or a relaxed get-together with friends, these celebrities know how to have a good time. Even if you aren’t a celebrity, it’s fascinating to see all of the glitz and glamour that goes into their parties. These parties always have something new and exciting to offer, from unbelievable themes to jaw-dropping guest lists.

However, just because they’re famous doesn’t mean they don’t act strange at times. Or, you know, habitually. If you’re curious about what goes on at celebrity parties, keep reading! You will not regret it.

#1 Paris Hilton’s 21st birthday celebration lasted five days and took place on three continents! In 2002, Paris decided to celebrate her birthday for five days by throwing six parties in different cities around the world, including Los Angeles, London, Tokyo, New York, Las Vegas, and Paris. Her father paid everyone’s expenses, which were around $75,000 per guest, to ensure that everyone showed up. #2 Heidi Klum throws a luxurious Halloween party every year. The biggest attraction, however, is her bizarre theme selection. For example, in 2016, her costume was an army of Klum clones. #3 Perez Hilton celebrated her 32nd birthday with a star-studded carnival-themed bash. Guests included RuPaul and Liza Minnelli. Katy Perry arrived at the party on top of an elephant. #4 Beyoncé celebrated her mother’s 60th birthday with a New Orleans-style masquerade. Guests arrived at the venue wearing masks and in horse-drawn carriages. #5 Truman Capote hosted the Black and White Ball in 1966, which was attended by 540 of his closest celebrity friends. The party was so epic that it inspired an entire book. #7 Miley Cyrus’ 22nd birthday party in 2014 was an extraordinary occasion. Among the attractions were a mechanical penis ride and a massive pizza cake. She had a cake made that looked like her and had marijuana leaves frosted on it for her previous birthday. #8 During a short trip to Las Vegas, Prince Harry met Ryan Lochte and challenged him to a swim race. Lochte accepted his dare, and the two jumped into a pool while wearing their clothes and swam. Prince Harry narrowly lost. #9 Adele celebrated her 30th birthday with a Titanic-themed bash. The singer, who is obsessed with the film, threw an extravagant party with costumes and life jackets as party favors. #10 Saturday Night Live’s 10th Anniversary after-party featured live jamming on stage by many big names on the list. Highlights of the night included Paul McCartney’s duet with Taylor Swift on ‘Shake It Off,’ Ariana Grande’s harmonies with Michael Bolton, and Bill Murray’s supporting act with a tambourine. #12 Katy Perry kept the Charlie and the Chocolate Factory theme for her 25th birthday party and asked everyone to wear white. It was later revealed to be a paint and cake-throwing party. #13 When French fashion designer Yves Saint Laurent launched his new perfume Opium in 1977, he hosted a lavish party. The party was so extravagant that Andy Warhol expressed regret for missing it. Cher and Truman Capote were among the 800 guests. The lavish decor included 2,000 Hawaiian white cattleya orchids and a 1,000-pound Buddha. The cost was estimated to be $300,000, or $1.25 million in 2019 dollars. #14 Richard Branson and his male relatives performed a Chippendales-style dance on stage at his mother’s 90th birthday party. They finished their act by stripping down to their underwear. #15 Sir Elton John celebrated his 50th birthday with a masquerade ball attended by 60 celebrities. He wore a massive Louis XIV wig that had to be carried on the back of a 30-foot truck that he outfitted with a massive velvet throne. 8 Movie Villains Who Turn Out To Be The Hero (Probably)

20 Celebrities Who Have Been Volunteers That You Might Not Know

10 Celebrities With Hidden Talents That You Never Would Have Guessed