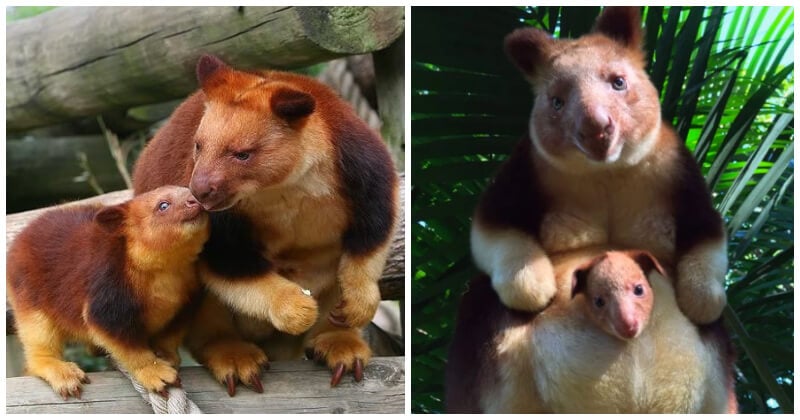 Have you ever heard of Kangaroo? Of course? Anyway, that unique animal of Australia is too famous not to know about! How about a tree kangaroo? Never? Don’t worry because it is totally understandable if you’ve never heard of that elusive species’s name. Let us introduce to you this adorable animal! It contains many traits similar to Kangaroo, which explains its name, apart from the super fluffy body making it look like a cute bear. If you guess that these cute “bears” come from Australia, especially the northern regions, you’re right. However, they may also be found in the mountainous and lowland forests of Papua New Guinea and Indonesia. As the name indicates, tree-kangaroos reside in the trees. Their body has evolved with stronger forelimbs and shorter legs to adapt to their habitat. This beautiful species is so rare that most of us don’t even know its name. Luckily, in 2016, a tree kangaroo was given birth in captivity for the first time after 36 years. This has fortified conservationists’ hope to increase this species’s population and protect it from extinction.

Scroll down to see more brilliant images of this incredible animal! Let’s share these adorable pics with your fellow animal lovers to fill their day with a lovely vibe! Don’t forget to comment your thoughts about the fluffy tree kangaroo in the section below!

Dog Digs A Big Hole Under A Grave, And The Reason Behind Startles Internet

Man’s Pissed Off For Paying $667.39 To Be Told His Dog Has To Take Sh*t, But People Say That’s Normal

What Is The Best Animal Crossing? Ranked From Best To Worst