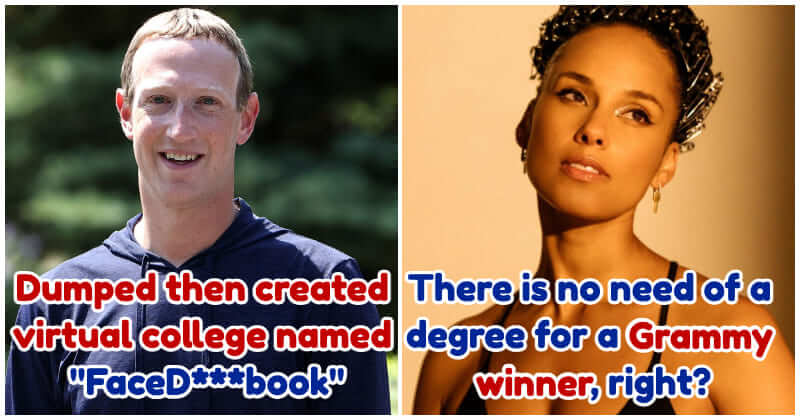 Even though some famous people, like Natalie Portman and Emma Watson, have impressed us with their dedication to their education despite having extremely busy schedules due to their successful careers in the film industry, not everyone in Hollywood has a degree from an accredited college or university.

However, this does not mean that most of the actors and singers you admire did not at least attempt to pursue further education before ultimately deciding not to continue their studies for various reasons. Scroll down to see the list of the nine celebrities who didn’t have a college degree. Anyone who has seen The Social Network knows that Facebook’s creator, Mark Zuckerberg, famously left Harvard to devote himself to building the site. However, he is not alone in this regard; other technological luminaries like Steve Jobs and Steve Wozniak also had abbreviated academic careers. The actress tried to balance education with employment on That 70’s Show for a while, but she eventually dropped out. This business tycoon is proof that a university degree isn’t required to make it big. Although Oprah Winfrey just needed one more credit to graduate from Tennessee State University, she left early to pursue a career in television. The actor, best known for his on-screen roles, left Sacramento State to intern full-time at the Great Lakes Theater Festival in Cleveland, Ohio. The Oscar winner was all set to become a journalist and graduate from the University of Missouri until, two weeks before his graduation, he upped and went to Los Angeles to pursue a career in the film instead. This actress from Les Miserables spent time at both Vassar College and New York University, although she did not graduate from either. This Grammy winner attended Columbia University before deciding to join Columbia Records instead. Before dropping out and recording his breakthrough album, The College Dropout, this rapper and fashion designer studied at the American Academy of Art and Chicago State University. It comes as no shock that this famous singer studied at NYU’s prestigious Tisch School of the Arts. However, she left school to concentrate on her professional life.

9 Testiest Actors Who Are Notoriously Hard To Work With

6 Actors Who Were Fired From Stable Paying Gigs