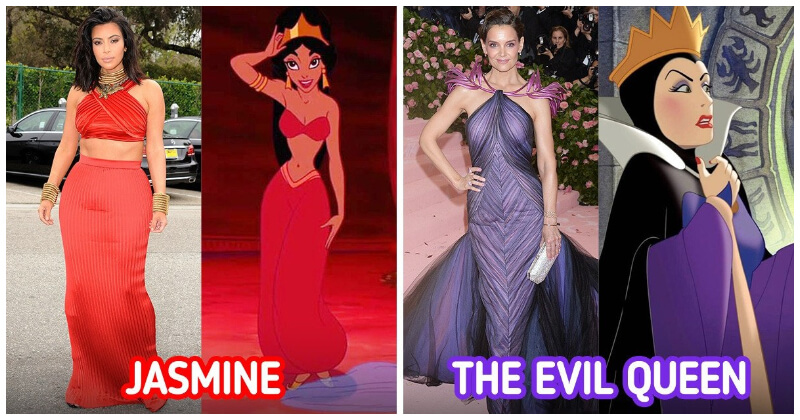 As a child, many of us dreamt of becoming a pretty princess: waiting for a charming prince to rescue them from evils, finding true love, or embarking on an amazing adventure. Sometimes, we just wished to put on gorgeous gowns of Disney princesses, look at ourselves in the mirror and say “wow”.

When growing up, we try to be sophisticated but our love of Disney princesses can’t be shaken. Celebrities are no exception – they’re huge fans. We feel excited when seeing any celeb steep in a princess dress on the red carpet. Stars like Taylor Swift, Kim Kardashian, Rihanna, and other celebrity women chose princess-like outfits for their red carpet appearances and totally stole our hearts. Katie Holmes’ dress gave us chills because we instantly thought of The Evil Queen from Snow White and the Seven Dwarfs. Katie Holmes looked elegant in a purple dress designed by Zac Posen.

#3 Lena Dunham as Belle from “Beauty and the Beast” For the 2014 Golden Globes, she chose a Zac Posen dress. The strapless bodice was more flattering than most of Lena’s worn, and her tousled hair and light makeup were nice compliments to the bold dress.

#4 Lana Del Rey as Ariel from “The Little Mermaid” #5 Keira Knightley as Rapunzel from “Tangled” Amy Adams wore her jaw-droppingly gorgeous Oscar de la Renta dress to the Academy Awards. Beautiful and feminine all in one she ticks all the boxes for an Oscars gown. Lupita Nyong’o looked damn near flawless in a green dress at the opening ceremony and premiere of La Tete Haute (Standing Tall) during the 68th annual Cannes Film Festival.

#8 Diane Kruger as Elsa from “Frozen” At the premiere of “The Sea Of Trees” during the 68th annual Cannes Film Festival, Diane Kruger looked glamorous in a blue halter-necked frock that featured gossamer side panels from the waist to the floor. Cate Blanchett stepped out in pink silk last night with black sleeves and hem at the AACTA Awards in Sydney.

#10 Katie Holmes as Belle from “Beauty And The Beast” Wearing Marchesa at the Met Gala in 2014, Katie Holmes was seriously channeling Belle’s most regal moment from “Beauty and the Beast”.

#11 Kim Kardashian as Jasmine from “Aladdin” Kim Kardashian put on a Lanvin eagle choker, which featured Balmain rope cuffs and a necklace. Lupita Nyong’o tried to show the world she could be the perfect Disney princess by wearing a beautiful blue Prada dress for the evening.

#13 Julianne Hough as Ariel from “The Little Mermaid” Julianne Hough looked so beautiful in a bustier gown by Georges Hobeika at the 64th Annual Prime Time Emmy Awards in Los Angeles. Penélope Cruz reminded us of Princess Aurora from Sleeping Beauty when wearing a stunning Armani gown to the Oscars.

8 Bizarre Reasons Behind How These Actors Got Their Legendary Roles

4 Movies That Rihanna Played In: Her Debut Role Earned A Golden Raspberry Award