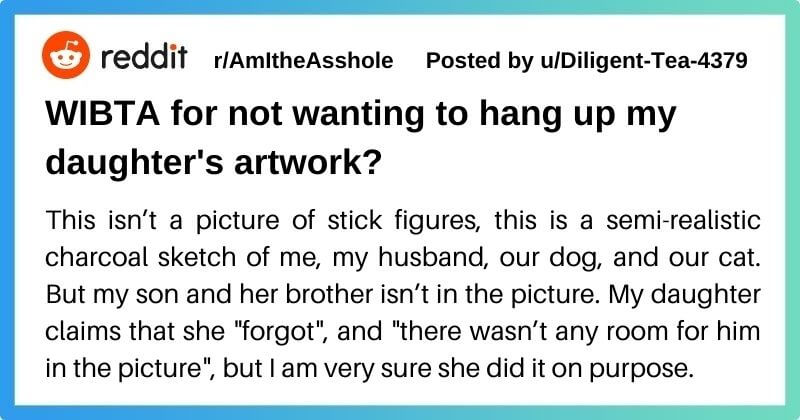 Even though animal adores often say that pets can fill up the void in their hearts, it is sad and worrisome to see these furballs as replacements and cover for abomination and resentment. Recently, Reddits were caught in a callous children’s war, where young siblings abused each other and cried out for help. Whether we should pull a judgment on them, we will let you decide after picturing the whole context. The original poster (user account name u/Diligent-Tea-4379) pinned her story on the solicitous subreddit community r/AmItheA**hole. She detailed her family: she, her husband, a twelve-year-old artistic daughter, a ten-year-old mischievous son, a dog, and a cat. For the past few weeks, the young girl had been working so hard on her new artwork – a semi-realistic charcoal family portrait, which included every member even the pets, but not her brother.

Despite the daughter’s elucidation, the OP believed the painting was meant to cause emotional damage to the little boy. Previously, her son had teased his sister a lot and ruined her painting tools. However, latterly, the siblings didn’t fight or yell at each other, so the parents supposed things were getting better. The husband thought they should hang the artwork in the living room. Meanwhile, the OP claimed that she would never accept the family concept of having a place for pets but not her son.

Responses to the OP’s post were mostly concerned about her family’s awful condition. Redditors agreed that her daughter’s painting shouldn’t be hung. Nevertheless, getting rid of the portrait wasn’t near the end of the story because that painting represented the girl’s inner voice, which needed listening and guidance, not rejection.

Reddit had a feeling that the OP saw her daughter as a petty teenage sister who was trying to bully and take revenge on her younger brother. They assumed she had turned her blind eye to her son’s shenanigans and only reacted to the girl’s misbehaviors. Also, Reddit advised that the whole family went to the therapist because none of them seemed to have a clue about what was happening in their house.

On the other hand, some people took on the OP’s side since they expected the elder sister to forgive her brother and stop being cruel to him. If she didn’t want to, then her parents should narrow the hatred for her own such as only permitting her to hang the portrait in her room.

We would like to know your opinions if you don’t mind sharing them. Please write them down in the comment section below and don’t forget to hit the like-share button!

Meet American Dipper, The Only Aquatic Songbird In The World That Can Walk Underneath The Water

This May Be The Happiest Baby Orca On Earth