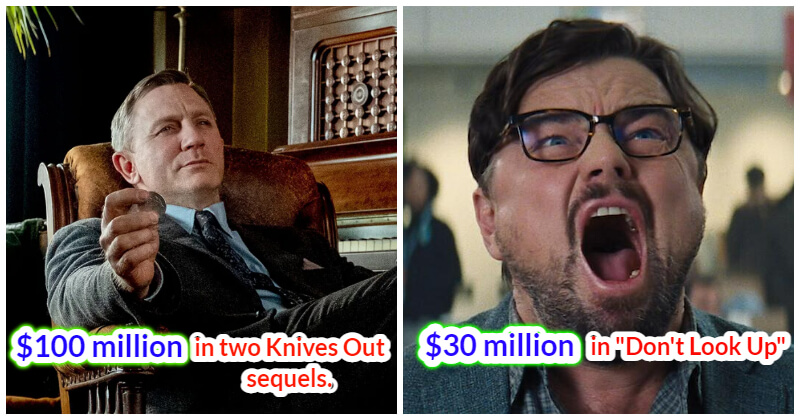 Have you ever wondered how much actors were paid per film, especially high-grossing ones? A topic of curiosity. There are many factors that contribute to the commercial success of a film. The cast, music, effects, costumes, and more. The film’s revenue should cover all these expenses.

The global box office is one of the main revenue sources for a movie. If a film is a huge box office hit, it will definitely be a high-grossing one. Additionally, filmmakers, producers, and studios turn a profit through merchandising, VOD, streaming video, foreign sales, and distribution channels.

This post, however, focuses on the amount that actors earned with their huge box office hits. Did you know that Daniel Craig earned a huge fortune of $100 million with the Knives Out sequels? Daniel Craig is the highest-paid actor. He got over $100 million to star in two “Knives Out” sequels. (The sequels grossed $311 million globally). Dwayne “The Rock” Johnson gets a whopping $50 million paycheck from Amazon Studios for his role in “Red One”. Will Smith portrays Richard Williams, the father, and coach of famed tennis players Venus and Serena Williams in HBO Max’s King Richard. He was paid $40 million. Denzel Washington earned $40 million for his performance in “The Little Things” (2021). DiCaprio earned a $30 million payday for his role as astronomy professor Dr. Randall Mindy in “Don’t Look Up”. A report says Mark Wahlberg was handed an astonishing $30 million for his role in the action-comedy film “Spenser Confidential”. Jennifer Lawrence was paid $25 million for her performance in “Don’t look up”, which was about $5 million less than DiCaprio. The Academy Award-winning actress received a massive $25 million for her starring role in Leave the World Behind. Chris Hemsworth has been paid a whopping $20 million to star in his latest Marvel movie, Thor: Love and Thunder. Jordan received a solid $15 million paycheck for starring on Amazon’s Without Remorse. Tom Cruise reportedly received $13 million for starring and doing his own stunts in Top Gun: Maverick. Keanu Reeves earned a sum between $12 million to $14 million for his leading role in The Matrix 4. Robert Pattison received a low salary of “only” $3 million for his starring role in “The Batman”, a relatively low sum for such a major blockbuster.