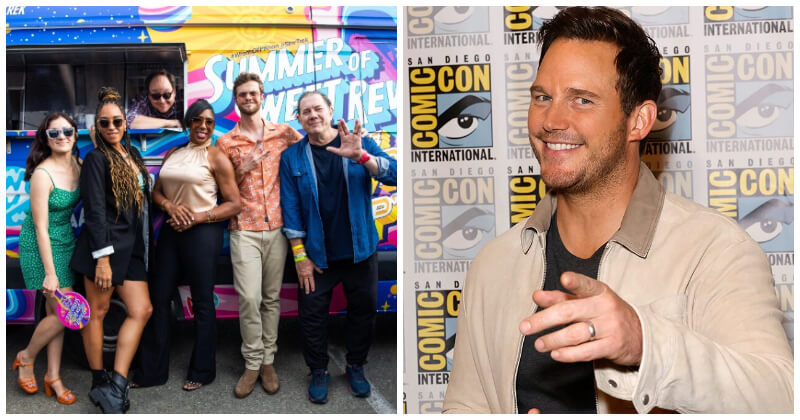 After two years of virtual and scaled-down events, Comic-Con International: San Diego returns as a full-fledged live event. The four days of everything nerd or geek-related have had a chance to shine in the Southern California sun once again.

So, what happened there, and is there any news from the event? While it may appear to be a smaller, calmer show on the outside, a peek at the panel programming for the weekend indicates that at least one day will be jam-packed with film and television content. What’s more, you will see a lengthy list of notable celebrities gathered in San Diego for Comic-Con International to reveal some exciting new projects. Regé-Jean Page, Chris Pine, Hugh Grant, Chris Pratt, Paul Rudd, and Simu Liu were just a few of the celebs in attendance.

Besides, Page, Pine, Grant, and Rodriguez all appeared together during the Dungeons & Dragons: Honor Among Thieves panel. Pratt, Rudd, and Lily attended Marvel’s highly anticipated event, which introduced Phases Five and Six of the MCU. And the biggest crossover of all time happened during the event when the casts of The Lord of the Rings: The Rings of Power and Game of Thrones: House of the Dragon were observed hanging out together.

Here, we’ve rounded up some of the standout moments of celebrities from the 2022 San Diego Comic-Con. Keep reading for more celebrity pics! We hope you will be interested! Singer Kesha wearing Burn Baby Top at Comic-Con San Diego, styled by Turner. She showed up to offer a sneak peek at her docuseries “Conjuring Kesha.” Chris Pratt attends the Marvel Cinematic Universe press line during 2022 Comic-Con International. He greeted photographers with a smile at here. Lupita Nyong’o went for a colorful look to join the cast of “Black Panther: Wakanda Forever” at the annual convention. The Oscar-winning actress wore a color-blocked maxidress from Alfredo Martinez paired with Stuart Weitzman platform sandals. “Ant-Man and the Wasp” star Evangeline Lilly records the crowd as she walks out to join Kathryn Newton (left) at the Marvel panel. Maria Bakalova is entering the Marvel Cinematic Universe in “Guardians of the Galaxy Vol. 3.” The actress joined the film’s cast at the panel discussion wearing a metallic silver. The cast of Star Trek: One way to cool off and fuel up for SDCC was to stop by the Wrath of P’Khan ice cream truck. And some lucky fans were treated to a far-out experience when the Lower Decks crew stopped by to serve up some tasty ice cream sandwiches! The Shang-Chi and the Legend of the Ten Rings actor attends Entertainment Weekly’s annual Comic-Con bash at Float at the Hard Rock Hotel San Diego. He kept it casual in a blue crewneck sweater that was paired with a set of slim-fitting black pants. The cast and creative team of the Disney+ Original series “The Proud Family: Louder and Prouder” got “loud” at San Diego Comic-Con on Friday, July 22, 2022. Here’s Cobie Smulders fresh off of exiting Hall H, where she shared a little bit about what it felt like to return to the splendor of Comic-Con’s biggest Hall after all this time:
“I think I forget what an impact that Marvel has made, and not only on people and the excitement of the crowd … but the [Marvel Cinematic Universe] has just become so large and inclusive and diversified, and it’s just been really exciting to get a front row seat to that type of evolution.” Tatiana Maslany is the star of the new series “She-Hulk: Attorney at Law.” She dressed in a blue and white checkered bralette paired with a matching maxi skirt. Jameela Jamil is supervillain Titania in the upcoming “She-Hulk: Attorney at Law.” “The Guardians of the Galaxy” stars: Karen Gillan looked effortlessly chic as she spoke at the Marvel Cinematic Universe Mega-Panel during Comic Con Day 3 at San Diego Convention Center. Standing beside her is Chris Pratt who cut a casual figure in black jeans. Tiffany Haddish popped at San Diego Comic-Con 2022, thanks to a bold and sporty outfit. A powerful prop – the magic staff! The Charlie’s Angels actress’s set to play the character Kalypso in the film. Frankie said that it was his 13th time attending Comic-Con and that he was very excited to be back. The youngest Jonas brother shared that he’s been attending the convention since he was a little kid. Keanu Reeves appeared at Comic-Con on Friday to talk about BRZRKR, his comic from Boom! Studios. The book is written by Reeves and Ron Garney and follows half-god B. as he wars through the ages. The Shazam star returns to Comic-Con to reveal the trailer for Shazam: Fury of the Gods. Our favorite TV scientist who promotes his new Peacock series The End is NYE. Terry Crews & Danny Ramirez laugh as Terry Crews (center) takes his shirt off during the “Tales of the Walking Dead” panel.