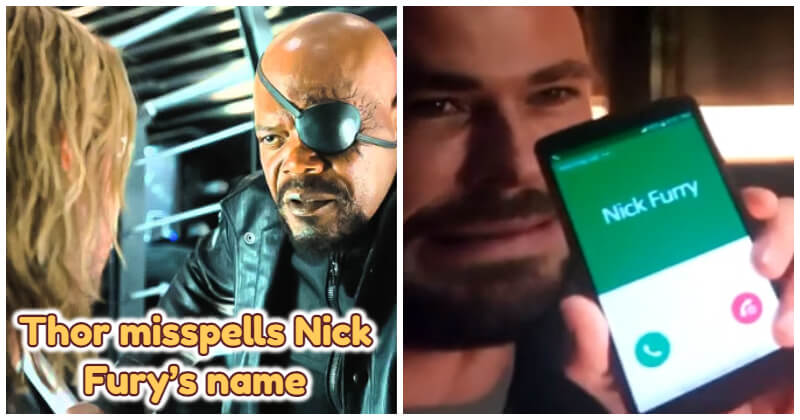 Marvel’s success comes from both comic books and movies, where a lot of characters with extraordinary stories amaze fans every time the studio announces a new release. When it comes to Thor: Love and Thunder, this movie is regarded as a big hit this year when Thor enlists the help of Valkyrie, Korg, and ex-girlfriend Jane Foster to fight Gorr the God Butcher, who intends to make the gods extinct. Surprisingly, the movie contains many details that you may not have noticed back then.

So we have compiled a list of 13 exciting facts that will leave you in awe. Make sure that you are ready and don’t miss them while you were in full rage enjoying the flick. In addition, there’s a bonus at the end of the article that you shouldn’t ignore. Now, let’s scroll down and enjoy!

#1 He wears a cap with a clear message. We can easily find out him wearing a cap that says: “The strongest Avenger” when he is training. That’s a funny detail that many may have overlooked and is typical of the humor that these movies and the director of the project, Taika Waititi, try to show.

#2 We see Chris Hemsworth making out with his wife on the screen. Elsa Pataky, who is known as Chris Hemsworth’s wife, appears in a flashback dressed as a wolf woman kissing Thor. Amazingly, she has been seen on screen kissing the Avenger more than once. She priorly stood in for Natalie Portman for a romantic scene when the Black San actress couldn’t be there. It’s a big surprise when the actor who portrays Thor and appears in the movie for a while is one of the sons of Chris Hemsworth. We can see him running in a scene where Thor is still a child. The funny thing is Thor misspells Nick Fury’s name on his phone. We can realize it in a flashback of his relationship with Jane when he calls him, and it is written “Nick Furry.” According to  Norse mythology, Yggdrasil is the tree of life. In the first scene of the movie, Thor wears a T-shirt that the image appears on.  In the Marvel universe, they mention it.

The hero talks about it in the first movie, that the Yggdrasil is a gigantic tree that sustains the universes and is the base of the 9 realms, with one of its roots in Asgard.

#6 We see Thor’s tattoo in tribute to Loki. Thor and Loki’s relationship was tough, but there was a bunch of love deep down. In the scene where Thor faces Zeus, we can see a tattoo on his back. It’s the horns his brother used to wear and a “RIP LOKI,” a straightforward tribute to his death.

At the film’s beginning, Thor receives as a gift a pair of goats that scream outrageously. These goats are familiar to those who read the comics or know anything about Norse mythology, as they are the ones that pull Thor’s chariot. In the movie, despite their irritating howls, they are a fun detail.

#8 Stuntmen did more than just stunts. Chris Hemsworth’s stunt double acted not only in the action parts of the film, but he also made a cameo as a different character and proudly shared it with the fans. On the other hand, Natalie Portman’s stunt double not only replaces her in complicated scenes but also plays a pirate in love with Thor.

#9 They make an apparent reference to Interstellar. In the film, there is a scene in which Jane Foster explains to a young man the theory of holes in space in a bizarre way using a pen and a leaf. It also refers to 2 flicks that have this type of science, one of them being Interstellar.

#10 Everything stays in the family. Many children of the main characters have starred in this film, not only Chris Hemsworth but also the children of Christian Bale and director Taika Waititi. Natalie Portman’s children were also involved in the production. Thor gives a speech similar to the one Odin gave in Thor: “Whoever wields this hammer if he is worthy, will possess the power of Thor.” This is a subtle reference to the movie that started it all.

#12 We spotted some familiar faces. Someone gets to see many familiar faces, from Melissa McCarthy, Luke Hemsworth, Chris’ brother Chris, and Kat Dennings to Russell Crowe and the whole cast from Guardians of the Galaxy, among others. And then there’s Matt Damon portraying Loki in the new, touristy Asgard.

#13 The multiverse is real for Christian Bale. Not many actors, especially those who have starred in DC or Marvel movies, have switched sides between the two universes. But one of them is Christian Bale, who portrayed Batman a few years ago and now gives us a stellar performance as Gorr, the villain in Thor: Love and Thunder. The end credits show a change in the story and the introduction of what appears to be the new villain: Hercules. He is portrayed by Brett Goldstein, known for his portrayal in Ted Lasso.

Stay tuned for more funny and entertaining posts on http://aubtu.biz. This is your daily source for celebrity and movie funny memes!

Why Bella Poarch Divorced Her Secret Husband After 4 Years Hiding?