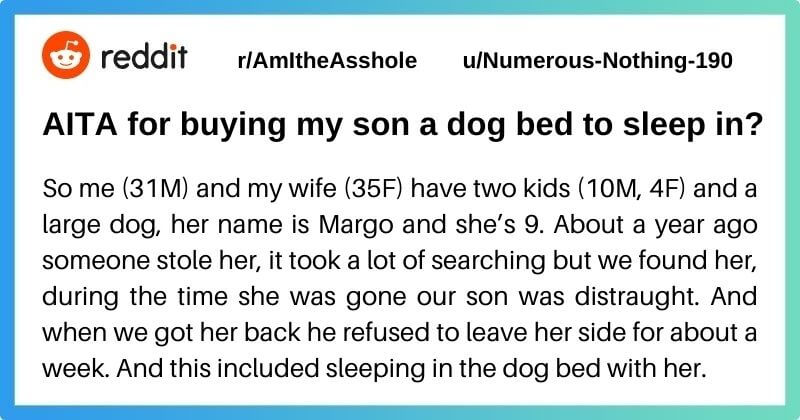 We have faith that pets can be the best friends ever for children. We are sure many animal lovers grew up with those furry buddies and have memorable childhoods. However, occasionally, unexpected incidents happen, which will create big emotional impacts on vulnerable kids. That’s when adults need to put their heads into the search for solutions. But what if the adults don’t see eye to eye and invalidate each other’s efforts? Well, we might need advice from more people and even the communities. A man (user account u/Numerous-Nothing-190) having relevant trouble pinned his question on the most viral subreddit r/AmItheA**hole. His family had a nine-year-old female pet dog that had been stolen once and luckily could return home afterward. Due to the stealing, their ten-year-old son was traumatized. He always clung to the dog and even slept on her bed by her side, which made his mom – the original poster’s wife think it was filthy.

Therefore, when the wife wasn’t home, the OP had the idea of getting his nervous child a large dog bed that looked like the dog’s one and had the son’s favorite color. The boy loved it. But his mom found the new bed an insult. She claimed she didn’t want to be the bad guy, yet she would throw the bed away if it kept being in her sight. Her stiffness made the OP wonder whether he missed something somewhere.

Answering the OP’s question, Reddit thought he was a good dad and delicately care about his son. They supposed it was nothing wrong with adults or children taking naps on dog beds, which were actually differently designed cushions and pillows. As long as they were clean and no one was forced to sleep on them, they were so far from the “treated like a pet” level. Plus, they cited the kid’s reaction as the most important: He was comfortable thanks to the new gift, then, it was worthwhile.

Besides, Reddit tried to figure out the OP’s wife’s problem. They expected her to support him since she didn’t seem to have any ingeniously effective solution for the boy’s fear. The way she overreacted pulled a trigger on their minds that she was too obsessed with the title “production for dog”. Henceforth, some comments offered several ideas and advice to the OP so he could explain the bed case to her.

As many Redditors shared their souvenirs, we would love to hear some from you. Please write them down in the comment section below after hitting the like-share button and following us! We’re waiting to see you again in our upcoming pieces!

Unbelievable Discovery: Australia Found A Fluffy Crab Wearing A Sponge As A Hat

Meet Moo, The Adorable Dachshund That Looks Like He Has The Body Of A Cow (30 Pics)

10 Interesting Facts You Need To Know About Jackal Animal

“Mentally, She Was Not There”: Woman Lived With Strange Dog For Four Months Because Dog Groomer Returned Wrong Dog To Her

Couple Stops Allowing Kids To Play In Their Backyard After Neighborhood Karen Demands They Get Rid Of Their 2 Dogs, Asks Reddit If They Were At Fault