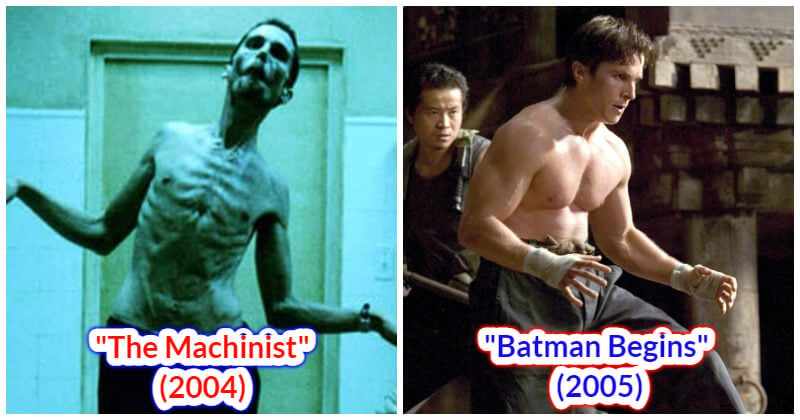 Actors change for their movie roles. It isn’t exaggerated. Many actors and actors have endured rapid weight loss and rapid weight gain to embed their roles. Christian Bale starved himself, shedding 63 pounds to convincingly portray insomniac Trevor Reznik in “The Machinist”. Meanwhile, Ryan Reynolds ate a wealth of high protein snacks, packing on 25 pounds of pure muscle in just three months for his character in “Blade: Trinity”. The process was brutal.

This list includes 17 male actors who underwent an incredible weight loss (and gain) transformation for their movie roles. Some spent months in the gym to improve muscle mass while some were involved in starving diets to lose weight as quickly as possible. Whether it’s weight gain or weight loss, these actors actually risked their lives for their roles. You won’t believe in their physical change before and during the filming.

Luckily, these actors’ physical transformation paid off. They nailed their characters. Their performances gained recognition and critical acclaim. Scroll down to see who they are! Christian Bale nailed the role of a machinist with severe insomnia Trevor Reznik in “The Machinist”. Bale survived off of a less-than-adequate meal of an apple and a can of tuna per day. The actor ended up dropping 63 pounds. Noticeably, he put on nearly 100 pounds in five months to play Batman in Batman Begins. Did you love the look of Ryan Reynolds in “Blade: Trinity”? The actor packed were involved in brutal training and a specific diet for three months to pack on 25 pounds of pure muscle. Rapper 50 Cent played a college football player fighting against cancer in the 2011 drama film All Things Fall Apart. The actor went on a liquid diet for nine weeks and shed 55 pounds for his role. Hugh Jackman had to extinguish all belly fat for his role as strong, relentless Jean Valjean in Les Miserables. He ate sparingly seven meals per day and do a mix of cardio and strength training for three hours. Jared Leto endured a rapid weight gain of 67 pounds for his role in Chapter 27. The legendary rock band frontman ate a diet rich in extremely high-fat snacks. Ice cream mixed with soy sauce and olive oil. Yes, it was. Leto gained so much weight so fast that his feet hurt so bad. He resorted to getting around in a wheelchair. Matthew McConaughey dropped 38 pounds when portraying AIDS sufferer Ron Woodroof in the film Dallas Buyers Club. During the course of 3 months, the actor survived off of egg whites, a bit of chicken, a small serving of pudding, and two Diet Cokes per day. Matt Damon played Mark Whitacre in the 2009 biographical-crime comedy film The Informant. The actor put on 30 pounds for his role but luckily, he shed it by the time the filming finished. Tom Hanks underwent an incredible transformation in the classic hit Cast Away. The actor shed 50 pounds in a year for his role and grew a long beard to enhance the scraggly look. Additionally, Hanks also dropped 30 pounds for his role in the movie Philadelphia. Colin Farrell dropped 44 pounds for his role in the movie Triage. The Irish actor consumed black coffee, Diet Coke, and two cans of tuna per day to have the skeletal look. Ben Kingsley lost 20 pounds to portray Gandhi in the biographical film of the same name aired in 1982. He went on a strictly vegetarian diet—Gandhi style. George Clooney put on 35 pounds for his role in the 2005 political thriller Syriana. He not only gained weight but also grew a bushy beard, which made him feel like he aged a decade. Chris Hemsworth shed 33 pounds to embody a shipwrecked man at sea in the film In the Heart of the Sea. He consumed as little as 500 calories per day, surviving off of hard-boiled eggs and salads. Russell Crowe gained a whopping 63 pounds for his role in the 2008 film Body of Lies. Cheeseburgers for breakfast, cupcakes, and a sedentary lifestyle – these impacted his health badly. Chris Pratt underwent an 60-pound weight loss transformation to play Peter Quill, i.e. Star Lord, in Guardians of the Galaxy. The actor adopted a strict Paleo-style diet and worked out every single day to slim down and sculpt his body. Robert De Niro underwent weight transformation, not once, but twice for the same film! The actor worked out hard to embody the iconic, muscular Jake LaMotta in Raging Bull then gained a whopping 60 pounds to play the character in his older years.

9 Wildest Back Stories From Favorite Celebrities