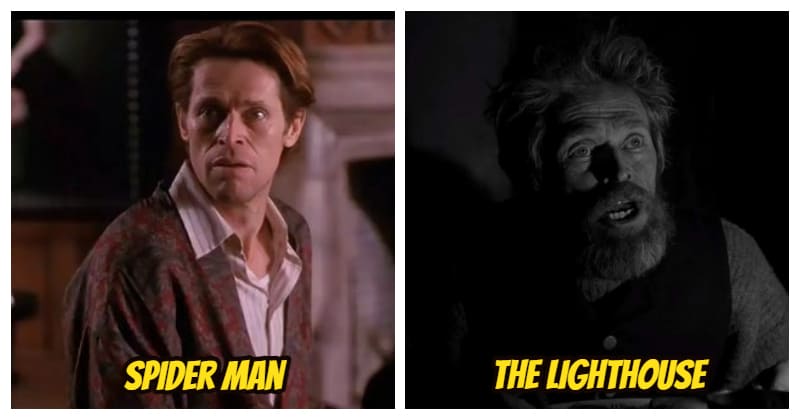 In the late 1960s and early 1970s, there was a new breed of movie star who was purely focused on the craft of character acting. With over 100+ films over the last 40 years, Willem Dafoe ranks near the top of the list of the greatest chameleon actors of all time.

While there are times when he has played characters on the side of good, he is frequently stereotyped as a villain to great effect. Due to his menacing features, particularly his maniacal grin and laugh, Willem Dafoe has everything to play a convincing villain.

However, labeling him as a one-note performer would be a huge mistake. He’s not Hollywood hot, but he plays a captivating male lead well. That same wide grin and slightly insane eyes make him an asset in playing an alluring object of the female and male gaze.

It’s tough to fault Willem Dafoe’s movies. But finding their trivia is a lot easier. Here are 10 minuscule trivia in Willem Dafoe’s Movies that only true fans notice. The Lighthouse is essentially a two-man show, with the majority of the film starring only Dafoe and Robert Pattinson. In this poster for The Lighthouse (2019), the clouds resemble the two main characters. Willem Dafoe plays the Green Goblin in Sam Raimi’s first Spider-Man film, which became one of his most memorable roles. Redditor u/B WAIN points out that Dafoe wore prosthetic teeth while playing Norman Osborn, but his real teeth are visible when he is shown as his Green Goblin persona without the costume: Willem Dafoe’s diabolical turn as mad wickie Thomas Wake in Robert Eggers’ modern horror classic The Lighthouse is one of his most impressive performances to date. Dafoe didn’t blink for more than 2 minutes while monologuing, according to director Robert Eggers. Sergeant Elias, played by Willem Dafoe, is the deuteragonist in Oliver Stone’s Platoon. Elias’ (Willem Dafoe’s) left hand is clenched because he is holding the remote control for the explosions seen earlier in the scene.

#5 How He Really Survives – ‘The Boondock Saints’ In The Boondock Saints (1999), it is established early on that Il Duce has only one rule: he does not [eliminate] women or children. As a result, Willem Dafoe’s character is the only one who survives his [misdeeds] in this scene.

When Spider-Man (2002) goes to punch Green Goblin, the stunt double’s lips can still be seen. This happens as Willem Dafoe says, “Impressive!”

#7 Packing Too Much Heat – ‘Antichrist’

Willem Dafoe collaborated with Danish king of controversy Lars von Trier on the art-house horror film Antichrist in 2009. He was supposed to do the scene full frontal, but the director opts for a body double because… he was on the bigger size, and that could distract the audience.

In John Waters’ exciting follow-up to Hairspray, Cry-Baby, Dafoe can be seen as a truly horrible corrections officer. Willem Dafoe improvised the scene in Cry-Baby (1990) in which he slaps Johnny Depp’s a**. When Norman Osborn talks to himself in the mirror in Spider-Man (2001), Willem Dafoe can be seen continuing the conversation as both Goblin and Norman. You can see Dafoe’s lips moving in the mirror during Norman’s line, “What do you want?” In The Lighthouse, Dafoe’s character is buried alive and then chopped up with an axe when he escapes. Sergeant Elias’ death is one of the most heartbreaking scenes in Platoon. The squibs that an actor was attempting to detonate as their character was [slain] in Platoon (1986) did not detonate. Oliver Stone, the director, liked the take and used it anyway. The death of the Green Goblin is one of the most memorable scenes in Sam Raimi’s Spider-Man. It’s from Amazing Spider-Man #122. Willem Dafoe’s character in The Lighthouse (2019) mentions “The Chicopee” when discussing how boredom affects sailors. The USS Chicopee was a real ship that was used to blockade Confederate ports during the Civil War, which would have been extremely boring for the crew.

7 Affluent Celebrities Who Don’t Leave A Penny To Kids