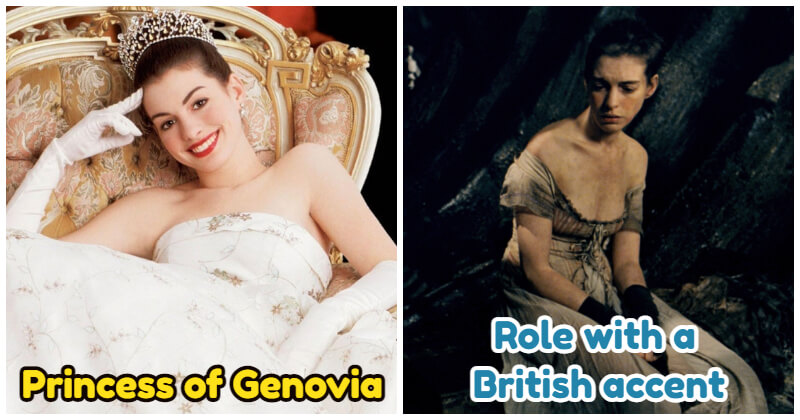 Anne Hathaway is one of the most talented actresses in Hollywood. She is not only an Academy Award and Golden Globe Award-winning actress, but also a vibrant vocal queen, loved by audiences of all ages. She has conquered the cinema world since the early 2000s with various roles. From a desperate heroin addict to a fashion magazine editor’s assistant to an uncomfortable high school, she gave all her characters the distinct charm that floats the boat of the viewers.

There was hardly a character that Anne Hathaway didn’t leave a mark on. Yet in this post, we curated the top 10 impressive roles in Hathaway’s career. The best for one may not work for another, but you can’t deny the success of these 10 following Anne Hathaway roles. Check them out and share with us your opinion. Get Smart is a movie that shows the incredible talent of Anne Hathaway. In the movie, she paired up with Steve Carell, who is a comedy star. It seems that there’s no chemistry between Hathaway and Carell, yet she made the combination so balanced without straying from her character’s drive.
This action spy comedy film revolves around Maxwell Smart (Steve Carell) and Agent 99 (Hathaway). Carell strives to fulfill his dreams of becoming a field agent, while Agent 99 serves as his slightly more serious counterpart. Anne successfully delivered a highly skilled secret agent with her impressive eyes rolling, sarcastic one-liners, and especially her skydiving martial arts and slinking under laser beams performance. “Ella of Frell” became a part of many childhoods, so people may be sad about this ranking. We can’t deny the beauty and talent of Anne in the fantasy comedy film. At this time, she was young and in the first years of her career. Yet she showed much potential as a movie star and became a children’s role model.
Anne played the titular character – Ella in the movie. Due to the “gift of obedience” from her fairy godmother, she must always do exactly what she’s told. Not only made many memorable scenes, but she also performed several full-on song and dance numbers. How amazing!!! Unlike Ella, Anne played a mature role with poise in The Intern. As a company’s bland founder and CEO, she struggled to juggle work and family. Hathaway created believability in her character, who always tries to advance. She responds to Jule’s life’s difficulties—from a cheating husband to job criticism—with subtly vulnerable strength. Despite having a 14 million dollar budget, this romantic drama made over 178 million dollars at the box office. The popularity of the film was attributed to its stellar cast, which also included Heath Ledger, Jake Gyllenhaal, Michelle Williams, and of course, Anne Hathaway.
Gyllenhall’s character is caught up in an extramarital affair, while Hathaway plays his estranged wife. Despite her minor role, it’s tough not to sympathize with her. She’s so competent at fading into character. In the powerful and emotional Interstellar, Anne portrayed Amelia Brand – a NASA scientist, and astronaut. Her top-notch acting played an important role in the success of this sci-fi movie. This is also one of Hathaway’s most physically demanding roles. The actress nearly died of hypothermia while filming a water scene in Iceland because her suit wasn’t correctly fastened. Despite this, she persevered through the difficulties and produced a fantastic picture. In Colossal, Anne plays an alcoholic writer who returns to her New England birthplace only to learn that her drunken activities have triggered the onslaught of a Godzilla-like monster in Korea. She uses her comedic brilliance to spar with Jason Sudeikis and then unleashes her dramatic skills as she grapples with how her inebriation affects the lives of others.

The film grossed slightly more than $4 million at the box office, despite a budget of $15 million. While it was a commercial failure, it was a commercial success for Hathaway. She integrated into the film even though it was outside of her previous acting experience. Rachel Getting Married centers around a drug-addicted lady who goes home from rehab to attend her sister’s wedding. Hathaway plays the drug-addicted woman rather than her sister.

She played the character with sincerity, stating that when she first read the screenplay, she burst into tears on the floor of her apartment. She definitely took those real emotions on set and, eventually, to the big screen. The human feelings in this one are genuine, and Hathaway brings them to life. Before she was operating a fashion startup in The Intern, Hathaway was trying to establish herself in the industry in The Devil Wears Prada.

Hathaway was surrounded by some of Hollywood’s most accomplished actresses, including Meryl Streep and Emily Blunt. Her abilities, however, were not eclipsed. She lets her character work hard and grow naturally as she strives to make ends meet as a co-assistant to a powerful fashion magazine editor (Streep). We recognize her for this job, and we adore her for it. Another successful product of Anne Hathaway. In the movie, she portrayed Mia Thermopolis, who is a shy and clumsy high school student. She discovered that she is a princess when her estranged grandmother (Julie Andrews) visits her. The film rapidly became an adolescent favorite, because of Hathaway’s dramatic and comedic acting abilities. The number of quotable lines in this film is astounding. Anne Hathaway is so talented that kicks her characters out of the park, but her role as Fantine in Les Misérables is at another level. She did this role with a British accent. That seems a tall order for an American, yet she fluently nailed it. Besides. the role required Hathaway to sing on set, resulting in one of the most heart-breaking interpretations of “I Dreamed a Dream” ever recorded. With all of that, Fantine in Les Misérables became the top-notch role in Hathaway’s career, which brought her an Oscar award.