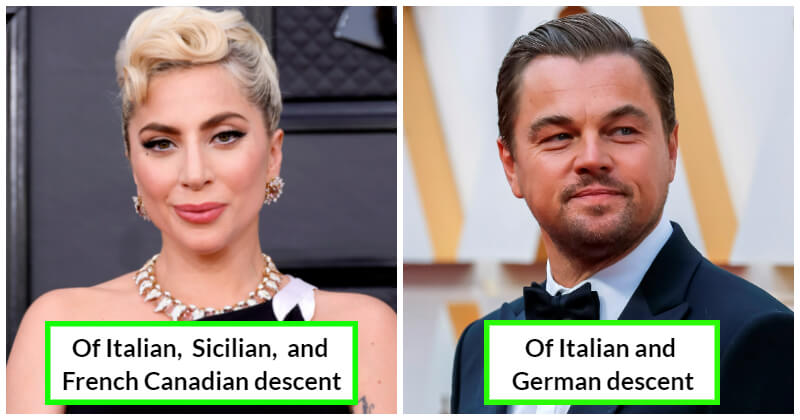 Many famous people are of Italian descent. Some of them are mixed while some are 100 percent Italian. Their appearance is hard to ignore. Regarding their careers, these famous people have hit their big time in different fields, from film to television to sports.

Some of the most famous celebrities of Italian descent in the world now? The songwriter and singer of “Poker Face” and “Applause” Lady Gaga, The O.C.” actress Rachel Bilson, “The Big Bang Theory” star Kaley Cuoco and No Doubt singer Gwen Stefani.

Regarding Lady Gaga, she is of Sicilian, Italian, and French Canadian descent. To embed her role in the 2021 American biographical crime drama film “House of Gucci”, Gaga spoke in an Italian accent for almost a year.

The list below includes 20 famous people of Italian descent. Scroll down to know more about their roots and successful careers. Lady Gaga is of Sicilian, Italian, and French Canadian descent. She is famous for the hit songs “Poker Face” and “Applause.” Madonna’s father is Italian and her mother is French Canadian. Her biggest hits include “Papa Don’t Preach,” “Like a Prayer,” “Vogue,” “Secret,” and “Ray of Light,”. Leonardo DiCaprio is of Italian and German descent. The Oscar-winning actor has starred in such films as ‘Titanic,’ ‘The Aviator,’ ‘The Wolf of Wall Street’ and ‘The Revenant.’ Hulk Hogan is of Italian, French, and Panamanian descent. He was one of the most beloved figures in the WWE during the 1980s. Lindsay Lohan is of Irish, German, and Italian descent. The “Mean Girls” star has become a tabloid magnet since the early 2000s. Jennifer Aniston’s mother Nancy Dow is of Scottish, Irish, and Italian descent. She is best known for her role as Rachel on the hit sitcom ‘Friends,’ and such movies as ‘The Break-Up,’ ‘Horrible Bosses’ and ‘Cake.’ Gwen Stefani’s father is Italian. She is the founding member and lead singer of the ska-pop group No Doubt and as a solo artist. Kaley Cuoco is of Italian, English and German descent. She is best known for playing Penny on the popular sitcom ‘The Big Bang Theory.’ Alyssa Milano is of Italian ancestry. She rose to fame after starring in the sitcom ‘Who’s the Boss?’ Sylvester Stallone is of Italian, Russian, and French descent. He is one of the biggest action stars in the world and is best known for portraying boxer Rocky Balboa and Vietnam War veteran John Rambo. Rachel Bilson’s mother is Italian. She is best known for starring in the TV shows “The O.C.” and “Hart of Dixie.” Steve Carell is of Italian, German, and Polish descent. He has earned acclaim for his comedic work on TV series such as ‘The Daily Show with Jon Stewart’ and ‘The Office,’ and in films like ‘The 40 Year-Old Virgin’ and ‘Foxcatcher.’ Demi Lovato is of English, Irish, Italian, and Mexican descent. She is a successful actress and recording artist with hits like ‘Skyscraper,’ ‘Cool for the Summer,’ ‘Heart Attack’ and ‘Sorry Not Sorry.’ Christina Ricci is of Irish and Italian descent. She is best known for appearing in “The Ice Storm” and “Mermaids”. Brittany Murphy was of Irish and Italian descent. She appeared in critically acclaimed films such as ‘Clueless,’ ‘Girl, Interrupted’ and ‘8 Mile” Marisa Tomei is of Italian descent. The Oscar-winning actress has starred in films such as ‘My Cousin Vinny,’ ‘In the Bedroom,’ ‘The Wrestler’ and ‘Spider-Man: Homecoming.’ Vince Vaughn is of Italian, English, Irish, German, and Lebanese descent. He made his appearances in such films as Swingers and The Break-Up. Martin Scorsese is of Italian descent. He has produced some of the most memorable films in cinema history, including ‘Taxi Driver’ and ‘The Departed.’

Selena Gomez’s father is of Mexican ancestry. She is a former fixture in the Disney universe of TV shows, movies, and music. She is now a solo artist and philanthropist.

What If These 12 Iconic Historical Photos Are Revitalized With Color?