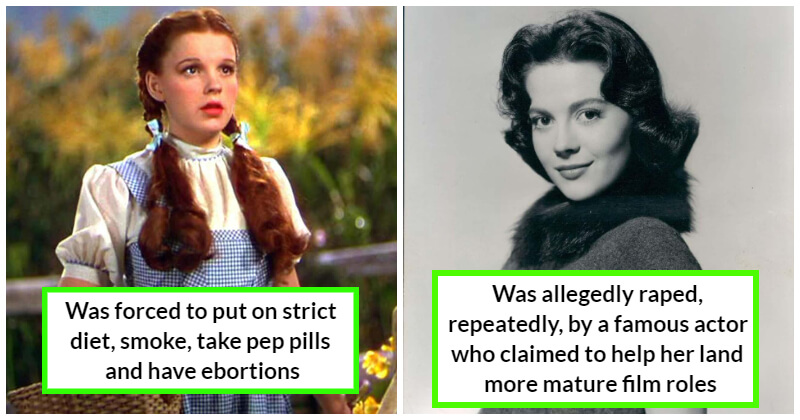 The road to fame is never a bed of roses. This is completely true if you take off your career from zero or start out at a very young age. If you weren’t born privileged or are taken under other big stars’ wings, you will certainly witness how brutally competitive and cutthroat Hollywood is.

Leading Hollywood stars have dedicated years of hard work, along with sweat and tears, to get their name globally recognized and earn a star on The Hollywood Walk of Fame. For child stars, they suffer tremendously along their path to stardom. Some don’t dare to reveal the dark side of their famous life as their managers and companies keep close eyes on every move of them.

It’s sad but true that many old Hollywood child stars were physically and mentally abused for such a long time. When terrible secrets behind their glorious life and happy veneer were unveiled, they shocked the world. Take Judy Garland, for example. She was forced to put on a strict diet to maintain her weight. That was not all. The 14-year-old girl, and her onscreen friend, Mickey Rooney, were fed a near-constant supply of pills to stay in performance mode. Human does inhuman things. This is exactly the way MGM treated their child stars. A “fat little pig in pigtails.” It sounds offensive but this is exactly what MGM told 14-year-old Judy Garland when she first tried to enter show biz. The studio immediately forced her to put on a strict diet to keep her weight. When Garland was 18, she was encouraged to smoke 80 cigarettes a day to avoid her diet-breaking actions. That was not all. She was forced to take pep pills to keep her awake and quell her appetite. MGM fed Judy Garland And Mickey Rooney a near-constant supply of pills to keep them in performance mode.

#3 Natalie Wood was allegedly raped by a famous actor At age 16, Natalie Wood was allegedly raped, repeatedly, by a famous actor who claimed to help her land more mature film roles. Although the identity of her attacker has never been unveiled, rumors have long persisted that it was Kirk Douglas. When Shirley Temple was 12, she was looking to transition to more grown-up film roles. She was invited to Arthur Freed’s office in which she almost fell victim to the casting couch. Freed unzipped his pants and exposed himself to the pre-teen. Temple was frightened and nervous by the unexpected turn of events, but she later burst out giggling. The incident ends up with the shouting: ‘Get out!’ from Freed. Tommy Kirk’s career reached its peak in the 1950s and ’60s, becoming one of the most popular and prolific child actors of the era. However, he was fired by Walt Disney after he found the bona fide Disney superstar was gay. “I was caught having sex with a boy at a public pool in Burbank. We were both young, and the boy’s mother went to Walt,” Kirk told Movieline. “I was quickly fired.” Judy Garland was sexually assaulted on the set of The Wizard of Oz. Some of the actors who portrayed Munchkins groped her, putting their hands under her dress. These men were 40 or more years old.

#7 Bobby Driscoll was fired because he got acne during puberty Bobby Driscoll was an acclaimed child star throughout the ’40s. He starred in dozens of high-profile movies and even won a juvenile Academy Award. However, Driscoll was fired by Disney and the contract was canceled. The reason sounds silly. He got a serious bout of acne during his puberty. The child superstar ended up drifting for the rest of his life, and eventually dying, penniless and alone, in 1968 at age 31. Jackie Coogan was a famous, beloved face in popular movies like Charlie Chaplin’s The Kid, Oliver Twist, and Tom Sawyer. The child actor had amassed a fortune somewhere between $3 and $4 million. When Coogan turned 21, however, he discovered that his mother and stepfather squandered all his fortune. Though he sued them and won, he only recouped about $126,000, after legal fees.

#9 Jay North was abused by his aunt Jay North was physically and verbally abused by his aunt whenever he didn’t meet her exacting standards. She isolated him from the rest of the cast, and she even dyed his hair to keep its best form. He lived in a world tightly controlled by his abuser. MGM tried to remake Elizabeth Taylor into their own image of what a star should look like. They had her baby teeth pulled out and forced her to wear braces.

#11 Allen Hoskins was forced into a damaging African American stereotype W.C. Fields believed that 16-month-old Baby LeRoy was stealing scenes from him, so he used to swear at the baby in front of the camera.

#13 Judy Garland was forced to have two abortions When Judy Garland got pregnant at 20 years old, MGM and her mother forced her to get an abortion. When she became pregnant again and, again, she was forced to have an abortion. Garland herself called the abortions “inhumane actions” and never forgave herself.

All Information About Avatar 2: Release Date, Cast, Trailer And Leaks About ‘The Way Of Water’

20 Harry Potter Actors Who Passed Away