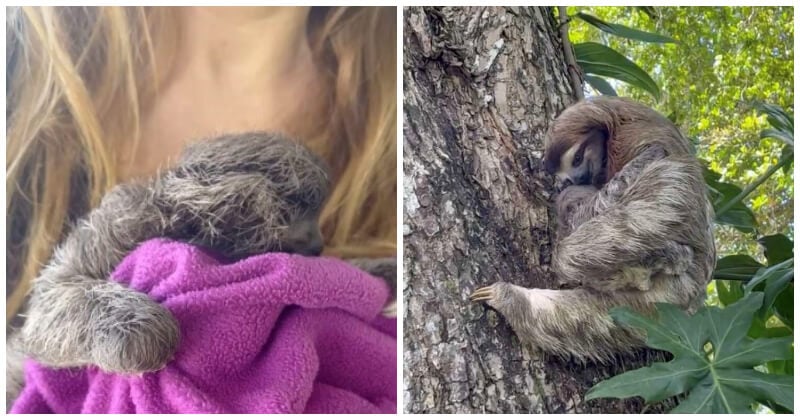 Maternal affection is always appreciated. Not only humans but children and mothers of any other creatures also have a special link. Workers in a Rescue Center have many opportunities to witness these sacred feelings through the reunions of animals. However, they will still become emotional to watch such touching moments no matter how many times they have seen them.

Lately, a staff member at Jaguar Rescue Center in Costa Rica shared a moving story about the sloths he found near the beach. He was heading back to the center after checking out a case of an injured animal at that moment. Out of the blue, he caught a whistle blending into the ocean sound and realized it was a baby sloth’s cry.

“He heard the cry and immediately recognized it was a baby sloth (their cry is like a whistle),” Noelia, a member of Jaguar Rescue Center, remembered. After a few minutes of searching, the man spotted a little sloth on the sand. The mother was climbing up to the top of the tree, oblivious to the disappearance of her baby. The rescue team guessed that the baby fell out and tried to draw his mother’s attention by crying. Unfortunately, due to the noisy waves, his voice did not reach the mother.

“He saw the mom on the tree, but she was climbing back to the top. We believe the baby fell from his mom and he cried to attract her, but because of the noise at the beach, she probably didn’t hear him.” After looking over the baby sloth to ensure he was alright, the team gave him water and time to rest. They determined that the animal was just a few weeks old, so they planned to reunite him with his mother. The rescuers recorded the baby’s crying and played it via a speaker so that the mother could hear it clearly. The adult sloth headed down the tree right after she recognized her baby’s whistle. After two hours of waiting, the team could finally give the baby back to his mother. The mother hugged her baby tightly when she eventually held him in her arms, which melted everyone’s heart. She must have missed him so much and felt thankful to the kind rescue team.

“When she grabbed him, we [could] tell she missed her baby so much and was grateful to have him back,” Noelia said. “It was an emotional moment for all of us, and we hope this mom and baby [do] stay safe. It melts our hearts every time we can witness the reunion of a mom and her baby.” Do you believe that all animals have maternal affection? Have you ever witnessed a reunion of animals? How do you feel about it? Please write your thoughts down and share this moving story with other people!

Do Cats Miss Us When We Leave?

Get To Know About Tree-Kangaroos, The Kangaroo’s Fluffy Cousin You Likely Hear Of For The First Time