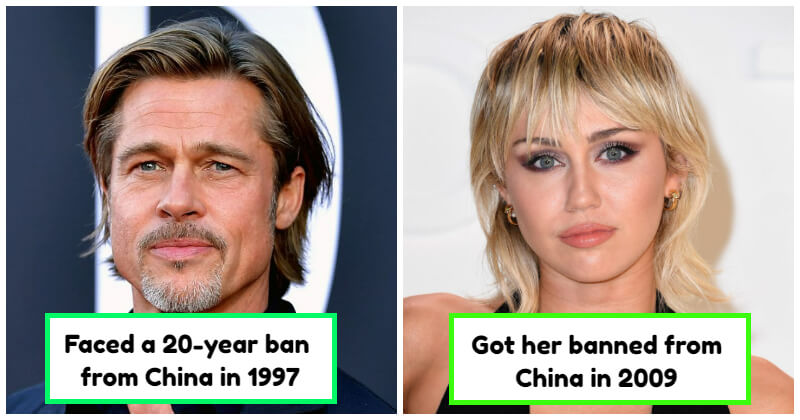 In this post, we’re gonna talk about 5 Hollywood actors who are banned by China. In recent years, China has stepped up censorship of American films, expanding it from cutting a few scenes to banning an entire film. Many film producers resort to altering film scripts to suit the needs of “the dragon”.

China has also expanded its restrictions to many Hollywood celebrities, including leading actors and actresses. Take Brat Pitt, for example. He faced a ban on entry to Chinese territory, which was only lifted in 2016.

Scroll down to know which Hollywood actors are banned from China and the reasons behind it. Following the release of the biographical war drama film “Seven Years in Tibet” in 1997, Brad Pitt faced a ban in China for 20 years. The actor portrayed the 14th Dalai Lama’s tutor, however, the film offended the ruling communist party as it described the Chinese occupation of the Tibetan Plateau. Pitt’s ban was only lifted in 2016. Harrison Ford and his wife, Melissa Matheson, have been banned from entering China since 1995. Ford is a human rights advocate and he was involved in Tibetan issues in 1992. Meanwhile, his wife wrote the script for the film Kundun which tells the story of the early life of the 14th and current Dalai Lama. China imposed a ban on Richard Gere following his impromptu speech about the human rights abuses that China did with Tibet, at the 1993 Academy Award. That speech also impacted the career of the actor. Many major studios refused to cast him to ensure Chinese distribution to increase their profit. On May 12, 2008, Sichuan Earthquake occurred in the mountainous central region of Sichuan province in southwestern China and caused immense losses, killing at least 90,000 people. At the Cannes Film Festival in the same year, Sharon Stone blamed the Sichuan Earthquake for bad karma built up by the Chinese for oppressing the Dalai Lama. Selena Gomez met the Dalai Lama in the rehearsals for the 2014 We Day Vancouver event. The teen idol, then, posted the picture on her Instagram and Twitter. This action, unfortunately, got her banned from China. She didn’t even notice the ban until two years later when she was planning tour dates in China. Miley Cyrus was banned from China in 2009. The pop-culture icon posted a picture of her imitating Asians by pulling back the skin around her eyes. Not only did the Organization for Chinese Americans have strong words about the picture, but it also got the Chinese government angry. That picture earned her a ban from entering the Chinese territories.