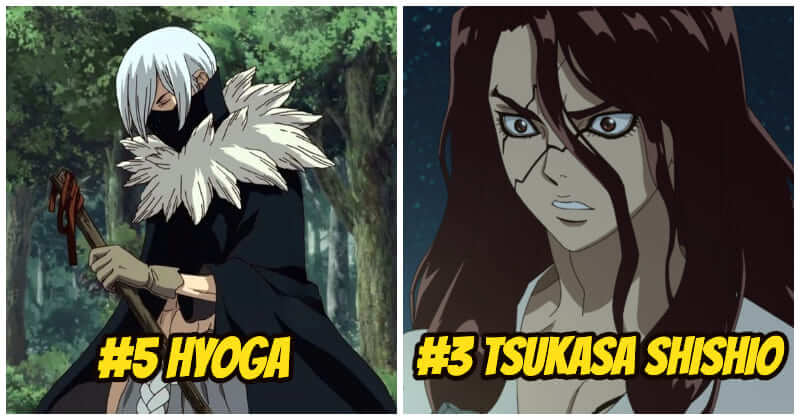 Hearing about the concept of a shonen anime based on scientific investigations for the first time is likely to make you laugh out loud. When it comes to providing a new shonen series that will be engaging from the get-go yet distinctive enough to keep fans hooked for the longest period, Dr. Stone succeeds where others have failed by weaving its themes around the science concept. And this list will provide you with the 9 best Dr Stone characters who play vital roles for that.

Of course, it helps that the show’s characters are also incredibly wonderful in their own right and have made each scene they’re involved in enthralling for different reasons. Their developing personalities and contributions to the story’s overarching themes are both products of the character arcs the writers gave them. Kinro was a determined and strong-willed character in the Dr. Stone anime who never let his weaknesses get the best of him. The moment when he overcomes his nearsightedness by trusting in science is memorable in the anime, even if his role diminished as the manga progressed. Taiju is an interesting, if hackneyed, character, but he wasn’t given much attention early in the anime. Taiju will get more screen time as the series goes, and it’s only a matter before the anime gives him credit. Yuzuriha, Taiju, and Senku are the anime’s three main characters. Therefore, the lack of focus on the first two is aggravating yet understandable. Given that Senku and other Stone World dwellers needed to learn the basics of science, shifting the series’ focus to them was a smart move. This hurt Yuzuriha’s character, but succeeding arcs would focus more on her. Suika’s transformation after Senku corrects her eyesight makes her a bright and refreshing character in the story. Her charming design and quirky demeanor make her a series favorite. Hyoga is another character who hasn’t displayed his true colors in the anime yet, but he will as it goes. According to manga readers, his dynamic with Tsukasa will be fascinating to explore in the series. Kohaku’s well-rounded personality dispels the misconception that the Stone World lacks honor and morality. Her introduction and actions to defend her sister indicate an exceptional character who will build a lasting bond with the series’ protagonist. The series’ adversary is an interesting aberration whose mind process most people can identify with, while his execution is questionable. Fans can’t wait to watch how the Senku’s Kingdom of Science does against the Tsukasa Empire. Old-world characters are interesting for many reasons, and Gen Asagiri is no exception. Gen first seems like a greedy double agent who would let the Kingdom of Science fail before it became a threat, but his common sense takes over when he understands how powerful science can be in tribal culture. After drinking cola for the first time in the Stone World, the excitement on his face demonstrates how he turns to science. Senku’s character is memorable despite not falling into the usual shonen tropes. Senku is arrogant, self-centered, and snarky, but he’s smart and loyal enough to be a stand-up figure despite being unlikeable. Dr. Stone has a competent protagonist, given his character’s groundbreaking and unusual.

If you find the list the of nine best Dr Stone characters interesting, don’t hesitate to visit our website Aubtu.biz to get access to more news and information related to your favorite anime movies.

Most Shocking Celeb Deaths Of All Time

Scenes From 12 Blockbusters Are Hilariously Re-Filmed Today By Photoshoppers