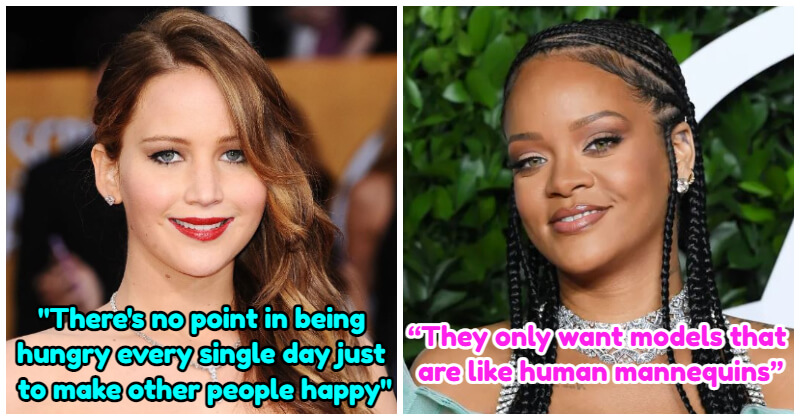 Hollywood is full of endless unrealistic beauty standards that make many celebs feel like they aren’t good enough. Therefore, many opt for dieting which can lead to eating disorder symptoms and mental health concerns. It’s undeniable that the diet culture has become widespread in today’s generation. There is never-ending pressure to lose weight and become thinner as fast as possible. For celebs, they are also pressured to be an inspiring and healthy role model for the younger generation, so it’s hard for them to stop dieting.

While plenty of celebs are still okay with it, others refuse to fall victim to these absurd rules. They break down the norms on how they should look and live their own lives. When many have protested restrictive eating for weight loss, the diet debate is reaching a boiling point – perfect for cooking up some carby pasta.

Below are 8 celebs who spoke their minds against toxic diet culture. Jameela Jamil consumed many bad products and followed many toxic diet tips to maintain her weight for a long time. However, she stopped doing that and felt like a liar speaking about their diet routine. She shared these tips harmed her metabolism and digestive system. Mindy Kaling underwent tough diet so she understands its harm. She stopped eating and it made her feel in a state of deprivation instead of looking great. Since then, she refuses to put any pressure on herself about her look and never thinks about dieting again. Jennifer Lawrence criticizes shows that are teaching young generations to judge other people and keeping unrealistic expectations for women. Fashion Police show is one of them. The actress encourages others to look how they look and be comfortable. Rihanna defies what the fashion industry is doing to make women have an unhealthy attitude toward their bodies. She advises girls not to try to be as thin as human mannequins because it’s not realistic and not healthy. On Katie Couric’s podcast, Amy Schumer shared that for a role, she tried to lose some weight. However, after all, she realized that beauty and body were not her currency. She simply opts for loving what she is right now rather than living in eternal dissatisfaction. Camila Mendes experienced a toxic diet for a long time but she decided to stop it. She advises her fans to unfollow unhealthy habits and encourages them to eat more nutritious food and exercise regularly. Demi Lovato agrees that diet culture is increasingly popular when weight loss pills or fitness routines are everywhere. Not only youngsters but celebs believe in promises of magic results. Demi Lovato tried to lose weight but stopped it after then. Now, she feels happier without it. Lili Reinhart has been an advocate for body acceptance. Before that, she used to starve herself for the sake of the Met Gala, and then she regretted it. She asks to stop supporting “celebrities whose entire image revolves around their bodies”.