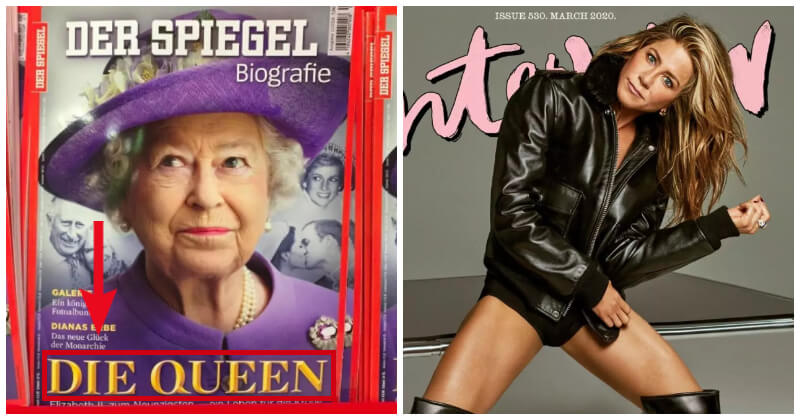 “Cover stories are crown jewels that are coveted by celebrities,” said Vanessa K. De Luca, editor of Essence. “Our covers are usually influential and are a way to say that certain celebrities are relevant, of the moment, and attention-getters.”

For that reason, celebrities often appear on magazine covers. And the magazine carefully selects famous faces to attract a wide audience and enhance their credibility. Still, many celebrities have repeatedly embraced their beauty on the covers of the most famous magazines.

However, some celebs actually regret creating some forgettable images on magazine covers (or have misunderstandings coming from the magazine cover editors that lead to a completely embarrassing situation). They later found out these shoots were totally awkward and that even their beauty, fame, or any couldn’t cover up their weird images. Below are 20 totally awkward magazine covers people regret ever doing. Scroll down and enjoy! Jennifer Aniston is such a superstar that she can’t seem to do anything wrong. So it was really a shock to see her weird March 2020 cover for Interview magazine. The actress stood in a squat style on the desk while wearing nothing underneath but a pair of panties and thigh-high boots.

While she still looked pretty, her awkward posture made everyone angry. The set of photos also caused a stir on social media with criticism of the cover. Some were shocked that she posed in such a provocative way, while others compared her to a broken doll in a toy box. Sarah Jessica Parker’s name goes hand in hand with fashion thanks to her role as stylish Carrie Bradshaw on the hit show Sex and the City. While we’ve seen her on the covers of many magazines, she looked a little different on the March 2013 cover of Harper’s Bazaar China.

They edited her face so much that the actress was barely recognizable. From the smooth skin to the frenzy of blue eyes, there’s no way one could be without poor editing. We’re not sure who they think they’re fooling. Fans are head over heels for Betty White since she was on the show Golden Girls and in movies like The Proposal. In honor of the actress’ 100th birthday, People magazine published a cover commemorating her life in January 2022. In a heartbreaking turn of events, White passed away on December 31, 2021, just 17 days before her 100th birthday.

While fans mourned the loss, one awkward situation emerged. Everyone’s cover story appeared on newsstands. While it was considered poor timing, it was comforting to see her smiling face after her death. CNN contacted the magazine to inquire about the alleged photo shoot of Priyanka Chopra’s armpit area, but they did not receive a response. No surprises there, right?

#5 Hello!: The Emo Duke Of Cambridge Prince William appeared on the cover of Hello! February 22, 2010! Someone in the styling department decided that he would look better with a full head of dark hair instead of his signature thin blonde hair. It’s such a stark contrast that the cover has become the butt of many jokes. It’s sad because he looks really cute with black hair. Maybe he should consider making a change. Prince Harry and Meghan Markle on the cover of Time magazine’s “100 Most Influential People” on October 4, 2021. Social media lit up with comments roasting the cover due to their heavily airbrushed faces. Some people think that the photo looks like CGI. Other readers commented that it looked like Markle wore the pants during the relationship because of the way Harry hid them behind her back. Even so, the covers are pretty awkward when they arrive. Olivia Munn was the victim of an epic Photoshop glitch when she appeared on the January 2016 cover of WebMD. The edited image not only makes her head look much larger than her body, but her chest also looks a bit wonky. Carrie Underwood must have been so excited when she was offered the chance to be on the cover of InStyle magazine in December 2010. There was one problem. in another Photoshop glitch, the editors somehow made her right wrist disappear completely. She has to be the one to shape her arms to be able to bend in such an unnatural way. She must have been embarrassed to appear on the cover of a Hollywood-style magazine. Demi Moore somehow seems to defy her age and looks more beautiful as she gets older. However, her 2009 cover for W magazine left readers scratching their heads. Looks like her left hip has been Photoshopped. Moore took to Twitter to defend the photo, insisting it had not been edited. Still, it was clear that it was smudged a bit. While it’s a nice picture of Zac Efron, there’s only one problem: his left arm looks completely amputated! Although he could have had a chiseled physique that arm looked too biological for it to be. He looks pretty much like the Terminator. Not that we’re complaining or anything. Glamor magazine featured Kristen Stewart on their November 2011 cover and the whole thing was a Photoshopped mess. Readers quickly realized that they had completely edited Stewart’s left arm, which appeared to be haphazardly placed behind her knee. It didn’t help that she was sitting in such a strange position. Taylor has graced the cover of many magazines, but this one takes the cake. She was featured on the front page of a Russian magazine and looks more like a victim of bad Photoshop than her icon. They looked at her face so much that you could hardly tell it was her. What is believed to be a tribute to Queen Elizabeth II appeared as a death wish on the cover of the German print magazine Der Spiegel in August 2016. At least it will appear that way to English speakers. But, anyone who knows German knows that the word “death” simply means “that”.

#15 CineBlitz: Two Heads Are Better Than One The photoshoot caused a bit of controversy. According to an article published by Asianet News, “the photo shoot was done in 1996 and made many people uncomfortable.”

However, the models, Kajol and Rekha, said it was a fun photo session, according to Asianet News. Still, years later, after the photo shoot, the two met up, and “they mocked its idea and took it very lightly.” Here are some more tweets from other unhappy Britney Spears fans: “Who put that wig too low on Britney’s head?” —@iBraglots

“Who let this happen? Brit is in a crooked hair hat, not a wig.” —@Piaglenn

And here’s the magazine’s apology for the December 2012 cover photo: “Thank you all for sharing your thoughts on our cover! As always, we will share with our team and we’re sorry to have let some of you down.”