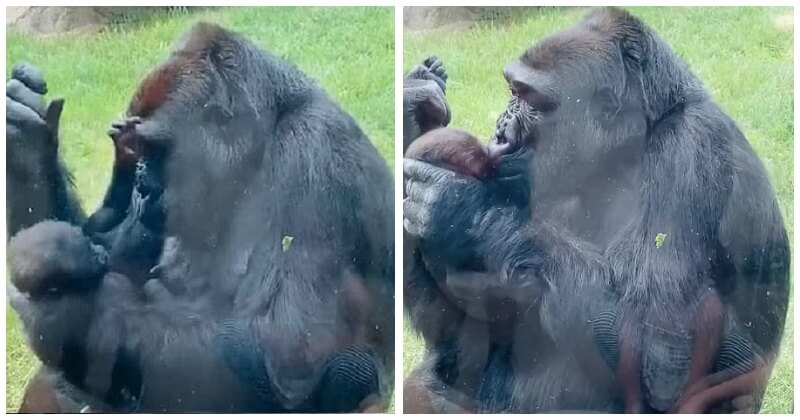 The Calgary Zoo witnessed this amazing moment when a female gorilla introduced her young child to visitors. The gorilla is seen in the video below, cuddling her newborn and kissing its forehead before picking it up and lifting it into the air.

“Oh my goodness!” someone can be heard saying in the video. “Did she just give it a kiss?” Says another woman to the gorillas: “Thank you for showing us!”. The original post’s comments were filled with people calling for the animals to be freed, while other people argued against it. The Calgary Zoo is home to six adult Western Lowland Gorillas, and with the birth of this baby, we are one step closer to rescuing the gorillas.

According to Calgary Zoo, the wild gorilla population has decreased by 80% during the past 30 years. This is a result of habitat destruction and poaching, primarily due to the highly sought-after mineral coltan, which is required for the manufacture of cell phones.

The fact that these creatures are held in zoos mesmerized the audience while also making them sad. Animals should be left in the wild, according to a user. Another person retorted that zoos are safer places for wild animals. If they were wild animals, poachers would hurt them. Zoos are dedicated to study and conservation and have breeding programs. Animals like California condors, Red wolves, oryx, Hellbenders, and Okapi would become extinct without zoos.

That Simba moment was a once-in-a-lifetime moment, which amazed us greatly. We would love to hear about any similar unforgettable moments you have experienced! Leave them in the comment section below!

Husband Gets Bitterness Being Asked To Scoop Cats’ Litter By His Pregnant Wife, Reddit Is Disappointed With Him

Need Some Cuteness In Your Life? Then Check Out These Cute Photos Of Animals

Having A Fit Healthy Pup, Man Is Accused Of Starving His Dog