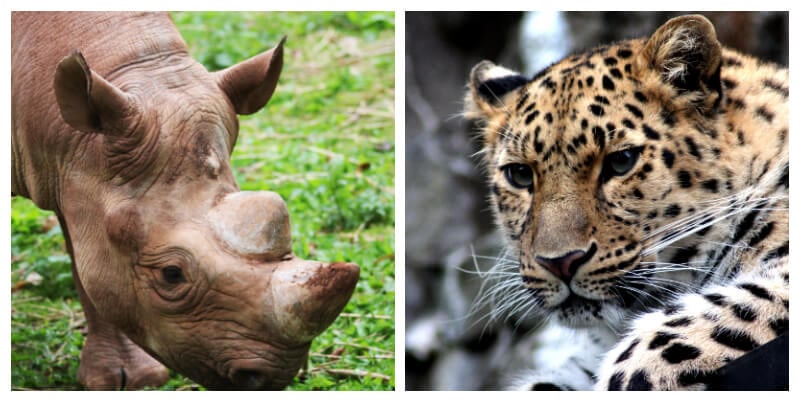 Some endangered animals are nearing the end of their time on Earth. Poaching, habitat degradation, and the consequences of climate change are some of the issues that make humans the biggest threat to the survival of endangered species. Due to poaching and habitat destruction, the number of Javan rhinoceros has declined dramatically. One of the rarest rhino species, Javan rhinos only exist in one natural population of about 75 animals on the Indonesian island of Java. The Ujung Kulon National Park, a World Heritage Site, is the last remaining refuge of Javan rhinos. The small Javan rhino population is also extremely vulnerable to extinction due to natural catastrophes, disease, poaching and potential inbreeding. The Amur leopard is one of the rarest big cats in the world, with only around 100 individuals left in the wild. Although their wild population seems to be stable and increasing, these leopard subspecies are still critically endangered since 1996. The remaining Amur leopards face multiple threats to their survival, including habitat loss and fragmentation, prey scarcity and transportation infrastructure such as roads. One of the seven types of marine turtles, the hawksbill turtle lives in tropical and subtropical waters close to shore. Hawksbill turtle populations have decreased by at least 80% globally during the past 30 years as a result of illegal trade in hawksbill shells and other items, habitat deterioration for nesting turtles, damage to coral reefs, and accidental catch in fishing gear. Future risks brought on by humans, like plastic pollution, climate change, and increasing sea levels, may have a greater impact on the extinction of this species. Hawksbill turtles are currently classified as severely endangered. Orangutans in Sumatra are similarly threatened to those in Borneo and Tapanuli. From illegal pet trafficking to agricultural plantations, rising infrastructure development, and logging. Large expanses of connected forest are necessary for orangutans to survive, yet between 1985 and 2007 they lost 60% of their forest habitat.

Being the only live freshwater porpoise in existence makes the Yangtze Finless Porpoise unique within its family. Many animal species that call the area home are suffering as a result of years of environmental degradation, overfishing, and water pollution. Historically, finless porpoises and Yangtze river dolphins coexisted, but for the past two decades, no freshwater dolphin sightings have been reported. Sadly, this may serve as yet another sobering warning of what many endangered animals, like the Yangtze finless porpoise, may experience in the near future. Aubtu.biz is a website that provides you with entertainment information and creative ideas to refresh your days.To know more about updated animals facts, visit our site daily.

Dropping Sister-in-law Due To Her Dog, Woman Berated By Mother-in-law While Winning Redditors’ Support